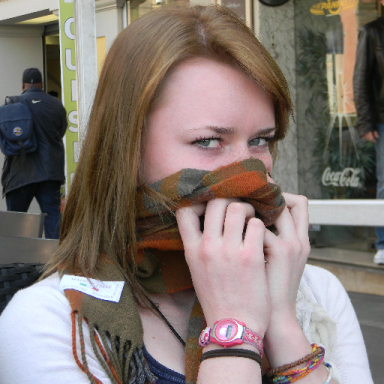 Have you ever wondered what decisions you would make if no one was watching? Probably only if you’re a Type-A bride who has been scrounging Instagram accounts, blogs, and different internet accounts for wedding inspiration for the last 12-some-odd months while watching wedding TV shows like Say Yes to the Dress and some of the most popular wedding movies out there. Oh, wait, that’s just me. So, I wonder what I would do if nobody was watching, and sometimes I have to remind my family and friends to remind me that I like to ask myself that. Also, that asking myself that is important because it makes me pause and consider if what I’m doing, planning on doing, embarking on, whatever… if I’m doing that thing in a manner I’d do it if no one was watching.

Because if I’m acting in any other manner, it means I’m trying to please someone that isn’t me. I don’t mean that selfishly — just that I need to please myself a bit because I have, for so long, worked to please everyone but her. And that’s why I didn’t want to go on my honeymoon directly after my wedding.

It’s a difficult and slow process, but I promised myself there were certain things I wasn’t going to bring with me after I got married. There were some things I’d leave behind in the last chapter, you know? I’ve spent a lot of time with me, myself, and I over the last few months trying to understand who I wanted to be, where I wanted to be, and what that might take from me. I’m a too-much type of person, but I don’t want to be too much in my own way anymore, and that means slowing down.

How do you dial down the speed when it feels like the world around you must go millions of miles an hour? You can’t accomplish anything if you’re not speeding along, working away, slaving to the idea of productivity when all you’ve done is created a cycle of frustration, anxiety, and oh… wait … too much.

I’m not going on my honeymoon right away because emotionally, I need time to have a hangover. I have panic attacks – can you imagine getting on a plane the day after your wedding when you’ve basically changed your whole life with the two words: I do? I, for one, cannot.

One thing I know for sure, now, is that there is no wedding police, which is why I’m not going on my honeymoon right away. Both me and my soon-to-be-husband work full-time jobs (Read: jobs) and have so many other responsibilities that make it impossible for us to jettison off for two weeks to Europe where we’ll grace some tourist-funded town with our presence. It’s complicated to take the average week off for a honeymoon located somewhere in the domestic U.S. anyway, even if you’re only headed to Charleston for the weekend.

What’s more is that after we’ve spent near the national average, planning our wedding, it feels like we’re supposed to jet set off into the sun at some far off, probably exotic location to enjoy our newlywed feelings. The average honeymoon costs $5,342, but even domestic spots for honeymoons like Hawaii can cost a pretty penny.

For the most part, people in my mom’s group of friends and peers recollect their honeymoon as this stellar adventure. Before I continue, let me remind you this is a demographic of women who still thought it was pretty scandalous to life with your significant other before you got married. Most couples I know wait a year or so before they move in together, and this survey proves that’s a pretty average timeline to move in with your significant other.

But I don’t know anyone who didn’t live together before they got married.

I don’t know about you, but I’m often not sure about taking a few days off of work — let alone two weeks. The horror – in a row. We don’t really have the luxury of doing that because I work a full-time job, and so does my soon-to-be husband. He’s a hockey coach of a team that travels all over the country to play others at their skill level. They’re headed to nationals next week, which is to say I haven’t seen him since September.

And honestly? I want to enjoy my honeymoon. I want to get to sit on the beach and drink fun cocktails, soak up the sun, and really relax after the long engagement we had and the wedding planning and everything in between.

I think other women should be more vocal about their decisions in their wedding planning process because the fairytale wedding doesn’t exist in modern times. Apparently, postponing your honeymoon isn’t even a new trend, according to this 2012 article. And we modern women need to be able to band together and support one another for the choices that are best for us instead of leaning into societal pressure that’s everywhere.

I’m very good at pretending I know about “girly” things.