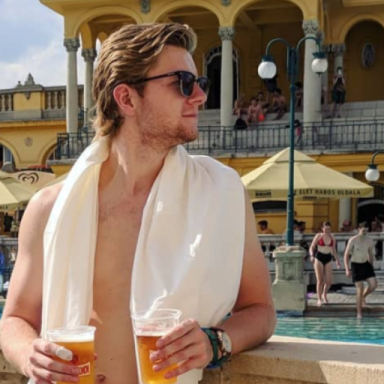 Two single people meet each other for the first time. From the moment their eyes first meet, their interactions are hugely influenced by variables that aren’t apparent to either party. When one person’s universe crosses paths with another, they don’t always line up.

The variables aren’t always the things you think would impact a new relationship, like an old breakup or a recent bad date. Most of the little variables hover under the surface, unrecognized, subtly impacting every word and action.

When two people strike up a conversation, they enter each other’s worlds. They don’t knowingly leave their own world, but the other person’s universe bleeds into theirs, and that has an affect.

Today, somewhere in the world, there is a man waiting for a bus. This man has his own ideas about who he is, where he’s headed, and what kind of girl he’s looking for in life. Somewhere, there’s a woman walking up to this bus stop with her own ideas about who she is, what she cares about, and what the last month of her life has been like.

As she removes her earbuds, she asks him how long he’s been waiting. He looks at her, and though he does not know it, he is staring into another world that does not align perfectly with his own. His world is different. He’s living in a sunny morning, a lovely date he went on last night, and a smile from his favorite barista. He feels good, his world is bright and sunny, and he lets that light out with his answer and smile.

The girl may not bring so much joy to this interaction. She brings her missed alarm, her rushed coffee and burnt toast, and the lingering ache from the guy who refused to commit three months ago. She is not looking for love at the bus stop. She’s looking for an answer so she can get to work so she can avoid being late. Twice in one week is enough.

“Honestly, I’ve been waiting forever. Twenty minutes. It should be here soon though, “ he says.

That could be that. She got her answer — the man at the bus stop with the cozy pullover had given her what she needed. She wishes she had his cozy pullover. As she goes to the bench to sit down, she puts her headphones in her pocket instead of back in her ear. Maybe a conscious decision, maybe not.

The man waiting for the bus in his favorite pullover thinks she left the headphones out on purpose. The lack of headphones seems like an intentional opening. It’s 8:10 a.m., and it’s the bus stop, but he feels optimistic, so he asks her, “Do you catch the bus here every day?”

He doesn’t know what else to ask. Small talk at the bus stop should be focused on busses, right? As soon as he asks the question, it feels bland, but it’s out there.

She looks up from her phone, instinctively reaching to pull her earbud out, then realizing it’s not there.

“Huh? Oh, no, I’m just late today and sometimes this bus is faster. Guess not today, though.”

After giving her reply, she looks back down at her phone. To her, the man in the pullover is just… there. He seems nice, but her morning has been hectic and she relishes the stillness that she finds at the bus stop. When there’s nothing to do but wait, there’s nothing to worry about. She skips back 30 seconds in her podcast and reaches for her headphones.

The guy notices her attention turn away from him and towards her screen. He doesn’t want to push it, so he doesn’t.

His morning—and his life, really—is going so well. This attempted conversation is the first thing that hasn’t gone well in forever. Things have been going so well, in fact, that he decides to take a seat on the bench next to her. Not right next to her, of course. That would be weird.

He waits on the bench optimistically, thinking she’ll notice that he attempted to start conversation. Maybe she’ll reciprocate. He’s optimistic that she’ll pick her head up at any moment and look him in the eyes.

She’s not going to. She’s happy to have a moment to forget about all the recent stress in her life, and she isn’t about to give her time away to a stranger at the bus stop. Another day, another time, maybe. She likes strangers usually. Today, though, she’s found a little bit of peace, and she doesn’t want to give it up.

The bus comes a minute later. She finds the last seat in the front of the bus so she takes it. The man walks past her to the back of the bus, glancing down and briefly catching her eye. Was she staring at him or was it an accident? He smiles to himself as he sits down, confident in his assumption that she’s shown interest.

The girl presses play on her phone, closes her eyes, and continues thinking about everything except the man in the back of the bus.