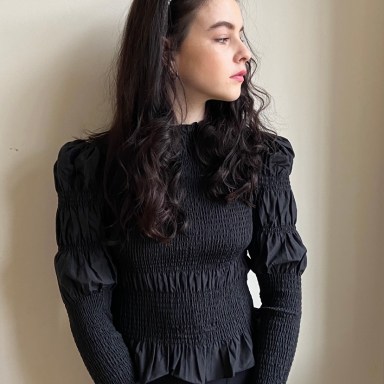 This summer, I will be 26. I will have been living with Ulcerative Colitis for eleven years, diagnosed for seven and with an ileostomy bag for five.

My late teens and early twenties have largely been dominated by difficult and life threatening health issues relating to IBD — not easy for a young woman to manage both mentally and physically.

Ulcerative Colitis, or UC, is an inflammatory bowel disease that causes ulcers in the large intestine (colon) and rectum. In my case, the disease was severe at the point of diagnosis and when all medications failed, I became dangerously ill and had to have an ileostomy. An ileostomy is formed during an operation involving the ileum, the point at which the small intestine and large connect. When the colon is removed, the ileum is diverted to an opening in the abdomen, allowing waste to be collected into an exterior bag.

At the age of fifteen, I had been approached and signed by a modeling agency. I loved everything about the creative process, the styling, lighting, photography, hair and makeup and of course the fashion. As an aspiring art student, I felt very confident in this environment and it concentrated my desire to work in the fashion industry. However, it wasn’t long before UC started to take its toll, although I wasn’t aware of the cause of my emerging health problems at the time because all my symptoms were misdiagnosed.

Much of IBD is hidden to the outside world — the numerous trips to the toilet were attributed to nerves, my fatigue was just “overdoing it.” But my continuing weight loss became evident at fittings. My complexion became much paler with dark, hollow rings around my eyes and my hair lost its body and eventually began to fall out.

What had begun with so much excitement, enjoyment and promise, had to stop as I became increasingly unwell.

I persevered though school and college, then without taking a break, on to university. During this time, despite many setbacks, I was determined to not to let UC dictate my life. I pushed on with my degree and the important “year out” in industry. Only four months after major abdominal surgeries, I took a flight to Rhodes, Greece to work with designer Kula Tsurdiu in her bridal atelier. In the magic of her studio, she allowed me space to breathe and my physical and mental healing began.

As I specialised in multimedia textile design and embellishment for fashion I enjoyed the atelier, full of excitement and sparkle. I was back in a world I loved and understood, surrounded by like-minded people. I continued my “year out” in London, working in different fashion houses. Although the pace of life was challenging, I found the design and application of embellishment so satisfying and helpful to my mental wellbeing… but it was still a lot to cope with.

When heading into surgery, I had been concerned that I would have to change my sense of style and the way I dressed to accommodate the ostomy bag. I felt sure my ileostomy would change my identity and UC would once again impact the way I felt about myself and others would see me. However, much to my delight, I didn’t have to change my wardrobe, I soon worked out that all I needed to feel comfortable was a good pair of high waisted jeans and high waisted tight underwear beneath dresses for everything to be hidden. The problem was that as a young woman, there was nothing appealing to me in wearing unfashionable, high waisted underwear! Having scoured social media for products, role models and advice, I couldn’t find anything much relatable.

With my former modelling experience, I reached out to a young designer called Jasmine Stacey in London who was promoting evocative lingerie for ostomates. I offered to model for her and she arranged a shoot for her Valentine’s collection. It was the first time I had put myself out there again and this time in lingerie. It forced me to face my demons and insecurities. My confidence grew with the success of the promotion.

Soon afterwards, BBC3 made contact with Jasmine to film a clip of us for their Amazing Humans series. The video was released in June 2017 and has over 13 million views on Facebook alone. I was amazed by the positivity it generated and the messages we received from women and men worldwide, both giving support and asking for advice. In setting myself free from my own fears and insecurities around the perception of others negativity, I regained my self-confidence and now look to help others like me to do the same via my Instagram account.

For me, physical illness and mental health is a perpetual circle, inextricably entwined. I choose to embrace and promote it by wearing clothes that make me feel confident and considered, in order to present the very best version of myself. Mindfulness plays a big part in my daily life because without dedicating time to it, the pressures of managing a chronic illness can become too much.

Ultimately, I decided to make a career from what makes me happy, creating beautiful hair accessories for bridal and occasion wear. Intricately weaving beads demands concentration and I am completely absorbed and in the moment. It gives me the opportunity to control my anxiety and has a restorative power, promoting a sense of wellbeing and achievement.

I find that being confident and at ease with myself, helps to make people around me feel the same. I hope that with the increased awareness of IBD and stoma bags, the negative connotations often associated with them will be replaced with a better understanding and empathy for suffers.

At the end of the day, we are all just trying to live our best lives.

Lydia is a 25 year old accessories designer from Nottingham, England. In the past 7 years she has been diagnosed with ...

This Is Why I HATE The ‘Body Positive’ Movement

I’m Ready To Tell The Truth About My Interviews With Graham Welsh, The Man Found Innocent After 20 Years On Death Row