This actually happened years ago, before they installed suicide barriers at the viaduct, but I can still remember it as clearly as if it had happened yesterday. Every single word I said to him, and he to me. It’s branded in my mind as a constant, sharp reminder: be careful who you let in. Funny thing is, I thought I was being a good guy. I’m not even the kind of person to go out of my way to help others, but when I found Mason standing on the parapet of the Prince Edward Viaduct, I felt compelled to say something.

His face was stark white, as cold-looking as the Toronto weather. I remember his lips shaking as he held onto the concrete behind him. I’ve never even known someone who had committed suicide before, but I could tell he wanted to. I could see it in the mesmerized way he looked down the hundreds of feet that would swallow him whole. So I stepped out, and I spoke as softly as I could:

“Mason,” he said, still staring down into the empty space below.

“I don’t know you, Mason,” I said as gently as I could. “I’m not even from Canada, but I can tell that maybe you’re having a rough time.”

That got me a look, but only fleeting enough for me to realize that he was sneering at me. He looked like he was in his mid-20s. Not poorly dressed, but not too expensively either. He wasn’t homeless, or at least it didn’t seem like it.

“Edward,” I said, ignoring his frustration. “My name is Edward, and I can see you have a lot on your mind. Maybe you want to tell me a little of what that might be?”

I was at a loss for words. It felt so sudden and harsh… yet so familiar for some reason. Why was that story so familiar? 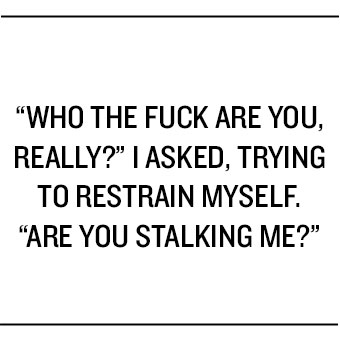 “Did you ask her?” he quickly replied.

The wind suddenly picked up, bringing with it a few snowflakes. The first of the year. As it whipped around us, Mason lost his balance a little and I instinctively reached out to grab hold of his jacket. Even there, inches from the edge and slipping, he still didn’t seem scared.

“I’m also taking a pay decrease,” he said, ignoring my question. “The manufacturing plant I’m working at is threatening to close up and outsource to Mexico if the union doesn’t agree to take a 20% pay decrease. I’m pretty much the only guy there who is saying that we should take the decrease rather than lose our jobs.”

There it was, another familiarity. Only this time, I knew exactly why it was so familiar. Everything he was saying, all of his troubles were my troubles.

“Who the fuck are you, really?” I asked, trying to restrain myself. “Are you stalking me?”

“You came here and talked to me, Edward,” he snapped back. “Why are you getting so upset?”

“Everything you’re talking about has happened to me! That’s my life you’re complaining about.”

“That’s strange,” his eyes were cold, and if he was getting any amusement from this, he betrayed none of it. “Coincidence, I guess. It is funny though…”

“That I’m standing here, looking down into the end of my future. And you’re there, acting like everything is okay.”

“It…” the words caught dry in my throat, like a wadded up napkin. “It is going to be okay. I don’t know for sure…”

“You know goddamn well that that smell on your wife is from another man. You can tell every fucking time you press yourself against her unwilling lips that they have already been satisfied by someone else’s.”

I stood there, not knowing what else to say. Was this some elaborate game he was playing with me? I am from Florida, here visiting some distant relatives and suddenly I run into a man who claims to have the same problems as me. Was that even possible?

“Look at the color of my hair, Edward,” he said, shaking the few rogue snowflakes out of it. “It’s brown, as brown as mud, just like the color of my wife’s hair. But do you know what color my youngest son’s hair is? Fucking blonde.”

“There could be all kinds of reasons…”

“Wake the fuck up, Edward!” he reached over the concrete divider and knocked on my head with his knuckles. Suddenly he was more engaged with me than the end of his life lying beneath his feet. “Wake up to what’s going on around you. You are not 12-years-old anymore, you coward. You cannot just bury your head in your fantasies and pretend like your parents aren’t fighting anymore.”

“My parents. What do they have to do with this?”

“It’s how you’ve always dealt with your problems, ever since you were little.”

Now when I think back to it, I should have realized that the conversation shifted completely to focus on me. But at the time I was too shocked by the reality of everything he was shoving in my face. It was so sudden.

“Where are your wife and kids right now, anyways?”

“Caroline had to stay behind to take care of…”

“If we don’t take the pay decrease, we’ll lose our jobs,” I said, desperately. It was all closing in on me, like a wall of ice. All of it was right there, restricting my throat, filling my head with an insufferable white noise. And over it all, I no longer saw Mason as a stranger. It was look I was looking in a mirror. “They’ll move it all to Mexico.”

“What do the other guys call you, Edward?”

“Spit it out!” He shouted, inches from my face. I hadn’t even noticed at the time but he had somehow wound up on the other side of the divider, right next to me. How did I not even notice? “Spit it out you coward.”

“That’s what they call me. They say I’m a coward.”

Suddenly I could hear all the guys from the union around me, berating me and telling me to leave the men to the negotiations. All the while my boss, Keith, would look at me with this silent pity, like he was trying to apologize and ridicule me at the same time.

Mason opened his mouth to speak to me, but the voice that carried his words belonged to someone else. It was Keith’s voice that he spoke with, “Just kill yourself and leave your wife to me. No one wants you at the plant anyways.” 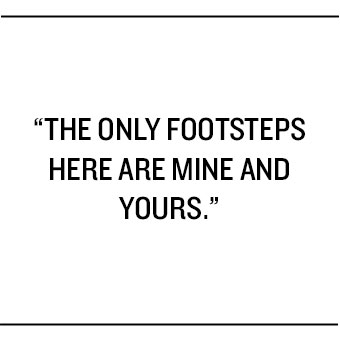 And something broke inside of me. Something came lose and I felt the icy wind on my face, blowing up over the parapet. I looked down and saw a light at the end of a very long, dark tunnel. I saw a warmth that I never realized had escaped me so long ago. I felt the snow melting on my skin and I felt myself tipping.

But before I could fall, I felt a hand reach out and grab me by the collar. I twisted to find her looking at me with these big, emotional eyes. She looked like she was going to cry.

“You don’t walk on the Prince Edward Viaduct,” she said, with a hint of French in her accent. “You don’t ever walk here.”

I turned suddenly to see where Mason was, but he was gone.

“There was another man here! He…”

“No,” she said, in that soft, feathery voice of hers. She pointed at the ground, where the snow was falling. “The only footsteps here are mine and yours.”

I looked down. She was right. All of the hairs stood up on my arms as I stepped back over the concrete divider, onto the walkway. I glanced back to the sheer drop that would have carried me to my death, and I cried. I cried harder than I ever have in my life. I cried because I could no longer pretend like all of those things I had been avoiding weren’t true.

The woman took my arm and walked me back to the street where she hailed me a cab. I couldn’t bring myself to tell anyone. Not my relatives nor my wife. When I got off the plane, Caroline was waiting there with our kids. One with brown hair, the other with blonde. And when she came in for a hug she smelled normal.

But sometimes I come home and she smells like another man. Sometimes I still hear Keith looking at me in that pitying kind of way, and I remember Mason. I can see him shaking his head at me like I was a disappointment. I can hear him whispering to me:

“You didn’t even have the balls to end it.”