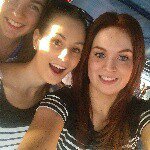 Even though deep down you know you deserve better. But maybe you need the self-validation that you’re not so easily forgettable and you’re worth fighting for. That the hours you spent talking in the beginning before one of you fell asleep meant more to them than just an easy hook-up. That they wouldn’t have cuddled you during the night or kissed you on the forehead before they left in the morning if they didn’t have some sort of feelings for you. But you begin to realize all you were ever destined to be was the girl that they could have fun with. Someone they were more than happy to jump into bed with but would never think twice about starting anything more serious with. You thought you could win them over. If you acted like you didn’t care or were the chill girl they wanted you to be, they’d realize what a catch you really were and make you theirs. But their texts became less and less frequent until you were hanging on to a pointless Snapchat every now and then or a drunken Saturday night booty call. Until like every guy before them, they eventually disappear completely, and it isn’t until you meet someone new that the memory of them fades, and the cycle repeats itself.

It’s no secret that modern day dating sucks. I’m exhausted of filtering out the fuckboys and watching conversations inevitably die on the endless circle of dating apps. I’m sick of worrying about how to craft the perfect response when someone asks me what I’m looking for, so I don’t seem like a desperate psycho, yet I want to let them know that I’m more than just a one-night stand. I feel deflated when boys don’t respond to my opening message on Bumble, yet I’m over creeps asking me if I am some version of DTF on Tinder. I’m tired of occupying myself by texting other boys to distract myself from the fact that the one I really like hasn’t messaged me in a few days. And when I do finally swallow my pride and message him first, I have to act like I’m okay with things being casual by burying my feelings and pretending that’s what I want too. But the more time that passes, all that ends up happening is that I feel more lonely and disappointed than ever.

I’ve never been in love. I’ve never even been in a relationship. And with my 25th birthday rapidly approaching, it seems like some giant curse that can never be lifted. I dreaded when boys I previously dated (if you could even call it that) asked me the inevitable question about my previous relationship history. Did I lie and make up some flaky story about some mysterious character I dated in the past or did I look him straight in the eyes and tell him the truth – that I’ve been single my entire life. And why should being single be something to be ashamed of anyway? Why should we be embarrassed that we’ve had the chance to spend our years selfishly, working out who we are as individuals and learning how to love ourselves first. Being single should not be confined to the checkbox we tick while filling out a form at the doctor’s office or the anxious feeling we get when we receive a wedding invitation knowing we have no plus one to bring. Single is about being able to hit the town, drink a little too much and hook up with that cute boy just because we feel like it. It’s about being able to take six months off work and travel just because we want to explore the world. It’s about being able to move across the country and take that dream job without having to think about how it affects anyone else. Single is freedom, self-care, and independence all at the same time.

So, the next time someone asks why you’re single, wear it like a badge of honor. I’m not saying being single is the easiest thing in the world, but it is definitely not the worst thing either. And while you’ve never been in love, you’ve never let those moments of loneliness take over to the extent where you’ve settled for something less than magical. Dating is hard, and at times it may seem like the end is never in sight. The most important thing is to realize that with every shitty boy that doesn’t see your worth, or for every time you frustratingly delete all your dating apps and swear off the male species forever that eventually someone will come along to pick up the pieces. And although I can’t guarantee that the next boy you meet won’t screw you over, like all the countless ones have before, we just have to hope and pray that one day we’ll meet someone that will leave us uninstalling Tinder for the very last time.

Hey! I'm Lucy and I am currently studying a bachelor of journalism at University. I enjoy writing, sport, and ...