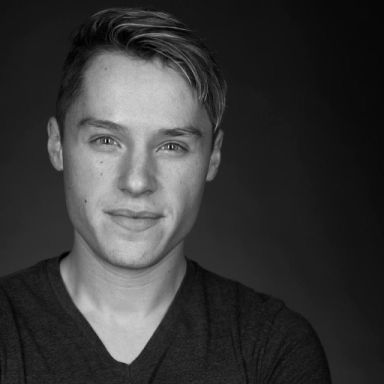 The first time I attempted to make love after my husband left me, I had a panic attack.

Naked, in a stranger’s bed, I began to hyperventilate. I had met a really attractive guy on Tinder—too young to date, but maybe just right to bang some self-esteem back into me. I’ll never know if it was cruel timing or divine intervention that I found myself single for the first time in 10 years with an injury to my backside (use your imagination) that would cause me to be completely unable to have sex for 8 months, at the same time as having broken a front tooth that would take months to heal before it could be replaced by a crown. At a time when it would have been fucking splendid to run around seeking validation by riding every hot guy in West Hollywood, my body felt completely out of order. My soul was doing almost as well. There’s nothing like actual damage to your sexual parts to make you feel like “damaged goods” during a divorce.

Still, I needed this. My ex was probably boinking the ballet dancer he left me for about 20 times a day. It had only been a few months since I’d had sex, but it felt like years since I’d done it with someone who actually wanted to do it with me. Mortified, I explained to Too Young Tinder Dude that we could hook up, but my butt was out of order. That was fine with him. There was plenty we could do that didn’t require use of my butt!

Humiliated, I explained, “But there’s more. I’m currently missing a front tooth.” I told him how I’d had an implant procedure but I still had to wear a fake removable tooth for several months. Interestingly, this wasn’t the first time I’d had such a procedure. Years earlier, while amid the same process, I was in a gay bar in Palm Springs with my mom when I sneezed and the fake tooth I was wearing flew out of my mouth and landed on the floor on the other side of the bar. No one but mom saw me glide across the bar like a gazelle as I snatched that thing up, thank God. That was fine for a laugh, but now? It’s bad enough I have to explain why I’m taking my damn tooth out every time I want to have dinner or a glass of wine with a guy, but it would be quite another ordeal altogether to have it pop out while I’m trying to look hot giving some dude a blow job.

Can you imagine? I already feel like a bag of dirt that my husband left by the side of the road for his goddamn teenage dream and I can’t even give a guy head without my tooth popping out of my fucking face! SHIT.

Well, Too Young Tinder Dude was sweet and willing to take his chances with my hillbilly smile and my broken butt, but I think he got more than he bargained for with my broken heart. If confidence is sexy, I was anything but. I think I managed to get through the small talk without crying into my cabernet (fuck, red wine, must remove tooth) and I probably only mentioned my ex or the homewrecker a zillion times before we made it to his bedroom.

Like every guy when we think we’re going to get laid, I wore my favorite pair of underwear. It didn’t matter though, nor did it matter that I was in the greatest shape of my life (knowing that you’re competing with a young twink for your husband’s heart will do that). Still, it was like a sad tug-of-war for him to get those Diesel briefs off of me. It was the kind of cat-and-mouse game that would have been sexy was I not so terrified of being naked in front of this hot young man. I suppose it was going alright, even when he pointed out that I’d missed a spot just below my tailbone while shaving my crack (I no longer had my husband as a spotter for that kind of thing).

I managed to enjoy him just a little before the part of me that wanted to be intimate with him and the part of me that desperately wanted to hide myself from him met in the kind of collision that causes a warm front and a cold front to create a tornado. I began to shake as I realized that you cannot make love without the main ingredient: love. It had been months since I’d made love, and only time would tell how long it would be before I’d be able to do it again with the same magic and intensity only a soul connection can create. The same magic I assumed—I knew—was not lacking in my husband’s life the way it was in mine. I lie there naked, flaccid, and devastated, knowing I had a mountain of healing to do.

I desperately craved connection and intimacy, but I was terrified of having it with someone unfamiliar. I decided I at least needed to wait until my mouth and ass were back in working order before I could feel sexy. Once my tooth was fixed, I could start giving out blow jobs like they were one of Oprah’s Favorite Things, but until then, I would hang out in Tinder purgatory to try and queue up a list of sexy men to hit up once I was healed. I must have scared away dozens of guys with my stalling.

“Yes! Absolutely, I’ll go to dinner with you. I’m… I’m… busy for the next seven weeks, but can we keep in touch until then?”

I probably scared away just as many matches with the kinds of questions you only think to ask after a decade-long relationship goes to hell and fucks you up inside. “Hi. Yes, you’re very cute too. What are your unhealed childhood wounds and traumas? Please list your addictions in order of severity. How do you feel about men with gray hair? Do you identify as a dangerous narcissist?” I learned how to speak “Tinder.” For example, “Please be sane” in a bio is Tinder-speak for “I haven’t figured out that I’m the one with the problem.”

Those were dark, dark months, but I mentioned earlier that it may have been divine intervention. Maybe eight long months of sleeping alone, no one to hold me when I cried, was exactly what I needed. At 2 a.m. on a Saturday night, I was alone, but I knew he wasn’t. I knew exactly where he was and what they were doing. The vision of it haunted my mind like that godawful Simply Having A Wonderful Christmas Time song that gets stuck in there and makes you want to bash your face in with a ball-peen hammer. So I’d meditate. At two in the morning. I’d listen to speeches on the law of attraction and lectures about spirituality. I blasted hypnosis tapes in my ears. I did anything I could to drown out the darkness.

Those months of digging into my soul and calling upon every ounce of strength I had to make it through the night caused my greatest pain to become the source of my greatest healing—healing far more than just the wound caused by my home getting wrecked by a couple of inconsiderate pricks. I couldn’t numb the pain with men or sex. I was forced to be my own parent. I had to nurture and cradle myself in my own arms until I found peace. Dare I risk sounding namby-pamby by saying it caused me to fall deeply in love with myself for the first time in my life, and for that I’d suffer 10 more broken hearts?

I still have hard days, but I’m doing so much better. I even made a practice out of helping people like me heal from painful breakups. My new chompers are shiny as fuck and my colorectal surgeon says he’ll have me looking 17 again in no time. He says I’ve got real star potential! I’m ready for a new start with new energy, so I’m moving to Austin, Texas in a few weeks. I haven’t yet found love outside of my newfound love for myself, but I’m ready to be ready for it. In the meantime, I intend to find me some sexy cowboys and save a lot of horses.

I help people heal from divorce and traumatic breakups.