In the beginning, God created man, but seeing him so feeble, He gave him the cat.
—Warren Eckstein

There is something about the presence of a cat…that seems to take the bite out of being alone.
—Louis J. Camuti

The idea of calm exists in a sitting cat.
—Jules Renard

God made the cat to give man the pleasure of stroking a tiger.
—Joseph Méry

As every cat owner knows, nobody owns a cat.
—Ellen Perry Berkeley

If cats could write history, their history would be mostly about cats.
—Eugen Weber

If a cat spoke, it would say things like ‘Hey, I don’t see the problem here.’
—Roy Blount, Jr.

If cats could talk, they wouldn’t.
—Nan Porter

If there were to be a universal sound depicting peace, I would surely vote for the purr.
—Barbara L. Diamond

In ancient times cats were worshipped as gods; they have not forgotten this.
—Terry Pratchett

A cat is only technically an animal, being divine.
—Robert Lynd

No matter how much cats fight, there always seem to be plenty of kittens.
—Abraham Lincoln

The purity of a person’s heart can be quickly measured by how they regard cats.
—Anonymous

If you are worthy of its affection, a cat will be your friend, but never your slave.
—Theophile Gautier

One must love a cat on its own terms.
—Paul Gray

One cat just leads to another.
—Ernest Hemingway

Every life should have nine cats.
—Anonymous

It is impossible to keep a straight face in the presence of one or more kittens.
—Cynthia E. Varnado

Cats were put into the world to disprove the dogma that all things were created to serve man.
—Paul Gray

There are two means of refuge from the miseries of life: music and cats.
—Albert Schweitzer

Who hath a better friend than a cat?
—William Hardwin

The great charm of cats is their rampant egotism, their devil-may-care attitude toward responsibility, their disinclination to earn an honest dollar.
—Robertson Davies

Essentially, you do not so much teach your cat as bribe him.
—Lynn Hollyn

Who among us hasn’t envied a cat’s ability to ignore the cares of daily life and to relax completely?
—Karen Brademeyer

Cats have it all—admiration, an endless sleep, and company only when they want it.
—Rod McKuen

The cat is the only animal which accepts the comforts but rejects the bondage of domesticity.
—Georges Louis Leclerc de Buffon

It doesn’t do to be sentimental about cats; the best ones don’t respect you for it.
—Susan Howatch

A cat is a puzzle for which there is no solution.
—Hazel Nicholson

When a cat chooses to be friendly, it’s a big deal, because a cat is picky.
—Mike Deupree

If you yell at a cat, you’re the one who is making a fool of yourself.
—Unknown

If I die before my cat, I want a little of my ashes put in his food so I can live inside him.
—Drew Barrymore

There is, incidentally, no way of talking about cats that enables one to come off as a sane person.
—Dan Greenberg

Cats know how to obtain food without labor, shelter without confinement, and love without penalties.
—Walter Lionel George

A kitten is the most irresistible comedian in the world. Its wide-open eyes gleam with wonder and mirth. It darts madly at nothing at all, and then, as though suddenly checked in the pursuit, prances sideways on its hind legs with ridiculous agility and zeal.
—Agnes Repplier

It is easy to understand why the rabble dislike cats. A cat is beautiful; it suggests ideas of luxury cleanliness, voluptuous pleasures.
—Charles Baudelaire

The cat is such a perfect symbol of beauty and superiority that it seems scarcely possible for any true aesthete and civilized cynic to do other than worship it.
—H. P. Lovecraft

Who would believe such pleasure from a wee ball o’ fur?
—Irish Saying

A cat never discusses his business with humans, not even Princesses. A cat never explains and never apologizes. A cat never alibis. You must accept a cat as it is and for what it is and not expect more than the pleasure of its company.
—Terry Brooks

Those who’ll play with cats must expect to be scratched.
—Miguel de Cervantes

Most humans know better than to cross a wizard. A cat does not care.
—F. T. McKinstry

You cannot look at a sleeping cat and feel tense.
—Jane Pauley

When my cats aren’t happy, I’m not happy. Not because I care about their mood but because I know they’re just sitting there thinking up ways to get even.
—Percy Bysshe Shelley

People that don’t like cats haven’t met the right one yet.
—Deborah A. Edwards

Just watching my cats can make me happy.
—Paula Cole

Cats conspire to keep us at arm’s length.
—Frank Perkins 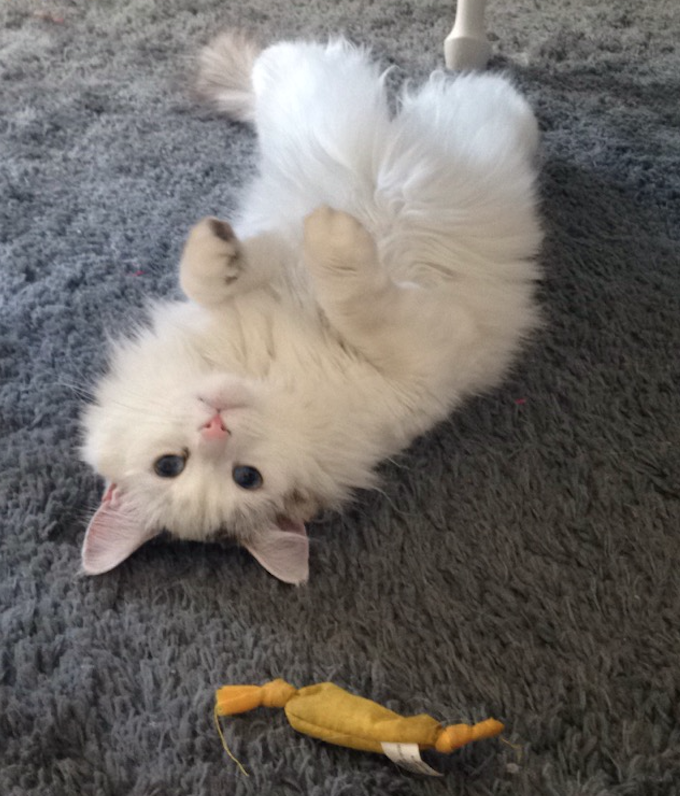 Indeed, there is nothing on this earth more peaceful than a sleeping, purring cat.
—Jonathon Scott Payne

I believe cats to be spirits come to earth. A cat, I am sure, could walk on a cloud without coming through.
—Jules Verne

A cat isn’t fussy—just so long as you remember he likes his milk in the shallow, rose-patterned saucer and his fish on the blue plate. From which he will take it, and eat it off the floor.
—Arthur Bridges

Like a graceful vase, a cat, even when motionless, seems to flow.
—George F. Will

People that hate cats will come back as mice in their next life.
—Faith Resnick

Cat hate reflects an ugly, stupid, loutish, bigoted spirit. There can be no compromise with this Ugly Spirit.
—William S. Burroughs

The cat is domestic only as far as suits its own ends.
—Saki

Some people say that cats are sneaky, evil, and cruel. True, and they have many other fine qualities as well.
—Missy Dizick

My cat speaks sign language with her tail.
—Robert A. Stern

The city of cats and the city of men exist one inside the other, but they are not the same city.
—Italo Calvino

You will always be lucky if you know how to make friends with strange cats.
—Proverb

Cats come and go without ever leaving.
—Martha Curtis

I love cats because I enjoy my home; and little by little, they become its visible soul.
—Jean Cocteau

The cat seldom interferes with other people’s rights. His intelligence keeps him from doing many of the fool things that complicate life.
—Carl Van Vechten

I wish I could write as mysterious as a cat.
—Edgar Allan Poe

When a cat flatters…he is not insincere: you may safely take it for real kindness.
—Walter Savage Landor

Cats are rather delicate creatures and they are subject to a good many different ailments, but I have never heard of one who suffered from insomnia.
—Joseph Wood Krutch

Human beings are drawn to cats because they are all we are not—self-contained, elegant in everything they do, relaxed, assured, glad of company, yet still possessing secret lives.
—Pam Brown

Cats don’t like change without their consent.
—Roger Caras

I had been told that the training procedure with cats was difficult. It’s not. Mine had me trained in two days.
—Bill Dana

Cats seem to go on the principle that it never does any harm to ask for what you want.
—Joseph Wood Krutch

I have lived with several Zen masters—all of them cats.
—Eckhart Tolle

Five cats and a woman. That is all I need in life.
—Alejandro Jodorowsky

I have studied many philosophers and many cats. The wisdom of cats is infinitely superior.
—Hippolyte Taine

Cats can work out mathematically the exact place to sit that will cause most inconvenience.
—Pam Brown

A cat pours his body on the floor like water.
—William Lyon Phelps

There’s no need for a piece of sculpture in a home that has a cat.
—Wesley Bates

Time spent with a cat is never wasted.
—Colette

The cat is the only animal without visible means of support who still manages to find a living in the city.
—Carl van Vechten

I read that when cats are cuddling and kneading you, and you think it’s cute, they’re really just checking your vitals for weak spots.
—Kandyse McClure

The smallest feline is a masterpiece.
—Leonardo da Vinci

If there is one spot of sun spilling onto the floor, a cat will find it and soak it up.
—J. A. McIntosh

Kittens are born with their eyes shut. They open them in about six days, take a look around, then close them again for the better part of their lives.
—Stephen Baker

When I play with my cat, who knows if I am not a pastime to her more than she is to me?
—Michel de Montaigne

People say the Internet’s made of cats. The reason isn’t because of cats; it’s because people like to have an emotion where they say ‘aww’ all at the same time.
—Jonah Peretti

A cat is an example of sophistication minus civilization.
—Author Unknown

The human race can be roughly divided into two categories: ailurophiles and ailurophobes—cat lovers and the underprivileged.
—David Taylor

The reason cats climb is so that they can look down on almost every other animal—it’s also the reason they hate birds.
—K. C. Buffington

A cat can be trusted to purr when she is pleased, which is more than can be said for human beings.
—William Ralph Inge

After scolding one’s cat one looks into its face and is seized by the ugly suspicion that it understood every word. And has filed it for reference.
—Charlotte Gray

Kind old ladies assure us that cats are often the best judges of character. A cat will always go to a good man, they say.
—Virginia Woolf

The cat could very well be man’s best friend but would never stoop to admitting it.
—Doug Larson

All cat stories start with this statement: My mother, who was the first cat, told me this…
—Shirley Jackson

There are few things in life more heartwarming than to be welcomed by a cat.
—Tay Hohoff

The 100 All-Time Greatest Quotes About Forgiveness

The 100 Greatest Quotes About Spring