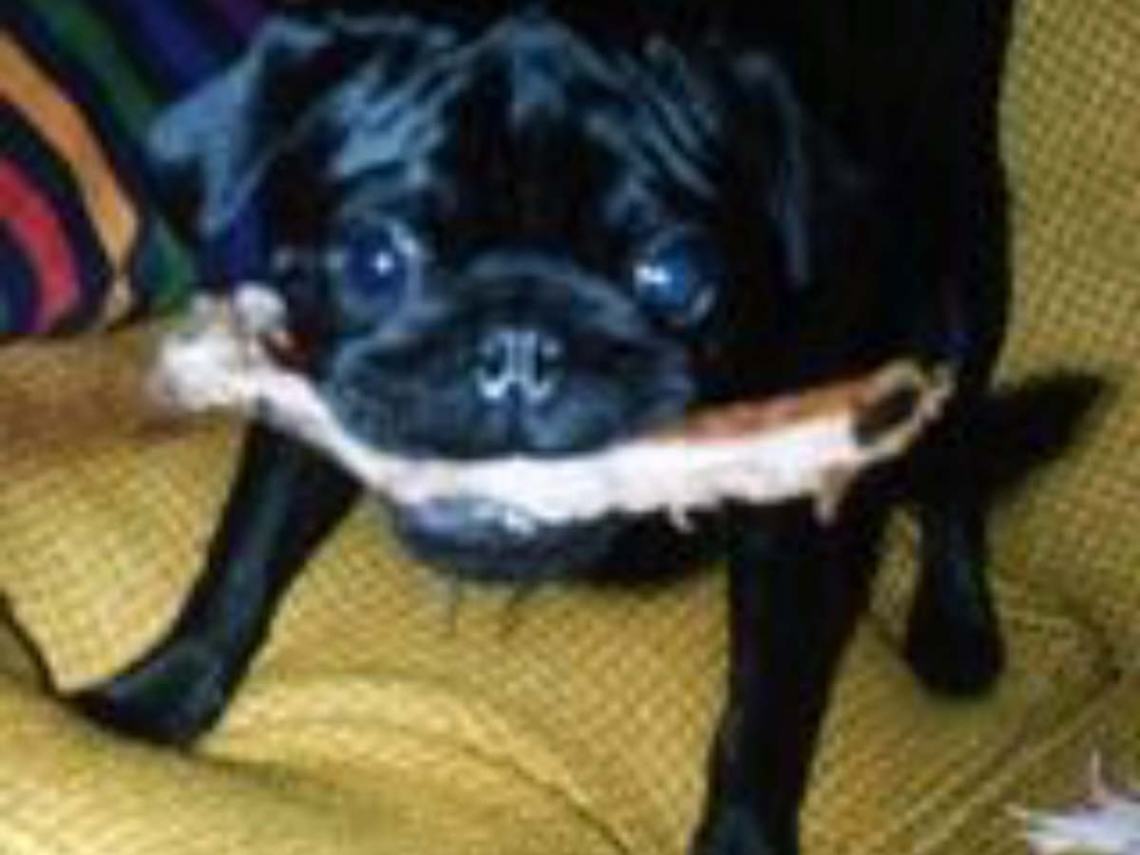 1. My cat constantly hits the power button on my PS4 when I’m playing games with my friends.

My cat constantly hits the power button on my PS4 when I’m playing games with my friends.

2. When my dog took a stick from a boy’s hand and pissed on it.

I was at the dog park with my female Jack Russell terrier. We were walking around and we came across this little boy puppy who had a stick.

He looked so happy and proud of his stick.

My dog walked up to him very calmly, and very methodically grabbed the stick gently, pulled it from his mouth, put it on the ground, turned around, pissed on it, and walked away.

3. My 16-pound fuckstick of a cat likes to shit on the floor right in front of the litter box twice a day.

My 16-pound fuckstick of a cat likes to shit on the floor right in front of the litter box twice a day.

4. My dog used to wake me up by sitting on my head.

I have 3 dogs, and when one of them was a puppy (full grown, but still considered a puppy for his age) he used to wake me up by sitting on my head.

5. When she farts in a room full of people and then leaves.

My dog has a habit of walking into the nearest occupied room, farting, and then leaving because she can’t stand her own gas.

6. When my dog took a MASSIVE shit on the family beach towel.

Casually walking my dog on the beach, normal day… leash gets snug… I look back and my dog is bent over on a family’s towel (mind you they’re sitting there with kids) taking a MASSIVE shit. So my first instinct is pull my dog away and the shit is half way out of his ass so he’s like “Fine.” Stops again and kicks sand back at the family. MY dog is a dick.

7. When my bunny speed-humped a stuffed animal, jizzed all over it, and ripped its head off.

I have a rabbit named Commander Bun Bun. I recently moved, so I was unpacking my things. I made the mistake of leaving him out of his cage while I unpacked the stuff for my bedroom. I have a stuffed cat that I’ve had since I was a kid. It’s a little beat up, but it’s very sentimental.

I took out the stuffed cat from the box, and set him on the floor while I put a blanket away in the closet. Apparently Bun decided that the stuffed cat was extremely sexy. He mounted it, speed humped it for 10 seconds, jizzed all over it, and ripped its head off. I was between laughing and crying for hours.

8. When I realized that one of my hamsters was a cold-blooded murderer.

One day I woke up, and saw the scene: one of them was stuck between the running wheel and the cage floor, flat crushed, while the other was running on it.

9. When my cat spilled an entire glass of water onto my sleeping friend.

10. When my cat would look me in the eye and purposely tip over a glass filled with water.

Benji used to stick his paw in my water glass, give me the meanest look his cute little face could muster and then tip the fucking thing over. I miss that cat every single day.

11. When my cat shit and pissed on my dad after he rescued it from a tree.

My cat decided to climb up a 50ft tree only to then realize it couldn’t get down. Fire brigade got called, ladders were set up and my dad tried to get him down. Coco then unleashed an unrelenting stream of shit and piss onto my dad as he was climbing the ladder to get him down.

It was nature at its finest.

12. When my cat drags a single claw over my eyelid to wake me up.

On the few days I get to sleep in, if my cat decides his breakfast is too late he has learned to wake me up for it.

early on, I apparently learned to sleep through his MRROOOOOOOWs by the bedside; as time went by, I learned to roll over & ignore him when he’d bat at me with his paws…

…so he’s learned to get me up the one way I can’t sleep through: he’ll take a single claw & drag it very gently over my eyelid. it doesn’t hurt at all, but I’m hard-pressed to think of a more peculiar feeling.

13. When my cat purposely zaps me with static electricity.

I have a Maine Coon cat, and as such he’s incredibly fluffy. Well, this little giggleshit figured out that if he rolls around on his back, that he gets static electricity buildup. And, he also figured out that his cat-dad (me) does not enjoy being shocked.

So, naturally, he does it whenever he thinks I’m not paying enough attention to him. Asshole.

My Siberian husky has this stuffed animal that he looooves. He’s real protective of it. One morning I’m laying down and he comes up to me with his toy, he drops it on my chest… Realizes I have it then proceeds to bite me for being in possession of his precious toy…that he gave me. He’s an asshole but I love him to death.

And no, he didn’t bite hard.

15. She just freaking abandoned her new little puppies because she’s a dick.

We got our dog from the dog warden (they just catch them, hold them for a bit, if no one claims them then they have a week to be adopted or they get put down. Shelters often take them to stop that happening. Anyway, they don’t have any info about the dogs, and you can’t even see them out of the cage until you agree to take one..) so anyway, my mam picks this crappy little terrier thing, she’s really needy and follows my mam everywhere. But then it turns out she’s actually pregnant so we get puppies, yay! We rehome 3 and keep 2. Then when they’re a few weeks old we let them start going out and about outdoors. One evening the mother and 2 puppies go off and hours later Penny (the mother) comes back, without the puppies. She just freaking abandoned her new little puppies because she’s a dick. Eventually the puppies turned up and were okay, but I swear she tried to Hansel and Gretel those pups.

My dog likes to sleep in bed with me. But he likes to sleep sideways. Across the middle of the bed. And he doesn’t like to be moved. And if you try to move him, he becomes dead weight and starts sighing at you like you’re inconveniencing him. Whatever, Buddy. Fuck you.

I had friends over and my dog felt ignored. She walked up to me and bit my leg. I was wearing jeans and it broke skin. She wanted some attention.

18. When my Golden Retriever ate three of my little brother’s chocolate birthday cakes.

Golden Retriever. It’s bullshit that dogs die when they eat chocolate. Helped my mom make three chocolate cakes for my little brother’s birthday, and that fucker ate all three when we weren’t looking.

19. When he kept stealing a mentally handicapped girl’s food at a barbecue.

When he targeted the mentally handicapped girl at a bbq and just KEPT stealing her food. He didn’t go for anyone else’s… and she didn’t know what to do so she didn’t move or anything. Just sat there looking really sad until someone came and rescued her and replaced her food each time. Little dick.

20. Turns out he’s such a spoiled dick he didn’t like the food he was stealing, he just liked to steal to be a dick.

We have 2 dogs in our house, a Great Dane (roommates dog) and a Tibetan mastiff (my dog). We feed them separately, but my dog will always attempt to eat my roommate’s dogs’ food. I figured I would go ahead and buy him the same food for him.

After a week of mixing, I finally gave him a bowl of pure new food. He didn’t eat for a week while that was in his bowl.

Turns out he’s such a spoiled dick he didn’t like the food he was stealing, he just liked to steal to be a dick.

21. He will drink from other dogs’ water bowls, then tip it over so they can’t have any.

My dog learned a dick move from a big old hound at the dog park.

He was about 9 months old and a really happy nice dog. He met the epitome of the “grumpy old man” dog at the park. It was empty in the dog park and hot outside. We were playing ball and in comes a guy with an older very tall hound dog. The old dog walked around and growled when my mid sized dog got near him even snapped a couple times. I had a water bowl by my bench that I brought and offered some water to the old hound. He decided he would have “two chickens”. The hound drank his fill of water, looked right at my dog waiting to get a drink, took his paw and while making eye contact dumped the remaining water out of the bowl onto the ground. He was done and felt that my dog could go fuck himself and dumped it out. It wasn’t even his water, but hey, I’m the hound.

Now my dog does the same damn thing. Go to the dog park and he will run over to a water bowl, his or not, drink it and then dump the rest out even if other dogs are waiting to drink.