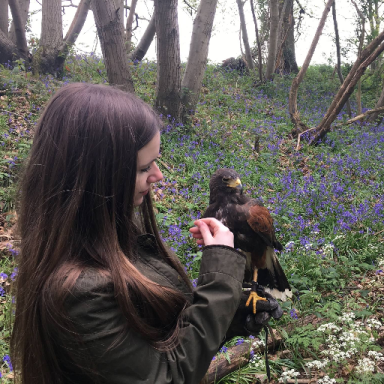 My least favorite time of year is quickly approaching. It isn’t tax season – although that is certainly a contender. It isn’t the cold and slushy months ahead or the Hallmark-induced headache that can be Valentine’s day or that odd expanse of time between New Year’s and spring.

Rather, it is my annual gynecologist visit.

To be sure, visits to the gynecologist are not something anyone looks forward to – I have yet to meet someone who gets excited at the thought of a PAP smear. And yes, they are in fact something that makes many grit their teeth and cringe when anticipating them. However, to a trauma survivor, these visits can be more than an inconvenience or a discomfort. They can be painful, and they can be scary. They can cause flashbacks, and they can make us relive our trauma. They can even retraumatize us.

I remember my first gynecologist visit vividly. I put it off until I was 23, and for a long time swore I would never go. I finally gave in when my irregular and painful periods had me desperate for a birth control prescription. At the time, I knew I was scared of doctors and medical settings.

Intellectually, I knew it was because of childhood trauma. However, I was still years away from remembering the details of my trauma, and even farther away from taking steps to address it. I hadn’t had a proper physical in a decade, let alone undressed and donned one of those ridiculous paper gowns. I had no way of anticipating the post-traumatic stress response I was going to have when the doctor touched my bare skin for the first time complete with crying, screaming, fuzzy-edged flashbacks, and the grand finale – passing out. What was worse was that I had no way of explaining it. I had blocked out so much of my trauma by then that I remembered almost none of it. I couldn’t explain – to myself or to her – why her hands on my belly felt the way nails on a chalkboard sound. Why I was physically unable to remove my hands from my breasts and keep them away long enough to allow her to perform a breast exam. Why the simple act of lying there felt so deeply and utterly wrong and my whole body and brain were screaming at me to get up and run. I thought I was being unreasonable. I thought I was being dramatic. And for years I continued both dreading these visits and berating myself for doing so, wanting so much to just be “normal.”

I felt like less of a woman for not being able to tolerate gynecological exams because we have been socialized to see them as a normal part of life for those of us with female reproductive systems. The women in my life reacted with nothing less than shock when I told them that, at 23 years old, I had never had a PAP smear. When I expressed fear and discomfort surrounding the annual visits after I did start going, they brushed it off. No doubt they were doing this in a well-intentioned but misguided attempt to allay my fears. It seems to be a natural human tendency to downplay the negativity of an experience when we know it is a necessary one, rather than acknowledge its negative aspects and attempt to help someone find constructive coping mechanisms.

As children, when we are scared to get a shot our parents tell us not to cry, it doesn’t hurt that much. When we are scared to get a cavity filled, we are told not to cry, it will be over before we know it. And as adults, when we express fear or discomfort with the idea of lying naked on a table while someone inserts instruments into our body and removes a tiny bit of us with them, our friends and family members tell us it’s no big deal – it’s normal, it’s natural, it’s typical. The rest of us do it – why can’t you?

I will never forget the day I stumbled upon a TV show called Embarrassing Bodies. There was a segment in which a male physician, in an effort to promote women’s health, was at a shopping mall with a camera crew stopping passing women to ask them when they last had a PAP smear. Most were visibly embarrassed at the public confrontation, but he seemed oblivious to their discomfort. If their answer was any longer than three years, he tried to convince them to leave with the filming crew to have one right then at an unfamiliar clinic chosen by the show. I watched in disbelief as, upon assembling a group, he made his way with these women to the clinic and filmed them sitting in the waiting room, nervously awaiting their turns. Clearly, they had been avoiding the gynecologist for a reason – why did this doctor think that a dose of public pressure was what they needed to get them back in? Did he give any thought to the long-term psychological and emotional consequences of his social experiment for the women he was using to make a public point? The segment concluded with a shot of him in the clinic’s parking lot, saying how he was certain all of the women found the experience “a breeze.”

It was that final sentence that stopped me dead in my tracks. A breeze? Is that what it was supposed to be? Was there something wrong with me? Was I the only one that struggled? Was I…bad at being a woman? And what gave someone who had never had – and never would have – one of these exams the right to pass that judgment?

Looking back, I wish I could tell my younger self that no – you aren’t bad at being a woman. You aren’t “crazy.” You aren’t “dramatic,” or “sensitive,” or “weird.” There is nothing wrong with you.

You are a trauma survivor. You are a trauma survivor whose body and brain are working overtime to protect you from reliving past trauma and experiencing new trauma. Your body is tensing up to defend you from an invasion. Your brain is firing fear responses to keep you away from a situation it believes is a threat. In reality, your “extreme” reaction to what others are telling you is “normal” is completely reasonable. It is a survival mechanism.

As a society, we have normalized gynecological exams because we want people to get them. And this is not without good reason – they play a pivotal role in finding potentially devastating illnesses that if caught early enough are survivable. However, in an effort to protect from preventable diseases, our society – from our friends to our families to our media to our medical community – has forgotten about trauma survivors. Every time you call a pelvic exam a breeze, or shame a woman for not getting an annual exam, or gasp in disbelief when you hear a woman has been avoiding her doctor, you are inadvertently calling into question her very identity. You are othering her – placing into a bucket of “odd” or “non-compliant” misfits who can’t get through a “normal” experience without behaving in a “childish” or “dramatic” way. In a sense you are shaming her, implying her behavior is somehow undesirable or unacceptable.

Your intentions aren’t bad. You aren’t trying to shame anyone, or treat them with any sort of malice. Because of the taboo nature of trauma, you probably don’t even know you are speaking with a trauma survivor. Most of us don’t tell our stories so easily, even to those closest to us. You are trying to offer reassurance and that is admirable. However, I humbly offer a suggestion of a better way to do so.

Instead of glossing over, validate. Validate your friend or family member’s feelings. If you are a physician dealing with a patient reluctant to see you and even more reluctant to actually allow an exam, do the same. Stop telling us how easy it should be or normally is. Don’t compare us to yourselves or other people who power through pelvic exams like they are nothing. Don’t act shocked at our reactions or demand to know whether something has happened to us to make us react so badly – we may not be ready to disclose that to you. Whatever you do, do not show anger or frustration. Don’t roll your eyes and scoff. We have as little control over our reactions to fear and pain as you do, and worrying about satisfying you only heightens our anxiety. It also tells us you aren’t a safe person to confide in, leaving us even more isolated precisely when we need supportive and safe connections.

Just once, I wish someone had said to me, “I understand,” or “That sounds difficult,” or “How can I help?” I wish someone had created a safe space for me to confide in them if I wanted to, without putting any pressure on me to make disclosures I wasn’t ready to or capable of making yet.

If I could say anything to fellow trauma survivors currently struggling with utilizing reproductive healthcare, I want you to know the following. There is nothing wrong with you, or weird about you. You are not “difficult” or “non-compliant.” You have a body and a mind that are trying fiercely to protect you, and that is something to be celebrated rather than maligned or made fun of. If and when you decide you are ready to talk to someone, I hope you find a safe place to land – be that a friend, a relative, or a therapist. And more than anything, I hope you hear this – your story and your feelings are valid.

To everyone else, I would say this – stop normalizing gynecological exams. Yes, they are needed. Yes, they can be lifesaving. Yes, it is important for women to both have access to them and to regularly utilize that access, and I understand both the individual and societal impulse to encourage that by downplaying their uncomfortable or difficult aspects. But the fact is, portraying these examinations as normal, natural, or painless not only erases the experiences of so many people with female reproductive systems, but also risks causing trauma.

Instead, we need to speak openly and honestly about all aspects of these examinations – the good, the difficult, and everything in between. We need to be adequately preparing people for the physical and emotional sensations they may experience when they access their first exam so that they are not left questioning why their reaction is different from the one they were told they were “supposed” to have. And we need to support people with female reproductive systems who struggle to access reproductive healthcare out of fear or discomfort, be it emotional or physical. Instead of normalizing the exams, we need to normalize the feelings that they trigger – the entire spectrum of them. You may be afraid that doing so will cause fewer individuals to access gynecological care.

As a trauma survivor, I think the opposite. I think that an open, honest, and robust dialogue sensitive to the diverse array of experiences and perspectives individuals bring into an exam room will empower more individuals to access care. I think they – we – will draw strength from knowing there are others like them out there, and I think that healthcare providers will grow more sensitive to the range of emotional needs their patients bring and create safer and more supportive spaces for them. This is nothing short of a human rights and public health issue, and it is imperative we start making space for trauma survivors in the discourse.

Absolutely convinced I was a witch in a past life