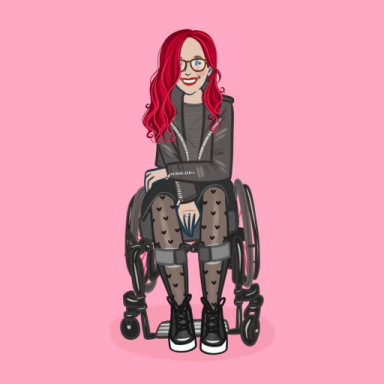 This is a very personal story about the past, present and future of my body. I’m sharing it because people that I’m not close with often ask me why I don’t have children yet, and I need those people to understand why that question can be hard for me, and many other women, to hear.

I’m twenty-eight years old and I have lupus.

Because of my age and the fact that I’m in a committed relationship, I’m in prime baby-making territory, so it’s easy for people to look at at me and immediately wonder when I’ll start popping them out. The thing is, lupus can make it really hard to have children. Your risk of miscarriage goes way up, and the list of complications that can arise out of labor are uncomfortably long. Once upon a time I really wanted to have kids. They were going to be named Amelia, Charlotte (Charlie for short), and Simon. Simon was going to be the oldest because I really wanted my daughters to have an older brother, and apparently I’m some sort of wizard that can control the sex of my future offspring.

Just a few years ago my ideal future looked like marriage, kids, a dog, a two-story house with stairs (because I was going to have working legs that could go up and down the stairs on a regular basis), an SUV, and an executive Costco membership.

But the sicker I got the blurrier that picture started looking in my brain. My energy levels dropped so much and my napping desires grew so big that I would get exhausted just thinking about having a baby. The thought of growing a human being inside of me and then having to chase that human being around for 18 years so it didn’t fall and hurt itself seemed like the most tiring thing in the world.

And then, at twenty-six years old, I got diagnosed with lupus. The first thing my specialist said to me after “you have lupus” was “do you want children?” I nervously said, “I don’t know, why?” She told me that it can be really tricky and that I would need to meet with a gynecologist who would monitor me closely. She didn’t say it was impossible.

Since then I’ve met people with lupus who have had children no problem. I’ve also met people with lupus who struggled during pregnancy and labor but who bounced back, now have healthy children, and don’t regret a thing. Lupus is so unique that you never really know which path you will be taken down with the disease, and the same goes for pregnancy. It’s like a kinder surprise; each chocolate egg is wrapped in the same colored foil with the same brand name on top, but some people get really cool toys when they open it up and other people get those lame stickers. So it’s like a kinder surprise but with more tragedy, I guess.

I went home from the hospital after receiving my diagnosis and googled lupus and pregnancy. I closed my laptop after reading one or two (or twenty-five) websites, sat back and thought “well, fuck.” Pregnancy and motherhood might not be impossible but it began to seem impossible for me. I cried (I mean the all-out snotty kind of crying) to my boyfriend and he was very comforting about the whole thing. He didn’t really want children to begin with. I mean, I definitely mentioned to him in passing that my image for our future was that two-story house with all those youngsters running around, but we had never seriously discussed it because it was still relatively early in our relationship.

I guess I was just planning on sneaking the kids into his life at some point down the road and hoping he didn’t notice. So when I told him that it would be hard for me to have children it wasn’t a big adjustment for him to make. I think his ideal image of our future involved the two of us playing a lot of Halo and going on vacations in between the Halo tournaments.

Thanks to my already present crushing fatigue and my inability to lift things heavier than a dessert plate for almost a decade, having to stop picturing myself with kids wasn’t as big an adjustment for me as it would have been if my illness came out of nowhere. The prior decade of sickness meant I had a head start distancing myself from that image of my future babies. The official diagnosis just meant that it was time to stop toying with the idea too.

It had been awhile since I sat around the house daydreaming of baby Blundstone boots and onesies with poop emojis on the bum, so that was mostly easy for me. I was starting to really enjoy the quiet peacefulness of just my boyfriend and I. I have no intentions of ever playing Halo, but the rest of his ideas for our future seemed nice. So I just started practicing the words “I don’t want children” out loud instead of just in my head and it felt okay, it felt right.

But being told by a doctor that it would be complicated trying to carry a baby to term still managed to feel like a round-house kick to the heart.

It made it feel like it wasn’t my choice, and I don’t particularly love it when I’m not the one in charge of my reproductive organs and whether or not babies will grow inside of them. I am thinking about getting the sterilization procedure done to significantly lower my chances of getting pregnant because birth control makes me too sick. That’s a tough decision to make but I think it makes sense for me, and it also gives me back some of the control over my own body and what it can and can’t do.

I know there are people out there with chronic illnesses who are sick and who do their absolute best to give their children a wonderful life. I bow down to those people. They are special, strong people. I just don’t think I’m one of them.

Maybe if we both wanted kids more than we wanted anything in the world we would see every doctor imaginable and we would do everything in our power to give birth to a healthy baby. But at the end of the day, being diagnosed with a disease that makes it hard to have children is certainly a great test to see if you really want to be parents. So we opted out of that route. I didn’t want it bad enough to risk my life for it. We both know that there will always be a void there for me. I can’t really say for sure just yet how big that void will be. It’s not an easy thing to judge. I think most of the void will be filled by the deep love that my boyfriend and I have for each other. But just in case there’s still a tiny void there, I hope to fill the leftover bits with a mini wiener dog that wears sweater vests.

Too many times I begin to reach this peaceful place of acceptance just in time for someone I barely know to run into me at Starbucks, or at the grocery store, and ask me that awful, horrible, invasive question: “when are you going to have kids?”

But that’s such an overused analogy that I will find a different one. That question is like a bear sneaking up on you in the wilderness when you’re just minding your own business, trying to Instagram the cute mason jar picnic lunch you packed. Sometimes the bear comes up to you and starts sniffing around but you’re able to play dead and eventually it goes away to terrorize another group of lifestyle bloggers.

But sometimes it’s the bear from The Revenant, you are suddenly Leonardo DiCaprio, and after the attack you’re just left holding your insides in your hand and wondering how you’ll survive. I’m lucky when the kid question just leaves me with a bad taste in my mouth for the person who asked it. But there are some occasions when I am completely blind-sided by it because it tears open my old wounds and I start obsessing again over all the things that have changed since my lupus diagnosis. And I can’t predict when that will happen for me.

It blows my mind that someone who hardly knows me thinks it is okay to interrupt my serene afternoon sipping on pumpkin spice lattes to ask why I haven’t pushed an 8 pound human out of my vagina and started saving for it’s college education yet.

I want to scream, but I don’t. Instead I usually whisper something like “I don’t think I’m having kids,” or “oh I don’t know,” while looking everywhere except in their eyes. And believe me, there are times that I hate myself for that. I do know why I’m not having kids. And I do know that it’s a very complicated part of my life that is really none of their business. I always think of a million sharp things to respond with, but not until five minutes later when they are out of my line of sight and the shock has worn off a bit.

I really wish I could look those people in the eye and tell them the heavy, heavy truth. I want them to stand there in a stupor while I explain to them in extensive detail that I’m probably not having kids because I have a disease that makes it really high-risk and I might become too sick someday to take care of them. I want to spew it all out at them and watch their awkward reaction. I know they don’t deserve to know any of those details about my life. I have no obligation to explain my illness to anyone I don’t want to. But sometimes I just want these people to feel as uncomfortable with my answer as I am with the question. I never go through with it, of course. I’m too nervous of the awkwardness that would follow.

So if you’re someone who is known to ask women why they don’t have kids please just stop. You may think it’s a harmless question, and to some women it certainly can be, but that’s not always the case. If you don’t know a person well enough to already have the answer to that question, chances are you haven’t earned the right to that information. It isn’t yours. You quite literally could be ruining someone’s day or week or month by asking that.

Don’t make me tell you in aisle five of the grocery store that I’m not having kids. Don’t make me stand there next to the hot dog buns feeling numb after seeing that look flicker across your face, the one that makes me feel less than, the one that says my womanhood should be tied to motherhood. Don’t be the bear from The Revenant.

Just go home, take a nap and then think about the catastrophe you almost caused in someone’s life when all they wanted was to pick up some poppy seed bagels and cream cheese for breakfast.

I'm a disabled woman who writes about life with a disability.