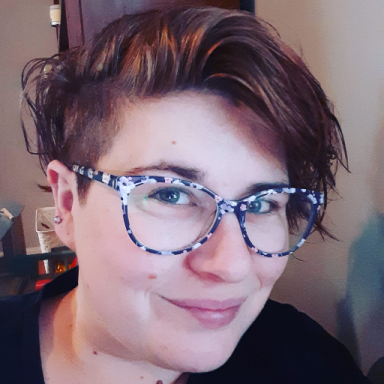 I loved reading romance books as a teenager. For the first few weeks of high school, I checked out a new one from the library every few days. They were tame teenage ones—the most risqué would involve a lingering kiss followed by a swift interruption by another character. Saved, just in time.

As they say, time heals all wounds, and we became friends, then lovers, then friends again, and this was the course of our lives for several years.

Why couldn’t we just commit to one another?

My parents didn’t like him; he didn’t think I was his type. Several times he would go to some leadership retreat or get some position and then decide I wasn’t quite on his level.

I solved the problem by moving far away. Now I wasn’t just a small town girl, and suddenly I became girlfriend material. Had I known that would happen, I probably would have moved away years ago.

Then he complicated things. He moved to be with me in the city. We didn’t click.

I could kiss this man for hours but I couldn’t speak to him for more than three minutes without feeling infuriated. On the surface, we voted the same way. We liked the same things. We both liked fashion. The undercurrent said otherwise: The problems are too big. They won’t go away.

You live and you learn.

In those romance novels, I used to love that there was usually another girl who would steal the hero away from the heroine. My hero was happy to be stolen, and frankly, I was almost happy for him to be taken from me.

We tried being friends but it never quite worked. Every time we would reconnect, we would fall a little in love with one another again. We would read the same books, pursue the same social media platforms, be interested in the same things. We would talk all of the time and then it would start. That nagging. Sometimes it was quiet: Why the hell am I thinking about him all of the time? He has a girlfriend! Sometimes it was loud: We can’t be friends because you’re getting married and I don’t know how to deal with that.

When we lived together once upon a time, my first love had rearranged my entire studio flat. I had completed a 1,000-piece jigsaw and he decided to move it using a complicated method of mats and wooden boards, but he never put it back quite right. Some of the pieces went missing. They’d turn up when I least expected them to years afterwards. I found pieces in boxes, in the bottom of wardrobes, several in a suitcase. Even during those times we weren’t speaking, the pieces reminded me he is here all of the time, even when I least expect it. I could turn off our song when I heard it on the radio or throw out all of his notes he gave me, but as for this jigsaw, well, it would be with me wherever I was.

First love is sometimes the one who got away.

In my case though, he was the one who got away and came back. One day we start speaking again and everything seems to fall into place. We see each other. It is on. We say all of the things we didn’t say when we were teenagers and silly young adults who just didn’t know any better. Things like I was scared and I was too and you were too intense and who the hell rearranges someone else’s house for them without permission.

I want this to be where the story ends because this is the nice part. In that third instalment of the Bridget Jones films, Renee Zellweger says the immortal line: Sometimes you love someone because it feels like home. Because being with my first love is exactly that. Being at home is like being wrapped up in a slightly itchy blanket, or staying too long in front of the television binge watching shows, or (and Bridget would approve) making cheese-flavored snacks for the one you love. By this stage, the pieces of the jigsaw puzzle had stopped turning up. It didn’t matter. I could practically read his mind or set my watch by the predictability of his arrival home from work.

Something in me broke.

It wasn’t anything in particular. It was a lot of little things. Things that couldn’t be fixed. Or they could be and something else would come up and the problem would be bigger and bigger.

I once owned a little sports car. It was cute. I had personalised licence plates put on it. But sometimes it was a nightmare. It would pick up the tiniest of nails, resulting in a new tire every few months. It was made out of plastic. In most cars, I could slowly bump into something and it would leave a dent; in this car, I could just touch the curb and the bumper would fall off. My first love and I were a romance novel, a jigsaw, and now a cheap-and-cheerful coupe.

We were doomed to fail from the beginning.

First love isn’t ever really over.

When I think of the other men I’ve loved, I remember the good times and the reasons we broke up very clearly. But my first love isn’t ever really over. It’s in the music I sing with my children. It’s that brief moment I almost breathe his name when things go wrong, as if I’m channelling his presence to guide me through the situation. It’s in that tearful confessional I made months ago where I rattled off all of the things I said to him I didn’t mean, and how terrible I felt about being so unkind.

It’s okay, my mother had said, for whatever reason deciding that she liked both of us (not just me) at this point. When we’re hurting, we all say things we don’t mean.

The books I read taught me that love is big and extravagant and always easy when you find The One. I think they were a lie: Love is small, turns up when you least expect it, and is complicated beyond words. It isn’t ever really over, because the conversation isn’t. There are at least 10 possible scenarios I play in my mind of whatever our next conversation will be and all of them involve me sauntering off like I’m Julia Roberts in Pretty Woman after announcing the shop attendants had made a big mistake. I can even picture the hat.

The romance novels got one thing right, though. Love can’t just be contained in one book. That’s why there’s millions of romance stories. Every single one of them has the same beginning and ending, it’s what happens in between that first kiss and the final page that matters the most.

I'm a procrasti-writer, a romance reader and chronic mess maker.

I’ve Never Stayed In Contact With An Ex, But Here’s Why I’m Trying To This Time

Anxiety And Being In Love