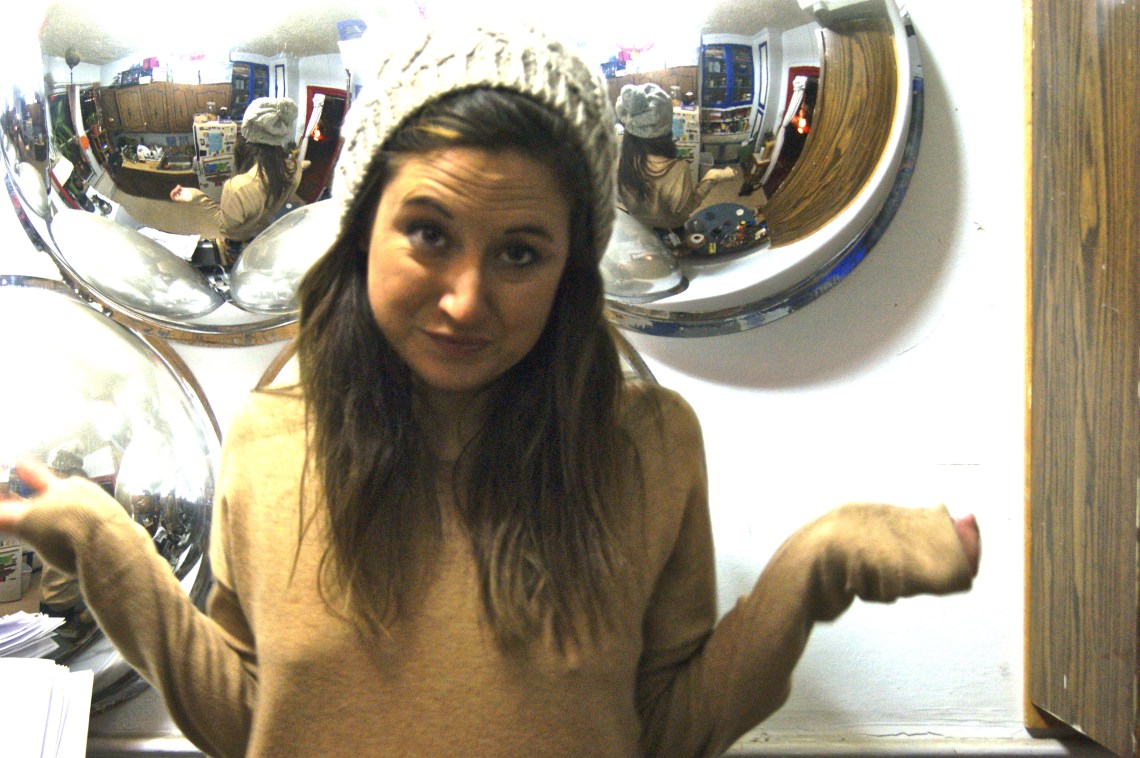 Actually, that’s a lie. Despite going over the rehab “list of essentials” with your mother (which laughably do not include shaving kits and mouth wash–apparently in the case that you try to drink yourself to death), you have forgotten to bring a clock.

So no. It’s not your alarm. Your roommate’s alarm, however, is going off and you are nestled in your twin-sized bed under the hideous Floral Comforter attempting to wield yourself into the first nonsexual human pretzel ever performed.

Maybe the nurses will forget, you hope. Sometimes they do.  You move the comforter up over your head so that when one of them comes knocking for vitals, maybe she’ll mistaken your lump of a frame for a pillow. (And yes, you do think of that scene in Ferris Bueller’s Day Off… Every.Time.)

Your roommate wrestles from one side to the other– flinging her matching comforter to the left.  She turns off the alarm.

Ugh, you think every morning. Why can’t she roll around for 30 minutes like a normal person.

But she doesn’t. You already know she won’t.

She’s up now, her black hair flowing behind her–grey sweatpants pulled up over her waist and Easter-colored top hanging from her chest.

You can hear her take the brush off her nightstand– her hair untangling with every pull.

You like her, you remind yourself. You just want an excuse to not have to trudge down the hall to get your weight done.

You don’t even need weights anymore, you complain every morning to the other girls who have sleep in their eyes and medical gowns hanging off their shoulders.

You’ve weighed the same since you checked in (you know this because you’ve snuck glances at your sheet every time drill sergeant Betty has drifted her eyes from you to the cabinet. A fact you’re not sure if you should feel comforted by given the overhaul of carbs- or a fact you’re internally disappointed with.)

“This is your normal weight,” they always tell you– as you lay in your bed, running your hands over your side to see that your hips are still traceable.

To make sure you don’t feel softer from when you accidentally caught a glimpse of your backside in the mirror.

To run your fingers over the flab of skin beside your arm pit and your back bone and grip it like it might come off when you wriggle it.

This weight– you think again– laying in bed, pushing your hand under the waist of your sweatpants– between your legs. It’s an awkward thing to do– but you want to touch the skin that hangs on your inner leg– you need to hold that piece of thigh in your hand.

You don’t know why you do it– But you sift the skin between your fingers, feeling the loosening muscle, and the pockets of fat that you know store the cereal boxes you binged.

You can hear your roommate open her wardrobe– and grab the hospital gown that is sitting somewhere crumpled in your closet as well.

It’s cold, you think. It’s the Sunshine state and you’re always freezing in this place.

You wonder what you’ll wear on this day–

Fail to forget you haven’t showered in three.

8:30pm rolls around every night and when the other girls head off with their sponges and soap– you steal the inside of one of the phone booths and call your best friend off collect.

You’ll shower later, you tell yourself when the phone rings. You want to feel the water on your skin– and the shampoo down your spine.

You want to undress yourself and look down at your stomach- to your legs- to the tips of your toes where you need to trim the nail.

You want these things– and sometimes you do them.

You can look in the mirror and see what’s left of your ribs– blanketed with that thin layer of fat.

You can turn to the side and not hate the rounding shape that your figure makes.

Because you’re made that way, you can say to yourself.

You are not made to be a stick–

But this morning– with your body folded into you, you can see the indention of your sweatpants imprinted on your stomach, you can feel your thighs touch– your stomach sag– and your arms squished against the bed, spreading out like an egg cracking over a skillet–

And you’re sad because you can’t love it, and it hurts.

You hate yourself for hurting–

“Is it Tuesday?” You ask, pulling the comforter down to your nose.

Your roommate looks back at you from the hanging mirror on your door, tying her gown to the side of her.

“Are we doing body checks?”

“Yeah,” she says, sweeping her hair into a loose bun on the top of her head.

“Merry Christmas,” she sings– winking at you from the mirror.

“So what is it we’re doing tonight?” you ask later that morning, plopping down next to Lilly on the community couch.

“I dunno,” she says, her tangled headphones lying loosely in her ears.

“JJ,” you say to the girl across the room. “What’s the deal with Christmas?”

She shrugs. “I think they’re still deciding on letting us stay up till 12.”

Lilly shakes her head, mumbling explicits. “23 years old,” she muses. “And can’t even stay up till midnight.”

“Tonight?” you say, making a face.

“Dude, are you going to be back on partial then?” Lilly wonders.

She shakes her head. “No. They know I’m eating; my body’s just not reacting yet.”

You and Lilly nod–slightly jealous but it goes without discussion.

The counselor walks in to start the group.

Christmas in Rehab you think as you take your place on the couch against the wall.

You reflect on the year before– where you were. Drunk, a bottle of wine in hand–fitted black tights– a sleeveless dress you bought from Urban that you didn’t wear a jacket with because you were excited to feel thin enough to wear it.

You were in England– mate.

You were in England, thin, sloppy–you barely ate dinner before but throughout the night snuck the appetizers at the party by hiding them in your purse.

You were losing it then– carefully, concretely.

And now here you are, you muse later that evening, climbing into the Rehab-escort Bus behind the other eating disorder patients who drink to forget they’re hungry.

When you get there, you’re welcomed by people that offer you nonalcoholic eggnog and coffee– You look to your counselor for approval but she says “No.”

“It says on my sheet you chose to have coffee at dinner.”

She just shakes her head. ”Sit down, Hall.”

And you do. You sit in a room with 30 people you’ve never met and together, you spend the next hour trying to understand what it is that you’ve done in your life.

Why you’ve done it.

You talk about what your life was before– the Christmas’ you spent avoiding the food, drunk off 3 glasses of red wine.

You think about your mom, your dad–

How they’re flying halfway across the world right now to sit in an eating disorder rehab with you for two visitor hours on Christmas.

You realize somewhere throughout this hour that you’re feeling guilty– but not in the way you imagined.

Feeling guilty because you’re guilt-free to be sober tonight– and in a meeting.

Guilt-free because you’re comforted by being safe.

You share this with the room towards the end– you don’t know why but you feel like you should.

To have just said it– to have admitted the truth just once.

When the meeting’s over, you form a circle with the people beside you–clasp hands with a guy named Steve who came, he said, because if he didn’t– he’d drink.

On the other side, you have Lilly– she shared her story tonight and you smile at her softly as you take hold of one of her dirty, self-tattooed fingers.

You get back to your little self-proclaimed loony bin–make a pallet on the floor of the recreational room, with your girls.

You say they’re your girls now– because despite knowing them for 2 weeks– you’ve been more honest with them than you can remember being with anyone.

Why wouldn’t you, though. You had to.

So you make a conscious decision to celebrate Christmas tonight– instead of shun it.

You bring your pillows from out of your rooms, your blanket that your moms sent you– the stuffed animals that friends sent in a care package– and together the lot of you make a casket on the ground.

A white, wrinkled, sloppy pallet on the floor– and you’re in the middle now between Lilly and her XL Wu Tang Clan sweatshirt, and a 14-year old with a pixie haircut who lost her Dad nestled into your shoulder on the other.

You look at these girls that night–at their bodies, and their faces.

At the way one of them tucks pink hair behind one ear.

At the oddities of a human–

You realize you may never be in a room with these people again after this.

May never see their stories grow when you leave– or spend another holiday watching “A Christmas Story.”

But damn, if you’re not lucky to have them then.

11:59 hits– and tonight, you guys bring in Christmas asleep on each other’s shoulders.