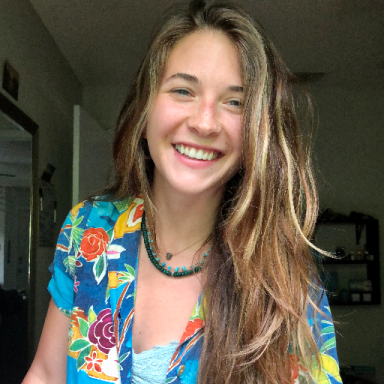 American citizens whisper, wonder, and wait. There is a clear divide amongst family, friends, neighbors, and strangers. Rather than allowing the world to ease to a halt while scientists research safe practices and educate the public about COVID-19, America sped forward into the belly of the beast, driven by the egotistical idea that this global pandemic is serious for some, but not themselves.

Nearly six months after the first case appeared in the US, we are more lost than ever, feeling the consequences of opening things back up too early. These choices have already claimed more lives, jobs, and inner and outer peace. Primarily White Americans feel entitled to creature comforts, active lives, and business-as-usual. It is not a mystery where this elitist attitude comes from; our history very clearly depicts the way White ancestors crawled, stomped and killed Black, Indigenous, and people of color to get to the place of White supremacy we see so clearly today.

Beyond the elitist attitude we see from American citizens and leaders, the political and media arena have jumped in to further divide the people, pull apart our ability to deduce information and truth rationally, and make decisions for the betterment of the collective, not individual. America is a country which thrives on the idea of individualism, an every-man-for-himself attitude. This is one of our huge downfalls, and the reason we are leading in numbers of COVID-19 cases.

The wave of stimulus checks we saw, along with business stimulus loans and higher wages for the unemployed, pacified people (primarily Republicans) briefly. People said, “Trump is taking care of our economy.” However, even these actions will have dire consequences for our economy and sense of welfare. As the government shells out more and more money, we can be guaranteed of a total economic shutdown following Trump’s removal from office. If Democratic nominee Joe Biden takes office, we can also be sure the Republican party will blame the Democratic party—blah, blah, blah.

Instead of uniting the American people with logic and science in the face of a pandemic, the current administration has done everything possible to further divide, confuse, and enrage the public. Neither political party is innocent. Each is laden in profits from disasters such as these. The more division they create, the higher someone’s ratings get, the more donations flood in. How long will it take for the majority of American people to despise the system that has torn its people apart? How long will it take American citizens to say, Not only do we not need police, we also do not need faulty leadership, limited choice in nominees, and a two-party system? When will America realize there are more just, more resourceful, wiser countries we can learn from?

We are not only watching the rise of COVID-19, we are watching the slow dismantling of a system we have let live for far too long. Lies are being revealed. Truth is being reexamined. We the People are not powerless in the face of turmoil. We the People hold all of the power if we are willing to fight back, if we are willing to reach out and take it away from the 1% at the top. These are the White people perpetuating a system of hate, racism, rape culture. Look beyond the pretty lips saying the pretty words and find the truth. We must dig deeper, and then even deeper.

I was asked if morality and freedom can both reign. I pondered for a moment. Pause here to do the same.

The grievances of the world stem from a lack of empathy, knowledge, understanding, and love. We absolutely must feel the pain we put BIPOC through for centuries, educate ourselves on the issues of the made-up world of America, and love our neighbors deeply. We must become courageous and brave enough to allow these things to be our driving force. We cannot get caught up in the hate. Hate is what America’s current political leaders want from us. We must communicate deeply and consistently with those who differ from us; we must unify ourselves in order to take the power back and birth true, just change.

Failure in this movement is not an option, it never has been. We the People deserve better than what we are being offered (YOU, reader, deserve better than this bullshit). I hope we can all begin to understand and act accordingly. This does not mean we don’t head to the polls (or mail-in) this year. Rather, we must elect the official who will do the least harm, and then continue to mount pressure for more, better options moving forward. The only way forward is the next right thing, and then the next, and the next. This movement has no beginning or end, although most of us White folks have only recently joined. The process of bettering the world we live in (really, saving this home we inhabit) will never be over. In fighting for justice, we are already winning. We mustn’t give up hope that in time the pressure from our voices and actions will amount to huge, beautiful change.

“You must be the change you wish to see in the world.” – Mahatma Ghandi

I have taught others how to fly, from my dream realm to theirs.