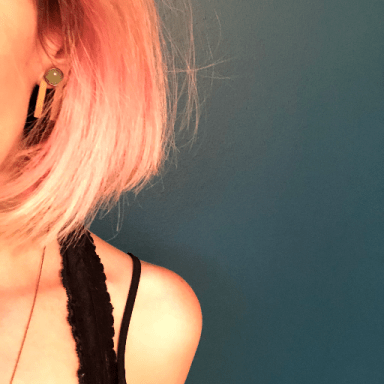 The first time I saw a person wearing a mask at the grocery store, I got scared. It was early March 2020, and the new coronavirus had just been declared a global threat by the World Health Organization. Yet mixed messages were flooding the media about what we should do. Healthcare workers were running out of PPE. And politicization of the virus had already begun.

I don’t know what it was that frightened me about seeing that stranger wearing a mask. Was he sick? Did they know something I didn’t? But that, combined with the empty grocery store shelves, drove my anxiety through the roof.

Now? Masks are coming off. There’s a vaccine (thank you, science). And things might return to normal. But I’m not ready.

I’ll miss mask-world. I will. I’ll miss that tiny, thin apparatus across my face that gave me a sense of control when the world fell apart. I’ll miss feeling anonymous. I’ll miss how I felt invisible. And tiny. And a little bit free.

I’ll miss having a visible reminder to stay at least six feet away from me at all times. I like my personal space. I don’t want strangers to touch me.

Oh, mask-world. Who else remembers how convenient it was to cry in public? What am I going to do now?

What about the strange faces I probably make now? How I nervously bite my lips? When I’m nervous, I tend to touch my face a lot.

I’m not looking forward to men telling me I look sad because THAT’S LITERALLY JUST WHAT MY FACE LOOKS LIKE. I don’t want people to tell me to smile. I don’t want to smell your breath.

I liked it better when people gave my nervous dog extra space. He appreciated not being approached.

And I liked not having to worry about seeing you again. Or accidentally running into someone I didn’t want to talk to. Sometimes I feel extra visible in public. It’s so invasive to bump into people I wasn’t expecting to see. Did you see me out and about? Are you sure?

I’ll miss being able to instantly tell whether or not a total stranger was capable of empathy for other human beings by their willingness to wear a mask in public. Because I really thought most people had empathy built in. But I’m secretly an optimist, and it always surprises me how selfish people can be.

And I’m not ready to forget.

I don’t want to pretend this whole thing didn’t happen. That half a million of us didn’t make it this far. And that, for an entire year, everything was so, so different. That people were scared. And that everything changed. And we all went through it. And it was a lot worse for some of us than others. And it forced a lot of unrest to boil to the surface.

Stepping into mask-world felt uncomfortable. Now I don’t want to come out. It feels just as uncomfortable as it did in the beginning. And yet, everyone around me seems to have moved on. Like it’s so easy. Can I just stay here a little longer?

I passed the Voight-Kampff test. At least they told me I did.