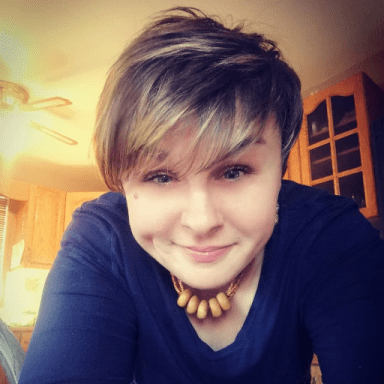 I want to write you a story, but I don’t know how to get it out of me and into you.

It’s too time-consuming and complicated to put into words. I have shit to do today. I can’t be expected to sit at this computer for hours to spin a story that perhaps 10 people will read. Life just doesn’t work that way.

Most days, I find deep satisfaction in writing silly, self-deprecating stories about my strange life and upbringing. The tiny moments which, in all likelihood, have brought me to this time and place. I like to write about how at 11 years old, I learned to bake sugar cookies in our double-wide trailer while a wood-burning stove burned hot in the background.

I reminisce upon my teenage years growing up in a small Canadian tourist town and all of the adolescent shenanigans I found myself in, hoping that my own children will be tamer in the years to come but knowing that this is only wishful thinking.

I’ve told many tales about life as a business owner. I’ve written a book on this, in fact, elaborating the details and focusing on the small truths to make them seem larger than life.

The thing is, I am not serious enough, smart enough, self-assured enough, or brave enough to talk about the social injustices I sometimes witness. Competency eludes me, as far as these adult issues go. I should stick to the easy stuff, the funny things.

I should, but I’m going to take a stab at this anyway.

We are working hard to build our small business, a bakery/sandwich shop. This means long hours, little money, and no health insurance benefits to speak of. When you are a small business owner and struggling to keep your source of revenue afloat, you have to hope for the best when it comes to the “extras”—in this particular case, dental luxuries.

However, Sophie, our daughter, has a cavity. I have no choice but to bring her in. Despite the obsessive brushing regiment I have her on, the cavity still comes. We haven’t yet got a family dentist in the city, as we are relatively new to the area, and as previously mentioned, dentistry is not in the current household budget.

I make an appointment with a dentist’s office near my home.

Upon arrival, the receptionist asks for my insurance information. I give her a shrug and tell her I do not have any. We will be paying out of pocket.

Of course, we could have swallowed the Blue Cross insurance, which is nearly $200/month and covers roughly 65-70% of the costs, but that did not seem reasonable to me when I looked into it. Obviously, as I stand here in the waiting room, anxiety-ridden and wondering how much this dental bill is going to cost, $200 a month doesn’t seem so bad. But that is hindsight for you, isn’t it?

Soph and I sit down, and strangely, the doctor comes to us.

There in the crowded little sitting are, where many other patients are awaiting their own checkups, the doctor tells Sophie to open up. He then proceeds to look into her mouth with his flashlight.

I feel awkward. This can’t be right. I’ve never had a dentist do this before. Sophie’s discomfiture is also growing. Although I’m sure she doesn’t understand why, she begins to squirm as the other people in the waiting area whisper amongst each other. The dentist tells me to control my child.

I’m sure you too, have heard those who loudly and proudly dismiss the need for social welfare programs because “those people just need to get off their lazy asses and work for their money like the rest of us.”

Typically, when this dialog comes up, I remove myself from the conversation.

It’s not worth arguing about, especially for me, a non-confrontational sort of person. However, like most people, I sometimes am given small bursts of bravery. Occasionally, I will, in a calm but shaky voice, remind them that I am one of those people.

I am one of the people who gladly looks forward to my monthly “baby bucks” federal deposit. I have put to use many government incentives and “handouts” when times have been tough. I vote left (most of the time) because I believe that social protections are essential for our society’s furtherance and well-being.

A government’s amendment to social policy for the wealthy can be exasperating. I get it.

However, these people will still own their cars, and homes, after having paid slightly more in their yearly taxes. For the comfortable middle class, the social welfare policy is more of a “why should my hard-earned dollars go towards them” issue.

But for those living paycheck to paycheck, a change to policy can be downright devastating. One month without this counted upon income can cause eviction and the inability to put food in their children’s mouths.

“This cavity is a bad one,” the dentist proclaims. “When was the last time you brought her in for a checkup?”

When I softly ask if we can move to an office or private waiting room, he tells me no. He says, “Answer my question.” And because I have this horrible nervousness when it comes to authority figures, I obey.

“Well, it’s been over a year. We’ve just started a new business, and money is a little tight—“ I stammer, feeling all of the eyes in the waiting room on me.

“That’s no excuse,” he says. “Don’t you understand what neglected dental health can do to a child? What kind of a mother are you?” I am not exaggerating when I tell you that these are his exact words. I feel so small. So inept as a caregiver. Completely useless, as the strangers in the room stare into their phones and magazines, pretending not to hear my scolding.

“Well, bring her back, I guess. We’ll have to get this fixed up. We don’t do payment plans here, so will you even be able to pay for the procedure?”

I want to tell you that I wasn’t crying.

That I was strong for my daughter, and I said to the old fuck to get stuffed and found a better, kindlier dentist’s office. I want to say that I didn’t allow his blatant spiel of classism to get to me and I overcame this situation. That I reported him and his practice. If only I could tell you that I was brave enough to stand up to this man who clearly believed he was superior to me.

Yes, now, today, my husband works at a corporate job where a good dental plan is included in the benefits package.

And we are so grateful and fortunate. But that shouldn’t matter. Back then, as I sat sobbing into my hands while an old man chided me for being a neglectful parent, I took it. I soaked in his words. They became gospel to me over time.

Because we were a low-income family, we were unsuccessful parents. We did not have the means to properly care for our kids.

We all seem to know what is best for society at large. When we hear of hard-knock cases that have had to move their families into shelters, or new countries for that matter, to escape poverty, war, natural disasters, danger, we say, “Well if that was me, I’d…”

The reality is that it isn’t us. Until it is.

And by that time, nobody cares about your opinion because your poverty has made you insubstantial.

When I get up the gumption to rebut, those who tell me that welfare earners should get off their butts and work with the “what about me” line, most of the time they say, “Well, not you, you guys have just had a bad run of luck.” With sheepishness dripping off of their tongues, they say, “Obviously YOU are hard workers. I mean the people who take advantage of the system.”

But isn’t it just a “bad run of luck” for almost everyone? Whether it be depression, mental health issues, job loss, a bad economy, family issues, or a dream that was never brought to fruition, there is always something that contributes to this bad run of luck.

“I don’t know why you are crying,” the dentist says as I quietly sob in the corner of the room while Sophie has her cavity filled. “You’re embarrassing yourself.”

I don’t respond. How could I? Who am I to rebut? Back against the wall, I have nowhere to go but cower.

We never went back to that dentist’s office—I’m sure you can imagine why.

We found a different place that did accept payment plans and, more importantly, understood. They helped me find social assistance programs to help with our dental costs until we got back on our feet. They uplifted rather than demeaned.

I cried in this new dental office too. Not out of shame or embarrassment, but because of these complete strangers willing—no, wanting—to help.

The spectrum of financial and social issues that face everyday people is vast and, to some, incomprehensible. We think that we know all of the answers to the genuine and very human problems that face our city, country, and world.

But the truest answer is to show your empathy and simply be kind.

Sometimes I feel that I am not serious enough or smart enough to speak about politics, social welfare, and the human condition.

And it is likely that I didn’t get all of the facts down and my article may very well be a little messy and too emotional. But I am starting to realize that the time to be brave is now. To speak up and tell not only the funny stories, but the important ones, too. Life can be lonely, it’s time that we share our stories and stop feeling so alone.