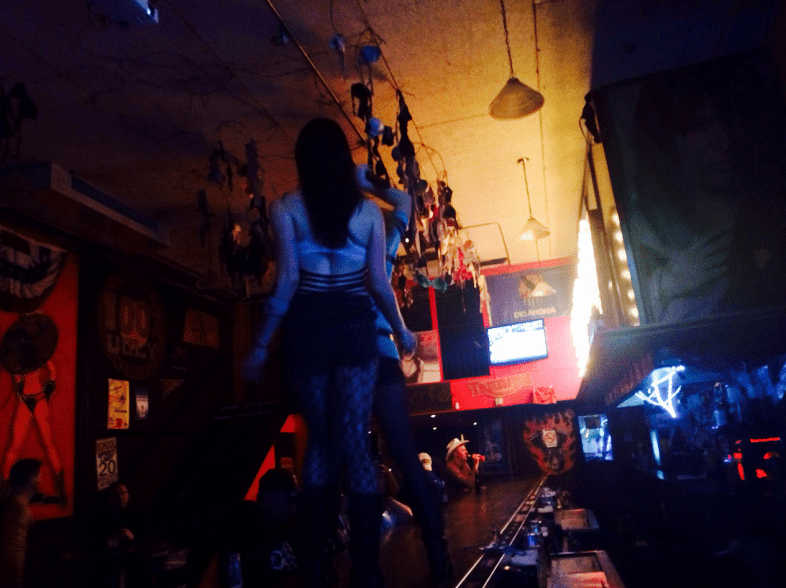 Call me whatever you want, but I’ve always had a bit of a fantasy for sex in seedy establishments. The kind with neon lights and paint chipped walls. Where dark figures loiter in dimly lit corners smoking cigarettes and watching on through heavy lidded eyes. I’ve fantasized many times about being taken into a room full of peep-holes and had someone fuck me while people watched, anonymously. I wanted filth; I wanted sleaze; I wanted the thrill of being fucked with fear and adrenaline pumping through my veins.

So when an opportunity presented its self, I took it with barely a second thought.

I’m lucky enough to have a friend called Jack, (and I’ll call him friend because I hate the term Fuck Buddy, or Play Partner) who happens to be on the same wave length as me when it comes to sex. He’s the type of guy who’s happy to fuck me in a dark back alley on a Tuesday night in the rain. Or who would come around to my apartment on his lunch break for a quick bondage session before heading back to a business meeting.

We’ve have good times, Jack and I.

“We have to do this.” He wrote, and I felt myself get instantly wet.

Jack’s the kind of guy who likes to take the lead, and I’ve always been happy to let him. In the bedroom he’s always the one dictating the scene, telling me what to do, setting all the rules. “If you’re unhappy about anything just squeeze my hand, OK?” he tells me, as he leads me down the street. I remind myself that I trust him. He’s a good guy and never makes me do anything I really don’t want to do.

He didn’t even hesitate when we found the entrance to the club. As we opened the door we were greeted by the owner assessing us through a hole in the wall. He quickly buzzed us in through a second set of doors where we were instantly hit with the stench of body odor and baby wipes.

As I put my umbrella and jacket in a locker, a chubby man standing at the top of the stairs told us that everyone here was “really lovely” and to “just be firm with them, no one’s going to do anything you don’t want, but they will want to join in if you let them.” Taking him as a member of staff, I nodded politely and reached for Jack’s hand, preparing to squeeze if the moment called for it.

Finally we found a cubicle at the end of the corridor reminiscent of a shanty bus shelter. The space was small with a wooden bench along the back. Black paint peeled off the walls while a green light illuminated our faces. I started laughing nervously and I felt myself grabbing onto Jack’s arm with both hands and not wanting to let go.

“I knew this was going to be seedy, but…” Jack said breathlessly.

“…Just not this seedy.” I finished for him.

“And the smell, what is that?”

“Fart and baby wipes.” I replied. “What should we do?”

I could only just make out his face in the green light and I realized for the first time, he looked completely out of his element.

“I think we should leave and go back to yours, I can’t see us fucking here.”

I could hear movement down the corridor. In my mind I saw the group of men we had passed waiting eagerly to make their move.
“I feel bad.” I said, thinking of the owner who greeted us as we came in. “we should at least stay for ten minutes or so, I don’t want people to think we’re running away.”

I placed my bag down on the bench beside us as Jack leant in to kiss me. His lips were warm against my cold skin and his fingers trailed up my leg, under my leather skirt. I pulled him closer to me, pressing his body hard against my own. It had been weeks since we’d last seen each other, and months since we had properly fucked and I was desperate to get my hands on him. His fingers slipped between my knickers, pushing easily between my lips. I let out a moan, momentarily forgetting where I was.

“You’re soaking.” He whispered, pushing me harder against the wall. I smiled into his neck, knowing that I was probably wet even before we got to the cinema.

While I was reaching for his belt buckle, I caught a movement in the corner of my eye and noticed the friendly guy who gave us advice upstairs was standing by, watching.

“This is it.” I thought to myself. “This is what you want right?”

The seedy, dimly lit room; the filthy carpet; the creepy stranger watching on while the only thing protecting me was a guy in skinny jeans and an expensive shirt.

So then why couldn’t I get into it?

But then I heard a groan coming from the doorway, and noticed Mr Friendly was wanking only a meter away from us. “Can’t blame me from wanting to watch.” He said when we stopped what we were doing.

We finally found a small room with a couple sitting on the worn, leather sofa staring at the TV.

“Let’s stay in here.” I whispered to Jack. “At least there’s another woman.”

They both looked as awkward as Jack and I felt and before any of us could say anything, we were followed by five other guys who decided to hover in the doorway.

“I didn’t think so many guys would be here.” Jack whispered. “It doesn’t feel right.”

We had two options, we could both just suck it up and stay, or we could make a run for it. In one last attempt to make it work I reached for Jack and said, “Do you want to go back to that empty cubicle and I can suck your cock?”

He looked around at the other men in the room for a second, and then shook his head.

I squeezed his hand tightly until we hit the street and the smell of fresh air filled our lungs.

We all but ran back to the train station trying to get as far away from the place as possible. Only when we were standing on the platform did we begin to laugh and Jack grabbed my face and kissed me hard. “Oh my god!” I gasped, between his kisses. “I can’t believe that place.”

We sat in a quite part of the train as we made the long journey back to my apartment. “You’re still soaking wet.” Jack smiled, as he subtly slipped a hand between my legs. So maybe there was a part of me that secretly enjoyed the experience.