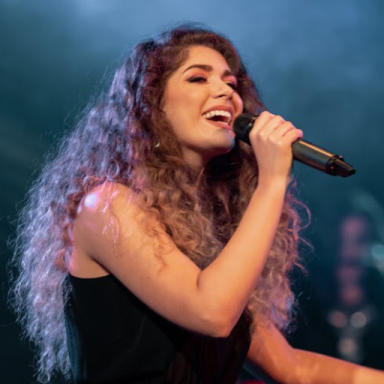 I was going through my senior year of high school back in 2015 during the fall semester. I had gotten my license three months earlier and was finally allowed to drive my new car around all by myself; it was a 2005 Honda Civic, tan in color. I was living in Brandon, Florida at the time, where I had been raised.

I found myself running a few errands after school one day and then heading back to catch an annual function our student body did every year. My sister, Savanna, asked me to bring her some food, so I’d just made a quick stop through Wendy’s before I started on my way back up John Moore road.

I remember my radio was playing—I wasn’t thinking about it too much in particular. My drive was just about a straight shot for five miles or so on a two lane road, and it was almost 6 p.m., so the traffic was starting to calm down. There were several neighborhood entrances to the right of me as I made my way towards Bloomingdale Ave from 60.

Near the entrance to one of the neighborhoods, there was just the tiniest dip in the road, almost like a small valley, if you can even say such things about a state as flat as Florida. However, it was just enough for someone to glance over my low-to-the-ground, neutral-colored vehicle if they were rushing. I remember when their Lincoln Navigator first started turning across my lane; I slammed my breaks so hard that the squeal from my tires had people half a mile away making the trip to see what happened. And then, of course, the sick sound that two vehicles make when they collide surely added a spark of amusement to the event as well.

I always thought that my life would flash before my eyes if I got into an accident, but it didn’t. Instead, I wondered what Savanna was going to eat and how she would be getting home. And it was that quick—slam. Airbags. Smoke.

I had closed my eyes when we first hit and barely remember feeling anything after that. When I realized I was still inside of my body, I opened my eyes to a cloud of gray. I instantly snapped into survival mode, unsure if there was a fire anywhere or what was causing the smoke inside of my vehicle. I got out immediately and saw an elderly husband and wife hopping out of the other vehicle with their grandson. I was completely stunned. I started trying to ask them what happened and if they were okay but was cut short. They immediately began calling over to me that the accident was my fault, saying that they couldn’t see my car. They didn’t even ask me if I was okay.

Almost immediately, the two people driving in the car behind me got out and pushed my crumbled vehicle over to the side of the road and into the grassy median. I barely even remember it happening because I was being yelled at and in a complete state of shock. I immediately called the cops, reporting the accident and where we were located. Then the people who had pushed my car out of the road went and parked behind it, hopping out to come and stay with me. I noticed they were also a couple, two women around my mother’s age.

The cops arrived and I still hadn’t been able to get a hold of my parents. I spoke with Savanna briefly enough to burst into tears and traumatize her before ending that call as well. The couple who had run into me were hovering around the police officer, making up lies that I was speeding and that it was dark out and my lights weren’t on.

Fortunately, it was light out when they hit me. Unfortunately, it started growing dark within the very next 10 minutes. And no, my lights were not automatic. Or on. Because at the time, they did not need to be. Regardless, they stood by the officer and kept him away from me as much as possible, hoping they could pin things on the brand new, 17-year-old driver. And no, I was not speeding. But 40 miles an hour can still do some damage.

The other couple stayed with me, talking me down, helping me navigate what to say and what not to in regards to the police officer so that I wouldn’t be taken advantage of. At some point in the endeavor, the older couple took a better look at me. They told me they attended my church and had actually heard me sing there before. And then they continued to try and talk their way out of fault with the officer.

The other couple stayed with me until I got a hold of my parents out in Tampa and they were finally able to get to me an hour later. The women gave me their information in case the police needed anything else before they went home, knowing they’d left me in good hands.

Later on, after the dust had settled, I ended up with no blame, and the fault went fully to the couple that were apparently fellow church members of mine. My church was a place that I not only went to on Sundays but grew up in. I was schooled there from first through eighth grade before going to a public high school. And oddly enough, it was located right up the road from where I was hit.

Had I not hit my breaks when I did, I wouldn’t have made it. If you haven’t seen a Lincoln Navigator before, you should know that my mom’s car was the same exact model as theirs. She had been in a number of her own scuffs before, and each time, her car was barely scratched while the other was brutalized. But after this accident of mine, their tank of a car was probably totaled the same as mine. The front left side of my little vehicle was mutilated like their front right, and if not for a half seconds difference, it would have been my door on the drivers side.

I just couldn’t get the whole thing out of my head—I obviously had injuries that even today I have not completely recovered from in regards to my spine. My hips were black, purple, and red. I couldn’t move my neck for days and remember suffering my way through show choir dances for a competition we had later that same school week. But the most interesting injury? I happened to have my opal cross necklace on. It was the one my mom had gotten me when I was confirmed in the Lutheran denomination I grew up in, this same church that these people who nearly killed me and blamed me for it also claimed to attend. And the two women who were selfless, loving, and caring beyond any expectations? A lesbian couple. A couple that, at the time, would have been told not to attend my church for living in sin. And yet, I felt like if I saw Christ anywhere in my situation, it was through them.

When I was hit, my seatbelt was sitting right over top of where the necklace sat on my chest. I didn’t even notice the tenderness there until a day or so had passed and I discovered a bruise where the seatbelt had saved my life by holding me in place. However, my cross ended up bruising me. I remember being perplexed; I would have expected the symbol of my faith to be the only place I was untouched. And yet, it hurt me.

Years later, I have not forgotten my car accident. And I have not stopped wondering exactly what God was trying to tell me through it. What I have come to realize today is this: Sometimes, God doesn’t look the way we expect Him to. Yes, the cross bruised me. But if it hadn’t, I would have died. Sometimes, the hits we take in life seem painful but are really just a tiny bruise compared to the magnitude of what was actually coming to destroy us.

While God saved my life that day, He also gifted me an experience and a perspective that I will never forget: He gave me my own live-action version of the most popular parable story, The Good Samaritan. I played the misfortunate one. All the other witnesses played those who ignored the misfortunate one—several others could have helped me but drove away, saying they had places to be. The ones who the world would have expected to come to my aid ended up being the ones who inflicted the harm and then tried to manipulate me, as well as the authorities, into believing it was my fault. And those who I wouldn’t have expected to help me? A pair that many people would condemn without a second thought.

I do not claim to have all of the answers, I would just like to challenge you to ponder. I would like you to see that living for the Gospel message looks different than we think it does, that we will see Christ in the places we least expect to see Him and likely not find him in the places we expect to find him. Sometimes, the cross will bruise you. But I can guarantee the tiny pin needle that slipped past your guardian angels is a million times less in magnitude than the storm that Satan initially sent for you. Sometimes, it will bruise our bodies. But most often? It will bruise our egos. And we should invite it to do so.

I hope that this story challenges us all to see where the cross has bruised us and what God is trying to reveal to us through it, to see that Jesus is found in bravery, boldness, a sound heart, and a kind soul, no matter who it belongs to.

I can move my ears at the same time and seperately!

Kids Told Awful Stories About ‘Jack O’Lantern Road,’ But The Truth Was So Much Worse.