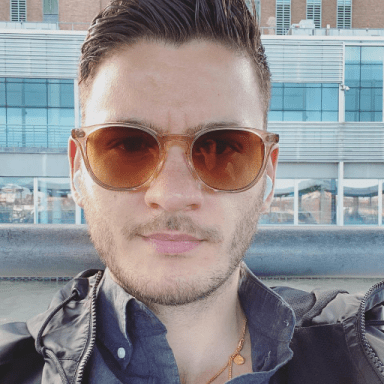 In our minds, and in the minds of others, our names form and shape ideas of who we are. What happens when the name you are given becomes a tool to suppress who you truly are?

My birthdays have usually brought an onslaught of trauma with people using my former name, Alex, to wish me happiness. It’s a perplexing feeling to suspend joy and despair in a single sentiment. I turned 32 this past July, and for the first time in my life, I was happy it was my birthday. For the first time, I woke up to texts and alerts of people wishing me a happy birthday using my real name.

I have tried to write this essay for several years, but the burden of exploring my past, reliving it to understand how and why my name changed, has been extremely heavy. I recently found the courage to demand people call me by my name, and in doing so, I found the courage to uncover why it changed.

My name emerged from trauma. It wasn’t a conscious decision, and I didn’t look through a list of popular names to choose it. It simply manifested itself.

I didn’t know it at the time, but my mind was finding a way to cope with the trauma I faced growing up Queer in a world that rejected me. Before I even knew what it meant to be gay, the world labeled me so in the 3rd grade.

Much of my life has been shaped by what the world has forced upon me. On the playground, my aversion to sports was not for lack of interest, but because the other boys told me to go away. When I found refuge skipping rope with the girls, the adults told me to go away. There was nowhere else to go, so I sat and watched everyone else enjoy life.

At home, I played with my Power Ranger toys, and video games, and while I wasn’t good, I played basketball with my brother in our backyard. At my cousin’s house, she and I played with Barbies, we played house and dressed up. I enjoyed all of these things. While I longed for a Barbie of my own, I knew that some of my interests had to be hidden, or I would lose that haven.

When I reached middle school, I stayed on the sidelines watching everyone else experience their attractions together. I couldn’t share who I had a crush on because not only did I know I was gay, but the world told me it was wrong. I struggled for three years before finally accepting my identity, but even after accepting myself, I knew I had to hide who I was.

This was the point in my life that cemented my mental solitude. There were two difficult realities I faced in accepting my identity. The first was accepting that I wouldn’t be loved in the world. The second was accepting I would lose my family and be alone once they found out. This was 2002, just four years after Matthew Shepard was brutally killed for being gay. From that moment, my mind began preparing me for a life alone. I had one goal; hide everything about myself until I could find a way out.

In those years, I hated every part of myself that hinted at my sexuality; my voice, my mannerisms, my interests. I wanted to fade away, disappear so that no one would find out who I was. In doing so, I struggled to find value in my life. I spent every minute monitoring myself not to accidentally reveal something that would out me. This life consumed me.

People praised me for coming out at the age of 15, but the truth is I had nothing to lose. I had stripped myself of everything that made me a person. I lived in my head all alone. My coming out was another thing forced upon me — I had no choice but to reveal my identity because the only other option was unimaginable. My school life improved, but I didn’t unlearnkeeping people at a distance. I bounced from friend to friend without ever making a meaningful connection. The acceptance I gained in school would feel conditional on the heteronormative characteristics I adopted to hide. Even though I was out, I was still not myself. The disguise I had created to protect myself became my prison — reinforced with praise for not being too gay. For a year, I was able to be out at school and remain hidden at home.

My life erupted at the end of the next summer when my mom confronted me about my sexuality. I was defeated in trying to figure out my life and couldn’t deny it to her any longer. I wasn’t kicked out as I feared, but the actions that followed weren’t much better. The divide my mind created to prepare myself for losing my family deepened in these years. I thought being out would be a relief, but it too was forced upon me, and I hadn’t prepared to face years of erasure and denial from my family. My family’s beliefs, opinions, and narratives were forced upon me. I spent the next several years fighting ideas of who I was supposed to be while trying to figure out who I really was.

I finally escaped to college in New York City. I thought this would be my coming of age story, a fresh start, but the darkness followed me. I only had a few years to unravel all the harm to my psyche. It wasn’t enough time, and I wasn’t even aware of the work to be done. I fell into my old habits. I didn’t know how to connect with people, yet again, I watched from the sidelines.

After college, my new name started to emerge in small ways. My mind craved the freedom to become someone without a history of trauma. It felt thrilling to introduce myself using my new name, but I hadn’t considered it seriously — it was something fun to do. With each new person I met, I began to see a difference in who I was with my new name. Every time someone called me by my new name, I felt a rush of confidence and joy. It made me brave; I was more open about myself. I was finally honest.

This was when I began to feel the pain of being called by my former name. Every time I hear that name, all of the feelings, emotions, and experiences of my childhood trauma come rushing back. That name forces upon me an identity that is not mine. It hurts.

Since then, my life has felt like a tug-of-war between these two identities; the charade and the truth. It was at a new job, where I introduced myself using my new name, that was the positive turning point in my life. Hearing people say my new name daily finally allowed me to put aside my trauma and discover who I could be without it. My name gave me the strength to find my true self in the web of deceit I had spun to protect my younger self.

It’s been seven years since my first day at that job. I couldn’t be prouder of the person I have become today, which has only been possible because of my new name. It is very much still a process to unlearn all the harm I inflicted upon myself back then, but my name has given me the agency to do so.

This wasn’t supposed to be a coming-out story. I share all of this to help explain the person who grew up with my former name, a shell of a human whose life was enveloped in a dark haze of shame, self-loathing, confusion, loneliness, and depression.

We spend our lives learning, but rarely try to unlearn, unless there’s trauma. I spent my childhood hiding who I was. Now I spend much of my adult life trying to unlearn those lies. My name helps me distinguish which parts of me were created to protect my younger self, and which parts of me are truly me.

When you call me by my name, it reaffirms in my mind that you see me for who I am today. It reminds me that my trauma doesn’t define me, that I deserve to be free of my pain. My name gives me permission to be myself.

There are no more excuses. If you can’t learn my name, if you can’t see who I am, if my pain is an inconvenience, you don’t deserve to be in my life.

Call me by my name.

I think I think too hard. Follow Lex on Instagram or read more articles from Lex on Thought Catalog.

Would Your Life Be Different If Your Name Was “Ghetto”? These 21 People Explain All.

Death To Self: How My Unhealthy Relationship Became A Cult

This Is Why I Chose To Change My Name

Glory Hole Diaries: 25 Super-Sleazy Real-Life Tales Of Oral Sex From Behind A Wall

I Need To Say Goodbye