My first job in New York City was as a Hostess at the Applebee’s in Times Square. Why, yes. It is the largest Applebee’s on the planet! My job was to stand behind a desk at the front door, greet guests, announce numbers of parties walking up the stairs, and make sure that only guests used the bathrooms. There was no janitorial staff. For $7.25/hour, I had the honor of cleaning the bathroom, and unclogging toilets eight times per shift.

I lasted two weeks before I found something better. It was another Hostess job this time at a 2-star restaurant on the Upper West Side. They paid me $12/hour with no possibility of a raise, only the possibility of a promotion. Ownership, managers and servers constantly yelled me at over situations that were far beyond my control and frankly, above my pay grade. When scheduled for the coat check, I would make upwards of $300 in tips. These tips went directly into a manila envelope at the end of the night as profit for the restaurant. I was allowed to keep my $12/hour, minus taxes.

After that, I moved on because I had hit the jackpot. A small wine bar on the Upper West side was looking for servers and decided I was trainable. The server’s paradox is that you can’t get a server job (and make that fat server cash) unless you have previous experience serving. You either lie about previous experience or hope that someone takes a chance on you. The floor manager at this place liked me enough to give me the old college try. I was a terrible server at the beginning. I couldn’t open a bottle of wine with any grace. I stumbled over verbal specials, and I let the bitchy Upper West Siders smell my fear. Still, they kept me on staff because I tried so hard. 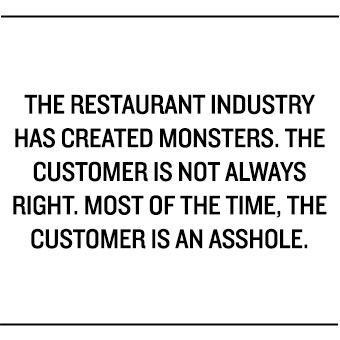 As time went on, I moved up in the ranks of New York City Server jobs. I worked mostly in steakhouses. Once the environment became too toxic, I moved on. The one factor that always remained in any such job was the obnoxious guests. The restaurant industry has created monsters. The customer is not always right. Most of the time, the customer is an asshole. Take it from me. I cut a guest’s steak for her once. At the table.

My most recent (and last) restaurant job was one that I thought I’d hold onto for at least a few years. We’ll call this restaurant the “Roman Holiday”. For once, I liked the people that I worked with, and the people I worked for. This job came complete with a predictable sum of money deposited into my bank account each week. I felt like a shelter dog that had found its forever home. Admittedly, the workload was overbearing. The food and wine menus changed on a daily basis. This was fine for those of my co-workers who were truly passionate about food, wine, and hospitality. After many months of trying to be the good server on my Roman Holiday, I finally had to admit that I was on the wrong path. I had sold out. No paycheck is worth the stress that I felt working as a server.

One day, a few months ago, I had a guest at the “Roman Holiday”. It was the kind of woman who shouldn’t have left her apartment without having coffee in the morning. Some people owe it to society to drink coffee before they leave the house. You know who you are. I greeted her, and ordered her cappuccino. Naturally, she complained that it was taking to long. I apologized and assured her that the barista could only work on three drinks at a time, and her ‘ccino would be up in a mo. She shrugged it off and started asking questions about the menu. She needed to know exactly what was in the yogurt because she knew she wanted to modify the order, but she wasn’t sure how she wanted to modify the order. Then she started asking about the cereal.

The cereal at the “Roman Holiday”, like everything else, is made in house. They fill a third of a bowl with the cereal, slice a quarter of a banana and throw a few dried cranberries on top. About 5 oz. of milk is served in a quartino on the side. For all of this, they charge a whopping $12. I try to steer people away from this item, being the penny pinching, living hand-to-mouth, buried in student debt, millennial that I am. Still, her questions persisted, and the conversation went like this…

Cereal Woman: Is it like granola, or is it muesli?

Me: I’m sorry, Miss. I don’t know what muesli is. Can you describe it for me?*

Cereal Woman: (in a raised voice) Muesli. It’s MUESLI. You’re a server. You should know what muesli is!

* I have since Googled what muesli is. Gross.

At that point in the exchange, I excused myself to the pastry kitchen where I often cried. The pastry kitchen was my safe place where they baked magic, and rarely judged me. In that moment, in the safest place at the “Roman Holiday”, I finally said the words out loud. “I can’t do this anymore. No one’s cereal is worth my dignity.”

I put in my notice about a month and a half before I actually left. The last day, didn’t feel like the end of an era. It just felt like another day of the grind. A week later, I woke up at 8 AM, instead of the usual 4 AM, and I realized that I had gotten myself exactly where I wanted to be in that moment. I’m sitting at my computer today, hustling for my new and improved career. I haven’t served anyone cereal in two-and-a-half weeks. I don’t know how I’m going to pay my September rent or the bills between now and then. You should see the smile on my face.

Here’s Everything I Learned After Quitting My Job, Leaving Everything, And Moving From New York To London