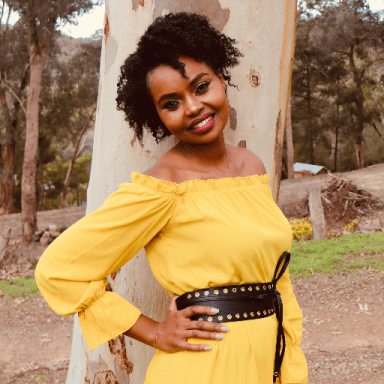 I remember it as if it was yesterday. As I sat sipping my chai latte, he stood up and towered over me. The anger on his frowning face was intense enough to put me on the edge. “For Pete’s sake, what is it this time? Today is supposed to be different,” I thought to myself. I could feel the all-too-familiar twist of tension and anxiety slowly rising from within. A huge chunk of our one-year relationship had been marred by moments of wrangles and constant strife.

Earlier in the day when he suggested a coffee date, I thought this day would be different from many others. That it would bring a gentle breeze of fresh air into our troubled relationship. That today we could breathe, if only for a moment. That we could be a normal couple. However, within the first hour of our coffee date, I caught a glimpse of something in his face. A dullness. A wave of anger. Then I realized I’d been wrong to think it was ever possible to be a happy couple.

This was how the cookie crumbled: “This is the last time I’ll ever take you out!” my now very angry boyfriend was yelling, putting his cup down. A minute later, he stormed out of the coffeehouse. Later on, I came to learn that he’d walked on our date because, according to him, I’d been busy looking at other men.

Anyway, as I sank in my chair, as confused as ever, I tried to wrap my mind around what had just transpired. Two hours went by as I unloaded my thoughts in self-reflection, carefully following the trail of our relationship for the past one year.

Then it dawned on me.

My boyfriend had seen me as a problem all along. Every snide remark, every little mishap said as much. I also realized it was always going to be this way. I’d remain trapped in an endless cycle chasing after his validation, always toeing the line, drowning my voice so that his could remain amplified.

I suppose this is the part I’m supposed to say I walked away to my happily ever after. That I found and yanked myself before I could sink in too deep. Not so. I continued to stay. And even ended up marrying him. Why?

I was a 24-year-old woman who believed she could change any man. Yeah right!

I was a 24-year-old woman who was wrapped in such deep insecurities that I permitted his demeaning narcissistic remarks to put a veil on my judgment.

I was a 24-year-old who was ensnared in a cocoon of her own self-deception, believing that if I changed myself and my habits, I’d finally get this wife thing right. Is that so?

Fast-forward: The relationship ended, needless to say. So, why am I telling you all this?

I can rightfully say I’ve honed my intuition to discern narcissistic traits from miles away.

I’ve earned the right to talk about habits of narcissistic boyfriends and husbands.

I’d like to show you how to dodge the bullet of narcissism — because it almost left a dark hole in my soul.

Being in a relationship with a narcissist is like climbing a mountain without ever arriving at its peak. It doesn’t matter what you do or how many times you do it, you’ll never be good enough. Heck, you could give them your small toe and it still wouldn’t be enough!

I know what you’re thinking: It’s obviously because they are self-absorbed. You’re right. But it’s a little deeper than that. Narcissists have a fleeting sense of self-worth—a hair above the flat line at best. That’s why they’re always hell-bent to demean and belittle you. They relish seeing you spin on their thumb because it gives a false sense of control and compensates for the inadequacy within.

What you need is a partner who respects himself enough to enter your life as complete, worthy, and enough without needing to trample on you to elevate his worth and quest for validation.

A before and after picture of my life in relation to the relationship looks like a transition from a well-formed sculpture to a fragmented and chipped one, because that’s what narcissists do. They diminish you slowly. And if you’re like me—who tried to hold onto the faintest sliver of hope that the relationship was salvageable—you keep on yielding.

You yield bits and pieces of your life by engaging in activities that he wants you to do as opposed to those that fulfill you. You learn to stifle your opinion lest you come up with smarter ideas than him.

You learn to mute your voice for fear that your words might be misconstrued. You perfect the art of walking on eggshells because you’re never sure where the trigger for the next explosion lies. You do all this to keep the peace but this costs you your self-esteem, worth, freedom, happiness, mental, and even physical health.

Your ideal partner should have a deep emotional and spiritual abundance, supporting your endeavors and projects with the understanding that when you thrive, so do they. They shouldn’t feel threatened by your opinion and should encourage you to think for yourself and find your voice.

It’s impossible to enjoy a meaningful connection with a narcissistic man if you’re a woman because, for him, a woman is merely an object in a sexual contest. He attaches no value to you because you’re only a way for him to elevate his status. He’ll cheat on you and have no qualms about it.

Beneath the façade of his immoral delinquency, the narcissist is selfish at best and lacking in confidence at worst. He operates from a “dog eat dog” mentality, with his modus operandi being “I get what I want, no matter who gets hurt in the process.” A relationship with him leaves you with a lingering stench of feeling used and taken for granted using his psycho ways.

Much later, I came to understand the real reason why my ex-husband was so intensely opposed to my association with some of my friends wasn’t because they were bad people. Quite the contrary. It was because they were smart enough to see right through him and it terrified him.

Your ideal partner should be grounded in self-respect and extend the same to you because they see you as an equal human who deserves to be heard. Because they are governed by principles, they should conduct themselves in transparency and self-reliance.

A narcissist keeps you longing for the day he’ll recognize the beautiful rose that you are. Your qualities, strengths, capabilities, and the essence of your soul. You hope that one day, he’ll make you happy. But that day never comes and instead he continues to tighten his grip in the relationship and hurts you even more. Before long, the rose slowly dies on the vine.

Here’s what I know for sure: It’s practically impossible to change a fully grown narcissistic adult unless they want to. Attempting to do so is committing suicide. So what can you do?

1. Put yourself first. Determine what your needs are and get intentional about pursuing them. A lot of people have committed suicide and developed mental health issues because they allowed the needs of others to take precedence over theirs. There’s a line from an old song that says, “You’ve got to stand for something or you’ll fall for anything.” When you’re unclear about what you want, you’ll end up settling for anything.

2. Refuse to hide behind the veil of denial. If your relationship isn’t working, stop acting as if it is. The cost of keeping up appearances is always high and never worth it. Everyone deserves to experience real and genuine love. You included.