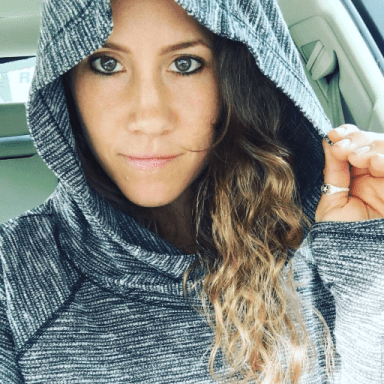 Right about now you’d probably be finding a reason to text me. That was the pattern with you and me. I’d say, “Don’t come back unless you want a relationship,” and you’d agree, but then I’d see your name on my phone three to nine months later. You were never ready, but I clung to the idea that you would be eventually.

Even though I was the one to set the no-contact boundary each time, I couldn’t help fantasizing about the day I’d see your text interrupt whatever mundane scrolling I was doing on my phone. I felt this sickening mixture of expectant hope that you’d come back, rational knowing that it was better that you didn’t, and deflating sadness that you were staying away.

Each and every time you came back felt like the circus had come to town for my wounded, waiting, hoping little heart. Your texts after months of silence made my heart beat so fast my hands would shake. It didn’t help that you had a flair for drama each time.

I hated it, but I also loved it.

You’d been thinking about me for months? That song reminded you of me? You couldn’t help but reach out because you missed me so much?

But then we’d talk and I’d realize you were no more ready for a relationship with me than the previous time you’d come back. The high of you coming back was quickly replaced with exasperating confusion and frustration. Frustration that I had set a flimsy boundary again and that I’d let myself get excited again.

So I’d set a new no-contact boundary, thinking, I’ll be firmer this time! I don’t need to block him because we talked and he understands. And on and on the carousel went.

The most recent time I saw you, though, something finally broke inside of me. You managed to find me at Burning Man, of all places. We hadn’t talked for six months at this point, and I was finally starting to feel untethered from the chain of hope for your return.

“I have something for you.”

Those were some of your first words to me after we’d embraced, our dust-covered bodies finding the familiar shapes of each other again after so long.

“Wait, really? You were expecting to find me here?”

“Well, yeah, I knew I’d find you. I brought this for you. I found it when I was traveling in Africa and it reminded me of you.”

You handed me a small pink and green rock. A tiny but powerful gesture; I absolutely loved collecting rocks in foreign places, and you knew this because you’d so often tell me it was adorable when we had traveled together. My heart fluttered. All semblance of boundaries dissolved within me. That familiar saccharine hope started to multiply in my chest like a cancer.

We got to talking, and it was all inside jokes and knowing looks, like it always was with us. Eventually, though, we got onto the topic of dating, and you asked me about my recent dating experiences and told me about yours. It felt all wrong. People with our type of history don’t discuss those things.

“So why aren’t we dating?” I blurted out, emboldened with frustration.

“Um, well, I just moved to San Francisco, and I just don’t really know what I want right now,” you stammered. I had clearly caught you off guard.

“I don’t know, I don’t think I have romantic feelings for you anymore,” you said. “I just don’t think I’d ever make you happy.”

“Then why do you keep coming back?”

It felt good to finally voice my frustration to you, rather than playing out scenarios in my head.

“I just care about you and I want you in my life,” you explained. “I didn’t want to wake up in five years when you’re married with a second baby on the way and feel like you were gone forever.”

“But you’re torturing me,” I said. “Every time you come back, I wonder if something has changed, but it’s never different. My heart can’t take it anymore.”

Tears streamed down my face. My hard determination cracked and revealed all of the softness I’d been hiding from you.

“I… I’m sorry,” you stammered. “I didn’t know I was upsetting you so much. I just like talking to you so much and I missed you.”

“Stop!” I choked out between tears. “Just stop. Stop saying you miss me.”

I looked up at you and saw that your eyes were glassy too. You hated upsetting me. But seeing you upset now just added to the mountain of grief that swelled in my chest. I finally understood that the specific way you looked at me, the tears, and the little gifts you bought for me all coexisted with your choice not to be with me. You were never going to want to date me. You were just going to keep coming back with mixed messages every three to nine months in perpetuity. Your ambivalence would be the end of me if I didn’t finally set a real boundary.

I walked away from you that day and cried my eyes out, and then I opened my phone and I blocked you before I could second-guess myself. I had never blocked anyone in my life. I always told myself that I had the resolve to deal with it rather than shut it out. But after riding that cruel carousel of dangling hope with you for years, I finally understood why blocking was sometimes necessary.

I didn’t block you out of resentment or hatred or because I thought you were a bad person. I blocked you so that I wouldn’t be sitting around, heart jumping every time my phone dinged with a text that might have been you. I blocked you so that my heart would stop playing that game of needing you to leave me alone but secretly wishing you’d be back. I blocked you because my heart wasn’t strong enough yet to see your text and not take the bait.

I blocked you because I needed time to heal and forgive you. Resenting and despising you was a tempting way to get over you, but that felt heavy, and I hated it because I didn’t really hate you.

And eight months later, I have to say that it’s working. I still think of you and I still miss you, but I’m no longer tortured by you. I don’t know if you’ve tried to text me, and something about that has set me free. I’m finally starting to feel the soft equanimity towards you that only forgiveness can bring. And that, to me, is true freedom.

I love to collect rocks from my favorite places in nature