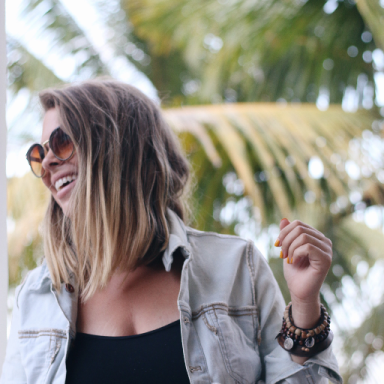 The memories still burn—less often now, but the remnants are there, taking up unnecessary space and reminding me of all the times I tried like hell to be enough. I had always made room for men that didn’t deserve a home in my chest, and there are times that I’d like to tell the asshole that almost did me in to go fuck himself.

We all know the one, no? The one that lights our crazy. The one that calls us psycho when we call him on his shit. The one that can manipulate and twist words and scenarios like shoe laces so that we’re left questioning our own sanity. The one who comes home from work two hours late with makeup on his white dress shirt, swearing up and down that he had an after hours work meeting. Yeah, that guy (or boy—whatever synonym feels most appropriate). He was nowhere near a man, either way. This is the one who showed me what a liar is. The one who made me despise being lied to. God, he could lie so damn well it’d make my whole life feel like a gaslight as I searched for what I could no longer see through thick clouds of my own confusion— a false reality painting me somewhere in the middle of a scenario I no longer recognized. He was that good.

The lies would come like someone left the water running for days, except the well never ran dry. They were always disguised in truths and half-truths I wanted to believe. And did believe most of the time, despite the desperate pleas from my intuition that was screaming for me to listen.

It’s impossible to try and understand the whys of people who lack empathy—the narcissists and sociopaths of the world who can lie as easily as they speak. It’s impossible to understand because our hearts aren’t wired that way, and I was too busy wanting him to change. Thinking I could be the reason he would. Wanting so desperately to be that significant.

The stain he left on me, it never quite seemed to come out in the wash of all the tears I cried when I would find out something else, something new. He’d take the axe from the shed of his twisted mind each time, chipping away at my wide-eyed belief in love.

Because sometimes we don’t love ourselves enough—or at all.

We don’t end what we know we should because we’re confined to our fear of being alone. So our hands remain bound, leaving us to drown in our unworthiness while we desperately dig to find love in the people who don’t know how to.

So, taking a word from the wise, I had to find the purpose in this pain in order to heal it once and for all. These were the lessons I had to look for beneath the cracks and under things that, at the time, weren’t obvious to me. The why me’s didn’t work when it came to my side of the street. What he did was on him, but my willingness to take it was on me. And even though it took me 10 years to find the golden nugget of truth and purpose in what I didn’t understand for years, I am now grateful. This was my lesson—self-abandonment or self-loyalty.

You can probably guess what I chose.

I chose to find my stonewall strength. I chose to stop hurting myself each and every time I made the decision to stay. And even though I have these memories of this version of him stained on my psyche, I am free because I freed myself.

He taught me to hate lies, but he also taught me to love the truth—to look for it in the eyes and hearts of men willing to speak it and live by it. Isn’t this the double edge sword of unfortunate situations we sometimes find ourselves in? These things that hurt us, but also, eventually bring even greater reward? Rewards bearing some of life’s greatest lessons. What greater reward than the opportunity to finally choose yourself? What greater reward than to experience something that had the capacity to break us into a million pieces but didn’t, because in it, we find our strength? The strength to walk away with grace, taking with us this newfound love for ourselves. No longer giving it away to those who think love is some kind of reckless game or that hearts are something you fucking play with.

So, to the one that almost did me in, go fuck yourself—but also thank you. Thank you for showing me every bit of what I never want ever again. Thank you for pushing me so far so that I could find my two legs to run as far and as fast as I could—away from you and toward my damn self, once and for all.

Words are my potion. My medicine. My cure.