Skip to content
Report This Article
What is the issue?
This story is an exclusive excerpt from The Art of Nostalgia.

He said he might fall asleep on the train. I said I brought my music. My head rested on his shoulder as the conductor punched two holes in our tickets. We saw black. We were in a tunnel. He said he’d help me with my luggage as we climbed the steps to the outside.

I said the subway is this way. We saw the bustle on 7th Avenue. The shadows on city sidewalks. Feet scurrying. He said the train should be coming. I said the hotel is only a few blocks away from the station. I said I love the charming streets. The village Brownstones. He said to turn this way. We entered the hotel lobby. Art Deco. I gazed out the window on the tenth floor, and I said I’ll pretend this is where I live. We said we should take a walk in the neighborhood. I said we should go to Washington Square Park. He said Corner Bistro, famous for their tasty burgers, is nearby.

I said the park is empty at twilight. We were voyeurs as we sat on the fountain steps, and a man blew gigantic bubbles by the arch.

I ogled at the side streets. I said to look at the shops—cheese, records, books, psychics. I said I was overly-stimulated by everything around me. He grinned and said my word choice was interesting.

I said we should turn left, onto a block with an enchanting cathedral. Apparently, it was a synagogue. A man approached us and said a service should be starting soon. He asked if I was Jewish. I said yes, but that I’m not very religious. He asked where we were going. We said we just wanted to eat. He told me to wear a hat. Girl, it’s cold. I laughed. Loudly. I said okay. We all need armor sometimes.

At 10 PM, I said I was hungry again. He said you’re always hungry. In the lobby, we passed women who were sipping on martinis. They were in posh dresses. I chuckled. I said I was the epitome of a slob. Sweatshirt. Pajama pants. Hefty jacket. He said we can go to a hole in the wall pizzeria. One dollar for a slice. I said we shouldn’t ask how it’s being made. He smirked and said it’s better not to ask questions.

We ate our cheese and mushroom slices in the hotel bed and sipped on red wine in plastic cups. I said we can watch Chandler say something hilarious on Friends.

I said the Saturday rain makes my body feel heavy. Lethargic. We found a French café for brunch. I said I like anything French. He said the crispy fries dipped in herb aioli mustard will remedy our morning grogginess.

We said we should stay inside because of the weather. At the Met, he said we can check out the modern art exhibit. I asked him for his thoughts. He stood back and studied the surrealism. I said I liked Chagall because it reminded me of a Weepies song. We float like two lovers in a painting by Chagall.

We said we were tired. I said we should cut through Central Park on our way back to the subway. The park was quiet, wet, snowy, idyllic, romantic.

He said he wanted to check out The Noodle Shoppe for dinner. The waiter explained the various textures of the noodles. I said I didn’t know there were so many. We talked in this old fashioned restaurant with red walls.

Back at the hotel room, we poured wine into our plastic cups, and we wholeheartedly cracked up during Grease 2. We said it was so bad, it was good.

In between sips of mimosas and bites of tortilla chips, I said we could relay our personal highlights from the weekend. It was Sunday. I said I wanted to hold onto it all a teensy bit longer.

He said we should come back again as my head rested on his shoulder, and the train moved along the track, back to Long Island. Further and further away from our wintry weekend in the West Village.

Lauren Suval is a writer and the author of the book The Art of Nostalgia. 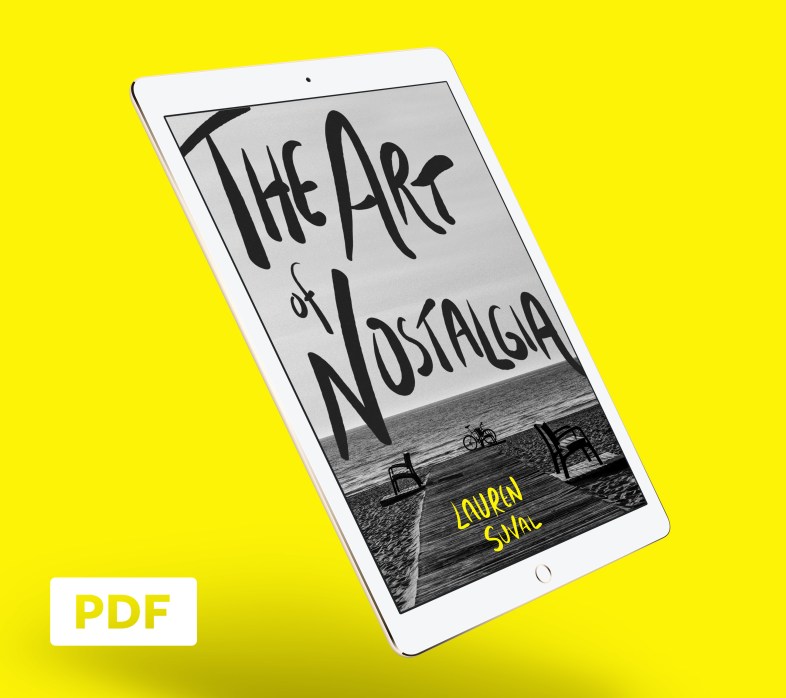 The Art of Nostalgia is available here.