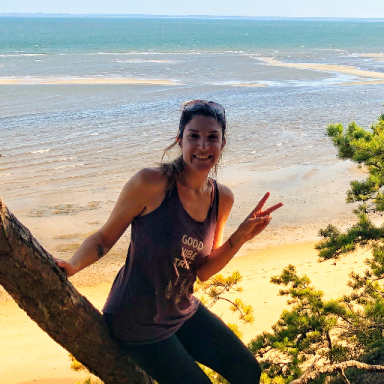 I was seven years old when I first learned that marriage doesn’t always mean forever. It’s interesting how our minds vividly playback certain moments in our lives.

Our second grade class was forming a line to the cafeteria. Books and random colors of construction paper were piled high in front of a line of windows. My childhood friend turned to me with the maturity and ease of an adult, saying objectively, “My Dad doesn’t live with us anymore…but it’s okay, sometimes people love each other but can’t live together.” I remember staring blankly at her, then shrugging my shoulders. Love was a foreign concept to my young brain, as it should have been. It would take years to even begin to understand the mystery behind it.

As time went on, separation, divorce, and splitting up all became a norm. It was the topic for gossip, a good storyline for a girl’s movie night, and at times my shoulder was there for a friend to cry her way through the pain of it. But at 41, when the reality of separation is suddenly holding you in its dark depths and your world has been cracked open, you cannot fathom how it was possible to become desensitized by the intensity of the storm it brings. When it becomes your life, your situation, the rules change.

This choice to separate, to dissolve a union, comes with a fierce understanding of what I crave out of this new life I have stepped into. It also comes with resistance and fear. There is the fear of judgment, even though I have the self-awareness of knowing that standing in my truth is a courageous act in itself. Fear, however, loves to hang out in the room when we are at our most vulnerable. Vulnerability that will lead to strength, guidance, and grace.

The comfort zone that surrounded me for so long was suddenly ripped out from under my feet, and now I’m diving into an unknown. I’m adjusting to a new routine that is asking me in every moment to reclaim my life as my own but has me repeatedly staring down a path that feels foreign and unfamiliar. Yet isn’t it those paths that we fear that lead to the most amazing places?

I have knowingly made the choice to grow from a place of pain and discomfort. A place where I can only measure what I have lost. There is an unraveling and unbecoming of all the pieces of myself that were intertwined in a relationship that once thrived on a future. The life plan has changed. Paradoxically, it is the most terrifying and heartbreaking yet exciting notion I have ever known.

Life is meant for growth, for evolution. If we are not evolving, we are not moving. If we aren’t moving together towards the highest version of ourselves, we aren’t truly living.

Love can be deep, beautiful, messy and, dare I say, not enough. There are times, I have learned, where letting go is the most loving thing you will ever do for another.

For the first time, I am asking myself to be whole by myself. There is no moving past this. There is only being in it and standing tall in it. Attempting and allowing myself to be in flow with the energy shaped around this new life and hopeful for the beauty and magic that unfolds in the unbecoming. Endings follow beginnings.

If I have learned anything about love, it is that we cannot possibly give ourselves completely to another until we have first chosen ourselves. Until we unlearn those patterns of behavior that have been holding us back from living authentically and have the courage to live with pure intention from our soul.

The most complicated and important relationship we will ever have is with ourselves. I am just now grasping this concept with the wonder of a child.

The best things are wild and free