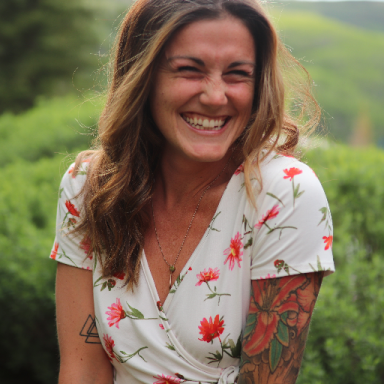 The average American buys 68 new items of clothing each year. After backpacking around Europe, South America, and the United States for a year, minimalism became a part of me. It was my lifestyle and my existence. I found comfort in my Marie Kondo need to remove the material items out of my life that wouldn’t fit on my back. There was a feeling of relief like I was peeling away the layers of my dead skin to make room for experiences rather than things. It felt as if I finally had a sense of control over something which I had sought out for a majority of my life.

Control. This concept of being able to manipulate the world around us, our own reality designed exactly how we want it to be. It’s a joke of the divine plan, one that God, the spirit, a greater energy of our own laughs at while we blindly believe control is something we have over anything.

My eating disorder finally came to a point where I needed intervention. I needed more help than what I was allowing myself to have. I had to lose control over the fact that I wanted control. Facing recovery meant facing something that has always been one of my greatest fears: gaining weight.

Throughout recovery, my weight dramatically fluctuated. I was down to a size zero, almost fitting into a large in children’s clothing, to the present moment where I am at a size I have yet to figure out. But one day, after settling down in downtown Denver, I realized that my minimalist lifestyle was another means I had to allow myself a loss of control. None of my pants fit me anymore. The irony in purging manifested itself in the form of gaining in more ways than one. I had to buy new pants.

It was a terrifying feeling, one I wasn’t sure I would be able to get through. But there were only so many days I could continue wearing the same pair of sweatpants over and over again. I made the executive decision that I would go to the store and buy a pair of pants. Just one, nothing crazy, so I could maintain some of the control over my minimalistic desires in life. But I still needed pants just like every other human on the planet. My therapist advised me to buy leggings or something stretchy. Jeans would not bode well for where I was in my recovery.

It was a Tuesday. Nothing special about the day, just an ordinary beginning of the week type of day. I had a break during lunch and decided to drive over to Ross in an attempt to find a new pair of pants. I got into my car and turned it on. I sat there on the hot, tan leather seats, listening to my Spotify Discover Weekly playlist for about twenty minutes. I finally turned the car off and walked back inside. I could always try again tomorrow.

Wednesday evening after work, I followed suit with the same plan fueled with even more determination. This time I made it into my car, turned it on, and drove into the parking lot of Ross. I sat there again, listening to music, pep talking myself through the process as I watched shoppers walk in and out of the store. I put the car in reverse and left the parking lot. One step closer. I could always try again tomorrow.

Thursday came and once again, I found myself back in the same parking lot. I contemplated driving away, but just to test myself, I wanted to see if I could take it one step further. I walked through the front doors and took a deep breath. I booked it to the juniors section wandering up and down the aisles of stretchy jeans and activewear. I stopped and looked at the numbers lining the clothing racks. I had no idea what size I was. I hadn’t weighed or measured myself in months as a part of my recovery process. I didn’t know where to start.

Do I grab a size zero from the last time I had to buy pants? Or was I 13? Somewhere in the middle? I could feel the panic and anxiety spreading throughout my body as my palms began to sweat and everything around me began to blur. I ran out of the store in a panic. I could only imagine that someone was watching me, assuming I stole something. I got back in my car, closed my eyes, took a deep breath in an effort to prevent the inevitable tears, and drove away. I could always try again tomorrow.

Friday came, which meant the weekend had finally arrived. This day was going to be different. This was going to be the day that I crushed it and made those pants my you-know-what. I made my way back into the car, into the parking lot, through the front doors, and found a pair of pants I liked. They were jeans, but stretchy enough to give the allusion that they were leggings. I grabbed five different sizes and headed into the fitting room. The woman asked me how many; I told her five. She put them on the rack and counted, realizing they were all the same thing. She gave me a look of confusion, handed me my number and I found my way into a fitting room with an awkward silent exchange between the two of us. All I could think about was the unfair judgement she was passing onto me. I found a room far away from the large mirrors at the end of the hall, making sure no one was around me.

I slipped my legs one at a time into each pair of pants, one after the other. Would zero fit me like it used to? Nope. I could barely get them past my calves. How about a size two? Barely made it past my thighs. Size eight. Too big. Size four. Too small. I looked at the pair of pants with the size six sticker taped along the right leg. This could be it. This could be the pair that I would finally be able to buy and move on from this epic ordeal.

I could feel a slight tightness around my waistline as I attempted to button them, even with stretchy fibers. Looking at myself in the mirror, I watched the skin around my midsection bulge slightly over the waistline. I could feel everything in me start sweating while the world once again began to spin. I frantically ripped the jeans from my body. Without putting anything back on the hangers, I quickly handed everything back to the woman and started to breath heavily out the front door. “You forgot your number!” The saleswoman yelled towards me. I couldn’t think straight. I ran back into my car and began to cry.

I was exhausted. I felt like I would never be able to even do something as simple as buying a pair of pants again. Who was I? Who was this person I had become? Was I using a minimalist lifestyle to mask the fact that I was actually hiding from another flaw? Was I using it as a means to ignore the root of the problem? I was sick. I was incapable. I was worthless. I was a failure.

Evening came and morning followed. The fifth day. Instead of using the seventh day for rest, I designated Saturday to be a “give yourself a break” day. I needed a minute to regroup. I wasn’t ready to give up. I wasn’t going to let something as ridiculous as a pair of pants stop me from living.

Sunday rolled around and I gave it one last shot. The pattern repeated itself. I got into the car, drove to the parking lot, walked through the front doors, and grabbed the various sizes of a different type of stretchy pants. This time I didn’t waste any extra emotional effort on a size zero or two. I went into the fitting and first put on the size four. Still not quite right, but I wasn’t feeling like I wanted to jump out of my skin. Next I put on the size six. This pair was different. I looked at myself in the mirror slowly, caressing my figure as I turned slightly in the mirror to see my body from every angle. This pair fit me perfectly. High waisted to cover up any part of me that I was too afraid to expose, the elasticity provided my body room to breathe, and most importantly, there was a flexibility in its comfort that let me know that I could gain or lose weight as I needed without the pair of pants judging me. Without judging myself.

It took almost an entire week for me to get through the arduous yet seemingly mundane process of buying a pair of pants. I share this story as food for thought for those that might not understand what it means for someone with mental illness to perform such remedial tasks. Something that seems completely normal, if not fun, to you can be extraordinarily difficult for someone else. We all have our stories and we all have our crosses to bear. But at the end of the day, my story ended the way I set it out to be. With a victory, a small and humbling victory.

5 Ways Surviving My Eating Disorder Made Me A Better Person

How Surviving An Eating Disorder Changed My Life