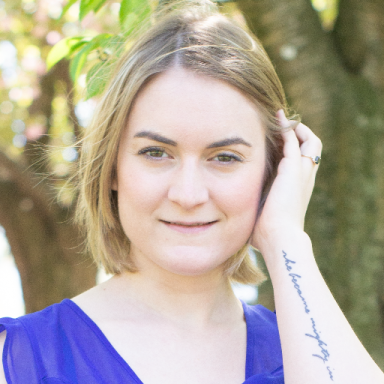 By Lauren D'Alessandro Updated May 18, 2020
chuttersnap

By Lauren D'Alessandro Updated May 18, 2020
chuttersnap

Last year, I missed my own birthday.

I actually went out to dinner with two close friends for my 31st birthday. But I wasn’t really there. I was experiencing my second manic-psychotic episode during that outing. The chemicals in my brain were roaring in imbalance. I might as well have been on drugs, because I had become an entirely different person.

As I mentioned, this was my second episode. My first had occurred just about 9 months prior. After the first occurrence, my doctors had written off my symptoms as a product of dehydration. I had been sick for about a week and half straight prior to having that breakdown, so I thought it was just a one-time fluke. It was this second birthday episode that got me diagnosed with bipolar.

I was in a lot of pain afterward, both mentally and emotionally. Life felt so unfair. Here I was with an incredibly difficult diagnosis. The fact that some people seemed to place the blame for these episodes on my shoulders was salt in an already gaping wound. Despite the fact that I did have some amazing friends who came through for me in a big way, it was difficult to take my focus off of the things I had lost. The silence of the people I had expected to stand by me was absolutely deafening.

I was left with an intense sense of loss. Besides losing friendships, I had lost, among other things, my sense of safety, my sense of security in my own body, and my sense of peace. My mind was reeling as it adjusted to the new medication. My heart was wracked with guilt wondering whether this was truly, as the doctors told me, not my fault.

It was during this time that God started to form something new and special in my life, though I didn’t know it yet. The month prior to my birthday episode, I had gone on a trip to New York City. I thought that I had reserved two nights at an Airbnb, but it turned out that I had only reserved one. So I was stuck in the city that day without a place to put my bags and without a plan. I remembered suddenly that I knew someone who lived nearby—someone that I had known a few years ago. After some deliberation, I decided to reach out to see if he could meet up. He responded to my invitation, and we ended up spending an exciting afternoon exploring the wax figures at Madame Tussaud’s.

We continued to talk on the phone occasionally after spending that day together. And then my second episode happened. Unlike the majority of the other people who had been in my life, this person made the decision to stick around. This decision really deeply moved me. I started to realize how caring this person was and slowly I started to wonder if we could be more than just friends.

The months that followed were both beautiful and difficult. I was coming to terms with my diagnosis, healing from the trauma of it all, and learning to forgive and move on. At the same time, I was feeling more supported and loved than I’d ever felt by someone I was really learning to care for. It felt like normalcy in the midst of all the chaos—like a light at the end of a very dark tunnel.

One of the first things I can remember sharing with my current therapist is that I needed God to show me in a fresh way that he was in control. When my episodes first happened, everything felt random and senseless. I knew that what I needed from God was a reminder of his providence.

God came through on this need in two big ways. The first was the way that he provided me with a job that allowed me to move back to New Jersey to be closer to my family (I needed the emotional support), and the second was the beautiful way that he brought me a relationship with someone who has seen me at my worst and yet still believed in the person that I truly am.

For me, one of the best details of this story is that if my first episode hadn’t lost me the friendships that it had, I probably never would have reached out that day in New York City. So in the end, it was one of the worst things in my life that brought me one of the best things. This relationship will always serve as a reminder to me that God really does work all things together for my good.