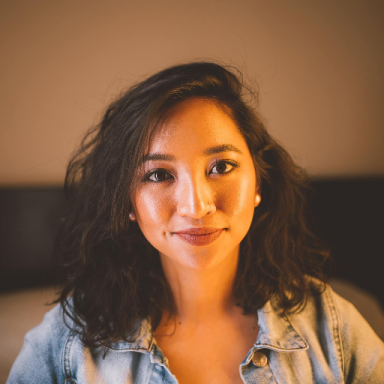 The quickest, albeit dumbest, way to becoming a total badass is by accidentally busting open a can of whoop-ass pointed directly at your face. However, I do not suggest this method.

But seriously though. Take a moment to think of some of your favorite superheroes. What made them heroes in the first place? Their origin stories often come from dark places of adversity. Peter Parker, aka Spider-Man? He decided to kick ass after the murder of his Uncle Ben. Bruce Wayne, aka Batman? He sought vengeance against criminals after witnessing the murders of both his parents. Your first generation immigrant mother? She raised you after years of culture shock and an inability to fit into foreign societal norms. Saitama, aka One Punch Man? Wait. Actually, he just did some basic bodyweight exercises and moderate cardio for a bit and somehow achieved superhuman strength, so he doesn’t really count. I just think he’s a total badass and wanted to include him in this lineup, but I digress.

A surefire way to becoming or experiencing the extraordinary is simply by transcending the ordinary. Sounds obvious, right? But often, this means undergoing intense physical or psychological trauma. Heroes power through some fucked up shit, and in doing so, the universe grants them the ability to tap into their full superhuman potential. By no means am I suggesting that you go out looking for something (or someone) to fuck you up. That, my friend, will only get you as far as maybe a cameo in the next Jackass movie. The real takeaway here is that greatness can sometimes be a product of adversity. By first feeling weak and powerless in the face of a challenge, humans fight back by mustering up great badassery for the next time some asshole stands in the way of upholding their ideals and values.

When have I experienced the most love in my life? After having my heart ripped out of my chest, thrown into the middle of Grand Central’s Main Concourse, and then watching it deflate after being trampled on by hundreds of thousands of commuters and tourists. Welp, there went my heart.

And what happened to the rest of my body? When have I felt the strongest? After slipping on ice and being torn to shreds by hundreds of ice skaters at Bryant Park just a few blocks away from where my heart was destroyed. Needless to say, this psychological trauma left me unrecognizable. Each time I caught a glance of my reflection in a passing subway train, I winced at the grotesque figure that blankly stared back at me.

Luckily, a world-renowned team of scientists who specialized in the reconstruction of the human self-image, aka friends and family, identified me as an ideal subject for what would be a groundbreaking experiment.

After assessing my condition following the accident, the team determined that they should first focus their efforts on mending my shattered heart. Since my heartbreak, I lacked proper blood circulation throughout the rest of my body, and therefore had lost most of my mental and motor functions. Heart specialist Dr. Friend Charming had spent much of his career studying the metaphorical human heart. For months following the accident, he worked directly with me to design a custom heart built just for me. The final product of his extensive research and meticulous design methodology now beats beneath my chest. Since my new heart is now so valuable to the science world, I guess you can say I have a treasure chest. But no pirate (or fuckboy) will ever steal this treasure again.

With the return of a healthy heart, blood finally coursed through my veins again and ushered in the reparatory orchestration of the rest of my body and mind. With each specialist working on a separate part of me, I became a modern-day Frankenstein’s monster, a scientific spectacle, which was really just a better version of my previous self.

Dr. Shares-Half-My-DNA replaced much of my genetic composition with that of a superhuman.

New York’s version of One Punch Man guided me through physical therapy that resulted in superhuman strength. It turns out bodyweight exercises and moderate cardio actually does do wonders for the body.

Dr. I-Told-You-So-But-I-Still-Love-You helped me harness a plethora of wisdom after the accident.

Dr. I-Never-Liked-Him-Anyway instilled a spidey-sense-like intuition that would protect me from future fuckboy fuckery.

Dr. You-Come-First-Babygirl implemented a new version of psychotherapy to further utilize my self-love muscle to its full capacity.

Dr. Picked-Me-Up-When-I-Sprained-an-Ankle taught me how to tap into compassion to assist myself and others.

Dr. Calm-the-Fuck-Down rounded out my superhero personality with a cool, calm, and collected demeanor that would serve me in even the most stressful situations.

And finally, Dr. Barnert Stinsonheimer’s hangover fixer elixir ensured that my body and mind would readily accept all the new improvements that the team had made.

From their combined love and intellectual talent, these specialists took someone who felt very broken and mended her into a superhero. But I think it’s clear that the true heroes of this story are actually the scientists, aka my friends and family.

Blinded by dangerous infatuation, I failed to heed their advice and dove headfirst into a situation that metaphorically mutilated me inside and out. Yet despite my stupidity and sheer stubbornness, they worked tirelessly to help mold me into the person I am today. And because of that, they are my real-life superheroes.

They make me feel like a fucking ripped badass.

When Your Heart Is Breaking, Remember This

How I Finally Conquered My Low Self-Esteem