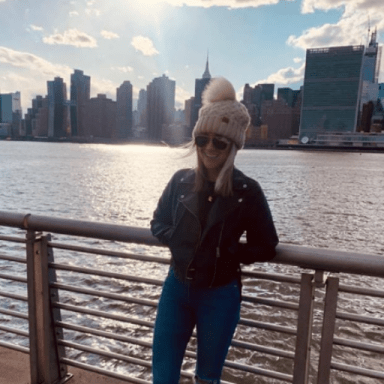 Life in New York is an array of flashing images that pass almost too sudden for us to digest. A series of last-minute opportunities, invitations, and unexpected turns that lead even the most solemn soul into new profound places.

That is our New York. Everyone is going somewhere; everyone has a destination. Whether it is work, a show, or an event, you need to pick up the pace or move out of the way because no one has the time and New York doesn’t wait for anybody.

The loud city soundtrack that we initially found overwhelming is an accustomed trait that only visitors hear, the sea of people is an unwelcome but expected part of our commute, blinding lights replaced stars and the air, polluted with dreams and determination.

But now, the only sound is that of silence, empty schedules, quiet roads, and parked cabs. New Yorkers with nothing but time—time to think, time to digest, and time to wonder.

The recluse neighbor is now a valued veteran with more stories than we have passport stamps; the graffiti on the corner is now street art that is elevated with the six o’clock shadow and the skyline that we take for granted and restores hope into hesitant minds with every sunset.

Parents whose aim was once to be home five minutes before bed now know if their kids are eating their greens. Corporate America has taken a step down, allowing for blue collar workers and front-line staff to return to the pedestal they once built.

So maybe Manhattan is sleeping. Maybe the allure that once attracted so many has been momentarily subdued, but there is one thing this city hasn’t lost—its people.

Those who came to this city seeking success and stayed because now they can never imagine living anywhere else. Those people who fought to survive in this city even when the odds were stacked against them and the people that when faced with this pandemic could have retreated to the safe haven of their childhood home but stayed in anticipation of overcrowded apartments, little freedom, and humid streets.

Because there will be a tomorrow when the mayhem stops, the weight lifts, and the city wakes. A day is coming where we will be encouraged to pet that dog again, hug a friend, greet new faces, sip overpriced rooftop cocktails and when that day comes, that news will be accompanied by the Manhattan skyline, a strong coffee, and decent tasting bagel, and we’ll take a sigh of relief, because our New York is back and that is what makes it all worthwhile.