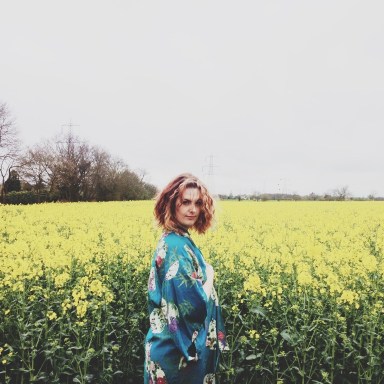 Cigarettes. Addictive little fuckers, aren’t they? Except, up until, oh, I don’t know, not very long ago at all, I was always adamant that I wasn’t addicted to smoking. Oh no, me? I can stop any time I want! I smoke because I ENJOY it! I WANT to smoke! I’m not controlled by my habit, NO WAY. I do it CONSCIOUSLY! WILLINGLY! I CAN STOP ANY TIME I WANT!

I used to say the same thing about casual sex, and it was only when I gave that up that I realised how detrimental it had been to my well being – harmless fun as I was determined to write it off as at the time. I was doing and dumping as a tool to protect myself. I’m pretty sure that right now I am using tobacco in the exact same way.

I know the theory of why I should stop, but I hate should-ing anything (it’s a personal development point and I blame it squarely on my father. HI DAD!) so traditionally I’ve given up giving up after a day, or a week, or in the case of earlier last year four whole months.

I read an obituary last week that the deceased man had written himself. He said, My regret is that I felt invincible when young and smoked cigarettes when I knew they were bad for me. Now, to make it worse, I have robbed my beloved Mary Jane of a decade or more of the two of us growing old together…  I feel such the “thief” now – for stealing so much from her…

I think that was what planted this final seed. The future father of my children, my unborn kids, the family I’ll make for myself – the things I have no real concept of right now but one day will exist – this is something I have to do for them.

Happy people can conceive of even more future happiness, and whereas once upon a time I thought I’d die a lonely spinster – and I mean, legitimately, that I’d always be an aunt but never a mother, or that nobody would ever really want to date me, and that I’d have to learn to rely only on myself until the day I died – now, I’m seeing that I am part of something bigger.

I’m learning that people care about me. And honestly, truly and really – I’m not exaggerating when I say this – I didn’t think I was worth caring all that much about until more recently than I’d like to admit.

And now I’m getting totally away from my point, which is basically that I started to think not about giving up smoking, but about why I smoke in the first place.

I had to sit all the parts of my personality down in a group meeting to figure out how the ABSOLUTE HECK I allowed more or less twelve years of smoking happen. And the answers aren’t pretty.

I smoke when I feel awkward at a party, as a reason to excuse myself instead of including myself.

I smoke when I’m feeling exposed, so that I can stare at my hands instead of my inhibitions.

I smoke because it puts a physical barrier between me and whomever I am with.

I smoke to feel like I am in control.

It is really, really, important to me that I deal with these things. I’ve already done so much searching in my soul to learn how to be better, how to be me, how to maybe feel more worthy.

Read this: I’m So Goddamn Sick Of Trying To Have My Single Girl Sh*t Together
Read this: 20 Signs You’re Doing Better Than You Think You Are
Read this: The Trouble With Sending Naked Pictures Of Yourself To A Tinder Match

Keep up with Laura Jane on Twitter and superlativelyrude.com