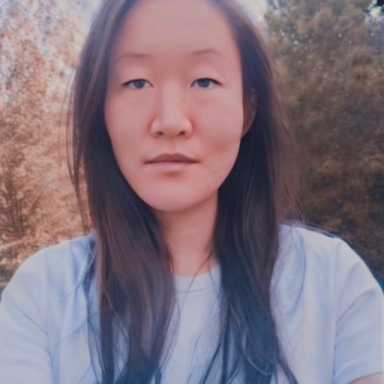 I know you’re anxious, afraid, and most of all uncertain of the future. But I want to let you know that you’re beautiful, strong, and more capable than you think you are. You have a clear sense of who you are and I want you to pursue your dreams, maybe not your wildest ones, but the achievable ones that balance practicality with passion. I know you’re realistic and skeptical enough not to expect fame and fortune, but at the same time, you also have the willingness to fight for a life that people around you say you can’t have: living in a balanced way while doing work that actually means something to you and has the potential to change others’ lives. You’re meant for a creative and entrepreneurial path, and I don’t need to remind you that it’s a tough road ahead. You know how brutally competitive the world is (thanks to your upbringing). But you’re bright, resourceful, and relentless. You can create your way out of any obstacle, even if the end doesn’t turn out exactly like what you expected. It’ll be good either way.

I want you to know that the path to becoming a workaholic drone isn’t the right path for you. It honestly would save me a lot of heartache and stress if you went after what you wanted and did it in a smart and marketable way without sacrificing your core values.

I know you’re in high school, but the real world is closer than you think. You’re worried about college and I can tell you’re not excited about what you’re going to study. You’re dreading it.

But I’m here to tell you that you absolutely must allow yourself to study something you love but also work hard as hell for it (I can guarantee that it won’t be easy, but it’ll be so much more worthwhile than what I did). Don’t be afraid to serve coffees for extra cash, pick up two other odd jobs, and be involved in the writing community as much as you can. Graduate a year earlier, connect with people you admire, and apply for the job of your dreams. Maybe it won’t be at a company you know of yet and it probably won’t be in a big city, but at the very least, do something that doesn’t fill you with dread or makes you think you’re an abysmal failure. I know you don’t hate science and you’re quite smart at it, but don’t lie to me and say that you want to end up working for a large tech corporation for 40 years alongside tech bros, filling your schedule to the brim with things that you honestly don’t give a crap about. Because you’re meant for something more. You deeply desire a simpler but more creative life. I get that. And I want you to fight for it with every ounce of strength, vigor, and passion within you. And screw those who say that passion is useless and childish. It isn’t. On its own, it’s unsustainable, but it’s still a source of life for you. Find a way to merge passion with something that the world needs.

Most of all, take control and never back down from the fight to express yourself and tell stories that shed light on who we are and where we’re headed. You’re fascinated by the human condition and as a voracious reader with an eclectic taste, you love the ancient as much as the futuristic, the soothing as much as the horrifying, and the analytical as much as the emotional. You have a different perspective and don’t be afraid to embrace that.

You’re more in touch with the indigo child within you than I am now. And that’s not a burden, that’s a gift.

To this day, you’re still a huge inspiration to me. You’ve built a foundation for me, but sadly, all I did was allow it to be crushed by fears and the incessant pressure to prove myself worthy of a life that I didn’t even want in the first place – the life of someone who allowed the future to be completely taken from her hands.

I’m sorry for letting your castle rot and for doubting how powerful you can be. I’m sorry for abandoning it like a coward and for staying small and feeling ashamed of you. But honestly, I’m the one who’s ashamed and regretful because after you died, I just wasn’t the same.

You have a razor-sharp mind and you’re quick with numbers, but you need to embrace your most vulnerable and emotional side that’s full of vibrant colors because you don’t see the world as black and white. Deep down, you don’t view life as a quest just to find “the right answer” (but I know that’s only how you were trained to think). You’ve felt things deeply and intensely, and you can turn that into art. I’ve seen you do that. And it’s so fucking powerful.

So keep going. Keep creating and never stop sharing your words, both the words that you put on the page and the words you sing out loud. Explore what makes you feel alive, but don’t forget to be smart as hell about it and find a way to present the best version of yourself to the world. You still have room to grow and become better, but you’re already off to a great start.

You have the future in your hands.

It really is yours.