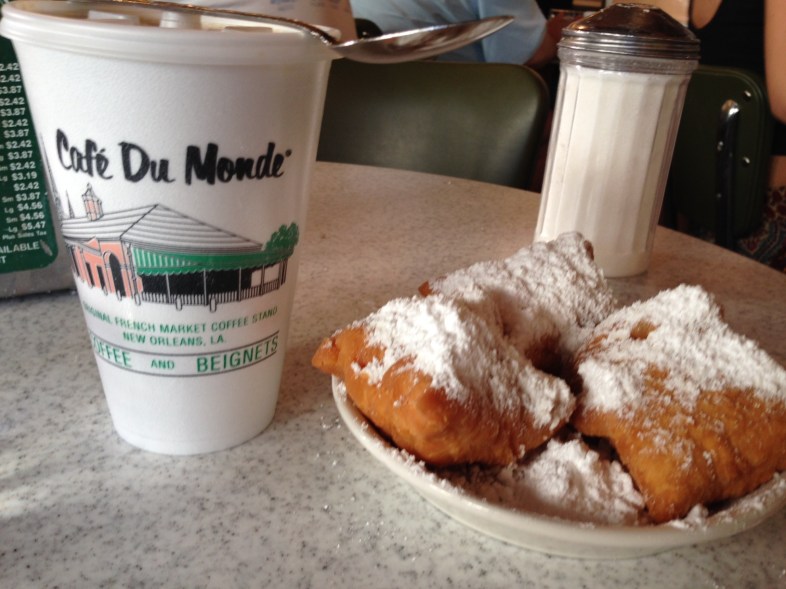 I’ve forever been fascinated with the time of day when night becomes morning — that shaded-in portion of the venn diagram where you’ve got the perpetual restlessness of nocturnal creatures overlapping with the blunt ambition of the Sunrise People; when the bartenders, chefs, and soon-to-be-divorced alcoholics linger amidst the 6am spin class go-getters. I like how you see the intense looks of judgement on both sides, and how each team is convinced that the other circadian rhythm is making a tragic mistake…that they’re doing life entirely wrong, and will probably never truly see the light (or dark).

Tennessee Williams has this famous quote about what he thinks of various American cities. Says Williams, “America has only three cities: New York, San Francisco, and New Orleans. Everywhere else is just Cleveland.” Obviously I have no idea what that means, but I like to think that these are some of the few places in America where night becomes morning in a sort of seamless, non-contrived fashion. New Orleans, for example, seems to have a late night/early morning energy that’s hard to rival — notoriously intoxicating on the alcohol side of things, but arguably equally intoxicating on the 7am coffee-waft front.

1. I hate myself for quoting two famous authors in the span of two paragraphs (this is a listicle, not literature), but there’s this quote in the Great Gatsby, “And I like large parties. They’re so intimate. At small parties there isn’t any privacy.” Cafe Du Monde is the restaurant version of that. Tables are pretty much on top of each other, but there’s so much action that it wasn’t weird that I was sitting alone.

In a forcedly metaphorical way, everyone was sitting alone — taking in the scenery, individually contemplating everything from their last failed relationship to how this place preserves its authenticity while still managing to be a huge tourist destination.

2. Particularly when visiting an old-timey place, reading the news on your phone is a little sad and pathetic. There was only one other solo diner in the entire place, who wasn’t a dum-dum like me and had brought a newspaper. I resorted to reading news on my phone while waiting for my beignets– which, admittedly, partially watered down the experience.

3. On a related, slightly more pleasant note, I noticed people were actually really good at not using their phones at Cafe Du Monde. People would walk in and take pictures — and then later, take pictures of their beignets — but I noticed that across the board, the phone usage in between these two stages was minimal. Comparing this to the diner I was at two weeks ago — in which I once looked around and saw that every single table featured people on their phones — maybe it makes sense for meals to have designated phone-use junctures.

4. I went on the morning of St. Patricks Day, so everyone was wearing green. Part of me thought this was an anomaly, but then I realized that in New Orleans, there’s probably an anomaly every day. That, in my opinion, is what really makes something a city — there’s always something huge happening, but that huge thing is kind of a non-factor.

5. There’s been this raging debate in my family for years regarding doughnuts — are they a dessert, or are they a breakfast? By extension, is the beignet — arguably the supreme overlord of all doughnuts — better as 3am drunk food, or as 7:30 am day-starter?

While I personally think the answer boils down to a matter of personal preference (some see white and gold, others see black and blue, others see a cliff that might be high enough to jump off of), I also realized that having to decide feels like a very silly proposition. I’m not sure if the pressure to make this ultimate final choice is a product of some sort of larger American value system, but in New Orleans, it felt like there was no need to ever have to make that decision; why would you ever choose one or the other, when both choices boast their own unique merits? Eating doughnuts as dessert is one experience, and eating them for breakfast is another. There’s no real need to competitively compare the two.

6. When I arrived at Cafe Du Monde at around 8:17, the place was pretty full. When I left at 9:02, there was already a considerable line forming. There was also a band in full swing, entertaining the prospective customers in an admirably “business as usual” type manner. This was clearly a New Orleans hustle — an essence that a regular wouldn’t bother to stop one second for, but one that’s clearly unique to a very small portion of the country.

Again, it’s impossible and unfair to sum up an entire city based on one small experience from one individual — particularly a city as complex as New Orleans, where the more touristy sections of the French Quarter don’t exactly paint the bigger picture (particularly over the course of the last decade, as the city continues to rebuild from the devastation of Katrina). But as their 150+ years in operation clearly indicate, there will always be something to say about the ceaseless allure of a place like Cafe Du Monde — a place where night becomes morning, sunrise after sunrise.

This article is the third of a series of articles and videos, documenting a trip from New York to Austin. Check out the other articles here, and related videos here.

How To Explore New Orleans As A Millennial