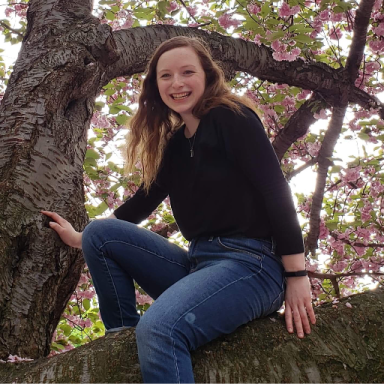 I have had an uncomfortable relationship with the way I look for a long time, but it wasn’t until recently, when I looked back at some old pictures of myself, that I realized how much body dysmorphia had structured my adolescence, turning my self-image into a funhouse mirror.

From the time I was about three or four years old, I remember feeling big. I sensed that my arms and legs bulged from my clothing and obstructed my peripheral vision, tainting playground fun with reminders of my size. At four years old I pulled my mother aside to talk to her about how fat I was, pulling up my oversized nightshirt to show my protruding childish belly.

By middle school, I felt absolutely huge. I wore almost exclusively black and straightened my wildly curly hair everyday just to make it take up less space. To make me take up less space. In sixth grade I refused to stand up and throw away trash from my packed lunch because someone might look at me. I ate quickly and only when I felt no one was paying attention. I felt constantly too big for whatever space or clothing or situation I was in, always exposed, always too much.

At the end of my freshman year of high school, while I fueled late night study sessions with over-sweetened coffee and took my first finals, I felt my stomach fold into itself. Bent over geometric equations, I cringed as my flesh touched.

Sophomore year I might as well have been made of marshmallows, because I felt puffy beyond belief. I ate sweets until I felt sick as I told myself, time after time, that I was done. That I needed to learn to control myself, to hold myself back in the only way that could pull me in, shrink me, and finally eliminate the feeling of inflatable limbs engulfing my real ones. Finally, finally, I started to shrink.

One summer later, I was at last convinced that my limbs were under my control. Muscles bulged from my thin legs, and I saw bones I’d only ever seen on health class skeletons. I counted my ribs and watched my nose sharpen and shoulder blades poke from under t-shirts. My chest sunk and my bras sagged. My arms never quite hit my standards, but the elbow was the widest part and the tops were simply biceps with skin stretched over them. I felt simultaneously powerful and incredibly weak, as I knew how precarious this starved-skinny body was. Any mention of food sent me into both salivation and tears. Before long, that Achilles heel, that goddamn survival mechanism intent on making me eat, was hit, and I was on my way back to marshmallowville through a heartbreaking world of unstoppable binges.

I fought my body as it tried desperately to come back to life, but in the end I could only watch helplessly as I got bigger and bigger, convinced I’d have to live on the treadmill to avoid becoming a human sphere now that my body was eager to store each calorie it could get. And as I watched, I looked at photos. I looked at myself onstage in my first high school musical, smiling in the glow of candles from my fifteenth birthday cake, standing carefully under the arm of my date to my first high school dance. My freshman year of cross country, my summer performances, my dance recital photos.

I’d been beautiful. Beautiful in this body that terrified me by its very existence. The one I had wanted to shrink before I wore a leotard in that first musical. The one that I thought everyone was watching as I took a bite of my cake. The one I’d dressed purposely in a long-sleeved dress and the one that I never felt belonged on the cross country team. The girl I was sure stood out as the biggest in her dance class fit right in among the others. Her supposedly endless thighs matched up with every other set that posed in brand new costumes. Don’t get me wrong, there were people smaller than me. I wasn’t teeny-tiny, but I looked like an average teenage girl. I had some extra substance on my thighs and arms and, despite my best efforts, my breasts were quite noticeable. But puberty hadn’t yet finished with me, and at fourteen and fifteen and sixteen it was still making me into a person. I stopped it because my arms were clouding my peripheral vision.

The weight of this realization hit me as hard as the weight on my body did when I started eating again. I knew the facts, the consequences of undereating and the inevitable regaining of the weight lost, along with some extra to make the primal parts of the brain feel safe. I knew that, having done this once, it would be harder for me to lose weight in the future, and even harder to keep it off. I was now certain to get bigger and bigger when I could have instead made peace with my natural self and be, if not skinny, skinnier.

That’s the still-disordered part of my brain talking. “I could be skinnier now if I hadn’t tried to be smaller.” The stronger and happier part of my brain has its own argument and says that I would have also had a healthier relationship with food. I wouldn’t have forgotten most of what I learned in tenth and eleventh grade. I wouldn’t have spent my time in high school hiding from food and ruining friendships. I might have made some friends my first year of college instead of eating oatmeal alone and doing homework on Saturday nights.

But I no longer have that choice. I have to live with the decision my sixteen-year-old self made, or that her brain or genetics or society made for her. I have to make peace again and again. I have to remind myself of the distortion effect of cameras when I look at photos and find myself pressing against my jaw bone to deflate my chipmunk cheeks. I have to recalibrate when I look down at my endless thighs. And when I stare in the mirror, unable to discern for the life of me what I look like, I have to remember all the things I’ve seen there before, and turn away.

I thought for a while that this experience was unique. I knew I wasn’t an enigma for seeing myself differently that others did, but I never realized just how many people look back at their younger selves and wonder how they could have possibly seen themselves as fat.

Recently, I was studying with a group of girls when the topic came up.

“I used to think I was so big, in like eighth and ninth grade, and now I see pictures and I’m like damn, I wish I looked like that now.”

“Yeah, I was actually a pretty thin kid looking back. Now is a different story, but I looked great.”

An image I saw online somewhere reads, “I wish I was as fat as I was the first time I thought I was fat.” I imagine now that most adults can relate. Whether body dysmorphia or media or simple lack of perspective is causing this, it’s leaving hoards of people feeling unsatisfied and uncomfortable in their bodies for their entire lives, despite looking back on perfectly attractive selves.

It’s terribly sad that anyone would feel so awful about the way they look at any time in their life, but I have to wonder: if even these bodies that fit the standard aren’t enjoyed by their inhabitants, what sort of ideal is that? Most need only look at their past selves to see their conceptions of beauty collapse under the weight of reality.

I think this common phenomenon can serve as a wake-up call to so many of us, no matter where in the game we are. If you find this ringing true for you, if you’re wishing you could go back and tell your past self that her body is fine, beautiful, better than she thinks, whatever, try this. Tell your present self. Tell him or her or them, “You are beautiful, so much more than you can see. Trust it, and live.” Future you will be grateful.

I have an extra vertebra in my spine.