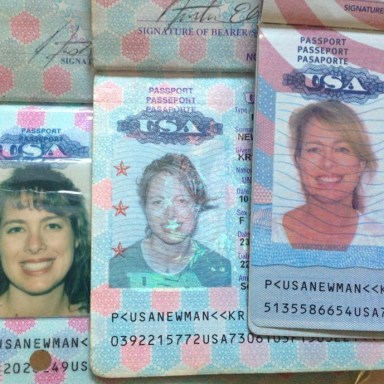 I am not a slut in the United States of America. I have rarely had a fewer- than-four-night stand in the Land of the Free. I don’t kiss married men or guys I work with, I don’t text people pictures of my genitalia, I don’t go home with boys I meet in bars before they have at least purchased me a couple of meals, I’ve never shown my boobs for beads. I do not sleep with more than one person at a time, and, sometimes, no more than one per year. In America.

But I really love to travel.

Now, having sex with foreigners is not the only whorish thing I do: I also write sitcoms.

For the last fourteen years I’ve written for shows like That ’70s Show, How I Met Your Mother, Chuck, The Neighbors, and shows you’ve never heard of that nonetheless afford me two over-the-top lucky things: the money to buy plane tickets and the time off to travel. What this means about my life is that I spend about nine months a year in a room full of, mostly, poorly dressed men, telling dick jokes and overeating and, sometimes, sitting on the ﬂoor with Demi Moore, Ashton Kutcher, and a chimpanzee (before all three found the age difference insurmountable). In the writers’ room, we talk a million miles a minute, tearing each other apart for sport and, often, out of love. Sometimes someone makes me cry, and I pretend I’m doing a “bit” where I “run out of the room to cry” even though what I’m really doing is running out of the room to cry. If I’m lucky enough to be fully employed, I get about nine months of this and then a three month hiatus—unpaid time off from this weird non-corporate grind.

Throughout most of my twenties and thirties, in the hiatus months (or years) between shows, I spent between a few weeks and a few months a year traveling. When money was tight, I took road trips with a tent, and when it wasn’t, I got on a plane and went as far as I could, to places like China and New Zealand, Jordan and Brazil. To Tibet and Argentina and Australia and most of Europe. To Israel and Colombia and Russia and Iceland. In the beginning, I took these trips with girlfriends, but soon my girls started marrying boys, and then they started making new little girls and boys, and so then I started taking the trips alone. Some of these girls would eventually come back around after a divorce for a trip or two, but then leave me again when they got married for the second time before I’d managed to do it for the ﬁrst. (When I complained to my friend Hope that she had lapped me in the marriage department, she replied, “I’m not sure the goal is to do it as often as possible.” I love her.)

Anyway, everyone around me was engaged in a lot of engaging, marrying, and breeding while I remained resolutely terriﬁed of doing any of it. I did want to have a family someday…it was just that “someday” never seemed to feel like “today.” I wanted love, but I also wanted freedom and adventure, and those two desires fought like angry obese sumo wrestlers in the dojo of my soul. That wrestling match threatened to body-slam me into a veritable Bridget-Jonesian-sad-girl singlehood, which I was resolutely against, both personally and as an archetype. And so to ward that off, I kept moving.

I began to need my trips like other people need religion.

Pretty early on in my travel career I discovered two vital things. First, that I’m someone a little different on the road, and that vacation from being my home self feels like a great sleep after a long day. Second, that you can have both love and freedom when you fall in love with an exotic local in an exotic locale, since there is a return ticket next to the bed that you by law will eventually have to use. These sweet, sexy, epic little vacationships became part of my identity—I was The Girl with the Great International Romance Stories at dinner parties, and around the writers’ room table. And I began to need my trips like other people need religion.

But my mom will be pleased to hear that my addiction to sexy people in sexy places really grew out of a nonsexual obsession: I love to do the thing you’re supposed to do in the place you’re supposed to do it. That means always getting the specialty of the house. That means smoking cigarettes I don’t smoke at the perfect corner café for hours at a time in Paris, and stripping naked for group hot-tubbing with people you don’t want to see naked in Big Sur. It means riding short, fuzzy horses that will throw me onto the arctic tundra in Iceland, or getting beaten with hot, wet branches by old naked women in stiﬂing banyas in Moscow. When these moments happen, I get absurdly happy, like the kind of happy other people report experiencing during the birth of their children. And getting romanced by a Brazilian in Brazil, or a Cretan in Crete…this, to me, just happens to be the gold medal in the Do the Thing You’re Supposed to Do Olympics.

I love that I am but one of millions of single girls hitting the road by themselves these days. A hateful little ex-boyfriend once said that a house full of cats used to be the sign of a terminally single woman, but now it’s a house full of souvenirs acquired on foreign adventures. He said it derogatorily: Look at all of this tragic overcompensating in the form of tribal masks and rain sticks. But I say that plane tickets replacing cats might be the best evidence of women’s progress as a gender. I’m damn proud of us.

Also, since I have both a cat and a lot of foreign souvenirs, I broke up with that dude and went on a really great trip.

This is an excerpt from What I Was Doing While You Were Breeding by Kristin Newman.

The Truth Is, I Have No Idea If I’m Doing This Right