#SamDubose is currently trending. The man was murdered in cold blood in his car by a police officer in Cincinnati. There’s a body cam video – it’s why some people will believe us this time. But what about when there isn’t video? What ensues are often rationalizations, denial, mental gymnastics, and a, “…but they could have avoided dying if…” all in the name of “being rational.”

Whiteness – the construct – manifested in ideology, politics, and people, always positions itself as rational. Chattel slavery, colonization, Manifest Destiny, discrimination laws, and the legacies that these things leave behind in their institutions and culture, are the product of this rationale.

…We can do this all day.

People think that Black people fear the marching KKK and outright White Supremacist groups. No, I do not fear these – these have shown me what they are, and I know where to (never) meet them. Instead, who troubles me most is the perpetually silent White person, the ever-rationalizing White person, the condescending White person who often hides behind his or her Black friends while pretending to know more about Black people’s experiences than Black people.

Being Black is tiring everywhere you go – and I hail from one of the Blackest countries in the form of Nigeria. But there is no place on earth where one can be Black and exist in a space that was not at some point terrorized with the rationality of Whiteness. None.

Still, being Black in America, brings with it a special kind of exhaustion. Indeed, as Baldwin so aptly pointed out, “To be a Negro in this country and to be relatively conscious is to be in rage almost all the time.” 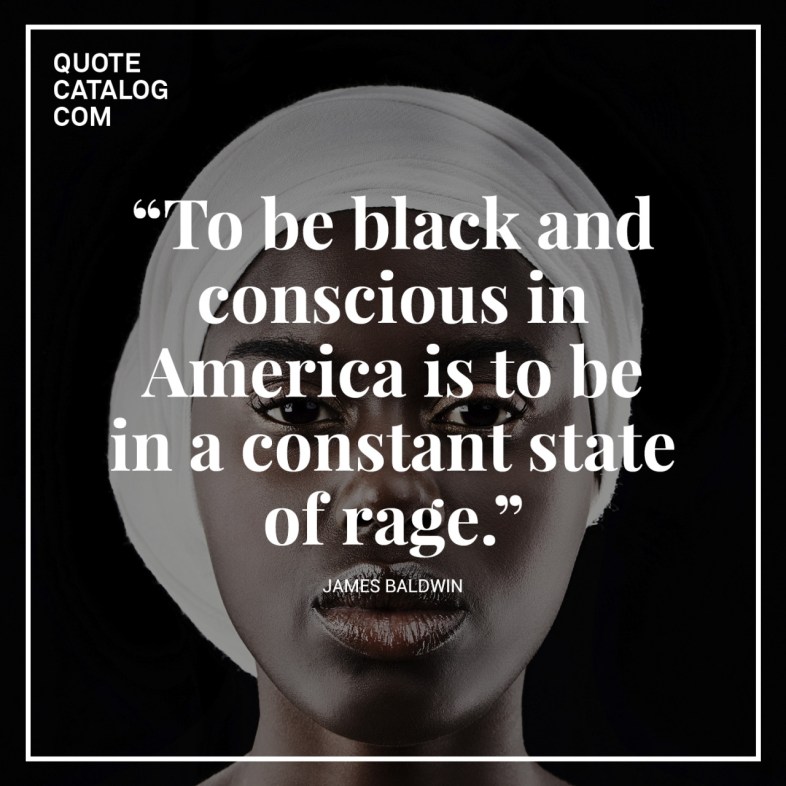 Rage can be a good thing. Malcolm X once lamented that people tend to seek change when they are angry. Martin Luther King Jr. who has been essentialized in White America’s history as the guy that sang, Kumbaya, and the country listened – and therefore the civil rights movement was successful. This portrait of MLK presented doesn’t often include a man who said:

I think America must see that riots do not develop out of thin air. Certain conditions continue to exist in our society which must be condemned as vigorously as we condemn riots. But in the final analysis, a riot is the language of the unheard. And what is it that America has failed to hear? It has failed to hear that the plight of the Negro poor has worsened over the last few years. It has failed to hear that the promises of freedom and justice have not been met. And it has failed to hear that large segments of white society are more concerned about tranquility and the status quo than about justice, equality, and humanity. And so in a real sense our nation’s summers of riots are caused by our nation’s winters of delay. And as long as America postpones justice, we stand in the position of having these recurrences of violence and riots over and over again. Social justice and progress are the absolute guarantors of riot prevention.

I must confess that over the past few years I have been gravely disappointed with the white moderate. I have almost reached the regrettable conclusion that the Negro’s great stumbling block in his stride toward freedom is not the White Citizen’s Counciler or the Ku Klux Klanner, but the white moderate, who is more devoted to “order” than to justice; who prefers a negative peace which is the absence of tension to a positive peace which is the presence of justice; who constantly says: “I agree with you in the goal you seek, but I cannot agree with your methods of direct action”; who paternalistically believes he can set the timetable for another man’s freedom; who lives by a mythical concept of time and who constantly advises the Negro to wait for a “more convenient season.”

Anger can be righteous and transformative. It is the reason why against the wishes of this very audience, some of the people who would (wrongly) call themselves my friends, and perhaps the general American historical and cultural amnesia (that is transported globally), that would rather pretend its sins only exist in the past than confront them, I continue to take an interest in race. It is my work, it is my scholarship, it is my activism.

And if you take issue with a Black person, and in this case a Black woman’s anger, might I suggest the following words from Audre Lorde:

For it is not the anger of Black women which is dripping down over this globe like a diseased liquid. It is not my anger that launches rockets, spends over sixty thousand dollars a second on missiles and other agents of war and death, slaughters children in cities, stockpiles nerve gas and chemical bombs, sodomizes our daughters and our earth. It is not the anger of Black women which corrodes into blind, dehumanizing power, bent upon the annihilation of us all unless we meet it with what we have, our power to examine and to redefine the terms upon which we will live and work; our power to envision and to reconstruct, anger by painful anger, stone upon heavy stone, a future of pollinating difference and the earth to support our choices.

My anger does not harm, it does not cause suffering, and it does not take life. And the truth is I would be disinterested in anger entirely if it was only useless or destructive. My anger provides me the will and strength to strive for a humanity in which Blackness is not made to suffer simply because of its existence.

But even then, it is a tragic but important realization that any of us can only do so much; Black people can only do so much. All the writing, protests, hashtags, etc. are necessary. But in all these things, the inevitable truth is that Black people and all People of Color cannot end racism. White people, White institutions, White politics, White ideology, and the ultimate destruction of White supremacy – which has changed its form and dynamic in every age it has existed – is what needs to change.

Now there are those who want to believe that, “racism will never end.” I do not live in such despair. I am a person of hope at the end of the day. Certainly, the world has a long way to go – inequalities exist at every turn, in every social identity. Intelligent beings have still not found a way to live together without trying to have power over another. This thought is overwhelming sometimes, and so is the world; but this is the only world we know.

Racism as we know it, ultimately, is not the function of God or nature. It is not an “accident” of history. It was created, and it can be destroyed. But its destruction is simply not only up to Black people and People of Color. Racism’s end, in its entirety, can only be seen through by White people who benefit from its system, even if they don’t choose to.

The silence, the denial, the deflection, the derailment, the protection of institutions that harm, creates Black pain, and ultimately leads to many an injustice of Black death. Racism literally kills.

But Black people cannot beg for freedom from anyone, or for the right to exist. By virtue of being human, by God, by nature, Black people are free, and have this right. No other right is more important than this, and any system that fails to acknowledge this right, or gets in the way of this right, is guilty of inhumanity.

Racism is inhumanity. And White people can change that.

A ‘Karen’ Horror Movie Starring Taryn Manning Is Coming Out

The Harsh Reality Of Being A Black Professional