Skip to content
Report This Article
What is the issue?
You can also read: The Making Of A Blackhawks Fan Pt. I: When A Black Girl Loves Hockey

A dynasty. That’s what we’re calling it. Three Stanley Cup victories in 2010, 2013, and 2015, and the Chicago team that has everyone talking, everyone proud, is its hockey team. From the perspective of so many people like me – Chicago transplants – who became Hockey fans during this period, we can only say, “Who would have thunk it?”

The city of Chicago is known for being a sports city – the Bulls, the Bears, the Sox, the Cubs, the Hawks, (and yes, even the Fire). But it seems too that we have been a suffering sports city in many ways. With each season in each sport comes this hope – this almost seemingly endless hope – often leading to disappointment at the end of each season. The famous Cubs fans’ reiterations, “Maybe next year,” seem to have applied to more than just them. It’s been over a century for the Cubs though so maybe we won’t render the other Chicago sports teams to such levels of sadness. (See: mediocrity)

But the Blackhawks, the Blackhawks, to witness this team in this city seems like the best of times. To be a fan, to be in the city, in such a time as this seems like a blessing, a once in a lifetime opportunity, and the kind of thing that was entirely unprecedented.

Speaking with Blackhawks fans, both young and old, if you had asked most of them if they would be witnessing a dynasty five years ago, the answer is always a resounding, “no.” Of course it’s different for the rest of us – those who only came to know of the Blackhawks by virtue of moving to this city within these five years. For us and for our frame of reference, the Blackhawks have always been good. History tells us otherwise but our experiences are what we know. And we know a lot of success.

Blackhawks fans were scrambling last week to get a seat to the Blackhawks rally. The tickets which were “FREE” but had to be retrieved online were only available to 60,000 people or less. The rally which had been held at Grant Part and on the street in the last two Stanley Cup wins respectively, was now being held at Soldier Field, the Bears stadium. Considering that 2 million people were said to have attend 2013’s parade and rally, it was going to be interesting to see how this would work. Most fans wanted to see both the rally and the parade. But between the chaos that would be the parade in the heart of downtown Chicago, and trying to get to the rally which was south of downtown, with predictably bad traffic, it seemed impossible.

And for many people it was impossible. Because I had been to the parade in 2013, my goal was to make it to the rally this year. Planning with friends to scope out the tickets online like hawks (pun absolutely intended), the feat of trying to “order” free tickets with probably hundreds of thousands of people trying at the same time, seemed daunting. But at least we were going to try. Luckily, one of my close friends got one. And even though they were nose bleed seats, it meant that we were going to be there – unlike a million or so people. We felt lucky. We were lucky.

Needless to say however, most people did not feel that Rahm Emanuel, the city’s mayor, had given Chicago the celebration, “worthy of a dynasty” that he had promised. People were pissed. And rightly so. Chicago politics is one thing – Chicago sports are another. And you don’t screw up the latter when you are in the former. 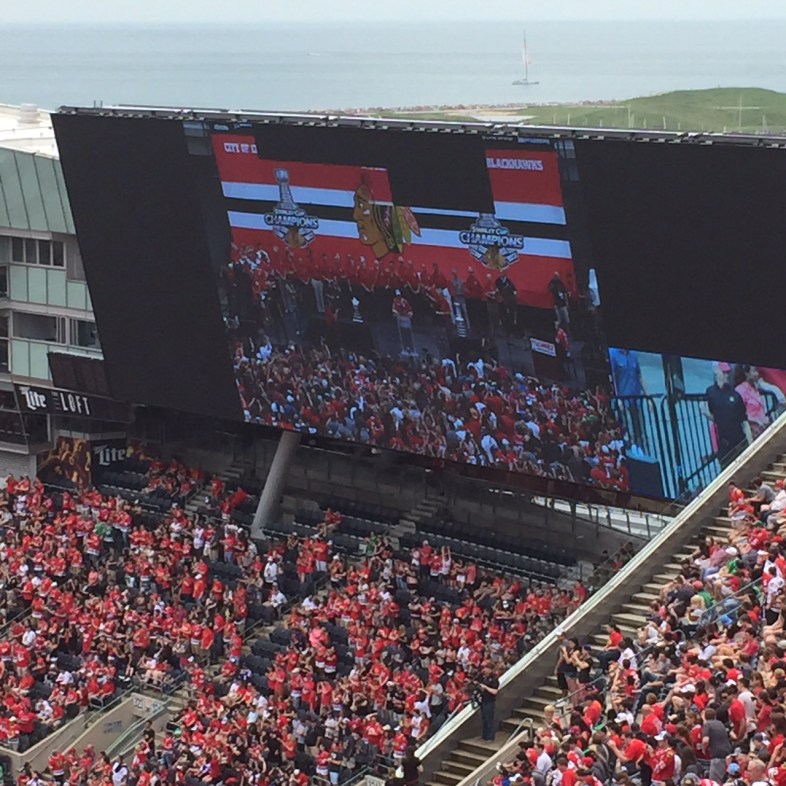 Being at the rally was something special. We took the L at 6:30 a.m. or so, so we would be there by 7:30 a.m. to make it for the event that was supposed to start at 11:00 a.m. And of course we weren’t the only ones. Tons of people had made the smart decision to go early. And like a crowd with ONE GOAL, we were there to celebrate with the Hawks, our Hawks.

The coaches, the players, the team all would get up and give their cheers and speeches. I would be lying if I said if I heard everything that was said by the players and coaches. Half the time, I couldn’t make out what they were saying at all. But the truth is I was just happy to be there. That was the sense in Chicago – we’re all just happy to be there. So many stood outside of the stadium with no chance of getting in. But that didn’t matter. The Hawks were worth it.

What does the Stanley Cup, what  the dynasty mean to Chicago? It’s hard to put in words. It means Chicago being seen by many who have always loved the sport and those who are new to it as a “true Hockey city.” It adds to the legacy of not only the Blackhawks but of the Chicago tradition of being proud of our sports teams, and expecting them to bring pride to the city. But this isn’t just sport, for Chicagoans, this is community. We’re the city that works, you know. And there’s nothing better than when a city that works has a reason to take some time to celebrate being a city that works and wins.

So maybe I’m just a transplant. Maybe I’m just some girl who accidentally fell in love with the Hawks. But I will also for a time say, “I was there during the Hawks Dynasty; I was there. Chicago was my home then and boy, was that a great moment in time.”

p.s. If you’re wondering how I got a picture of the Stanley Cup. Two years ago, I happened to be sitting at random bar when Mayers walked out with it. Let’s hope Lord Stanley and I will rendezvous again soon.

The Last Day At The Georgia Dome

11 Guaranteed Ways To Piss Off A Chicagoan