The next season of Bates Motel might not premiere until next spring but that doesn’t mean Norman Bates isn’t around to help creep out your fall season. After 20 years the first new Psycho book, Psycho: Sanitarium, is getting ready to hit bookshelves and the first excerpt from the book is available to read, courtesy of EW.

In the original Psycho novel, published in 1959 by Robert Bloch, it was followed up another 23 years later. We learned Norman Bates had went on a killing spree after escaping the mental institution he was spending time in. In Psycho:Sanitarium, author Chet Williamson looks at the questions the last Psycho novel raised and explains what Norman’s been up to in the past 20 years. Check out the cover of the book and read the bone-chilling excerpt below: 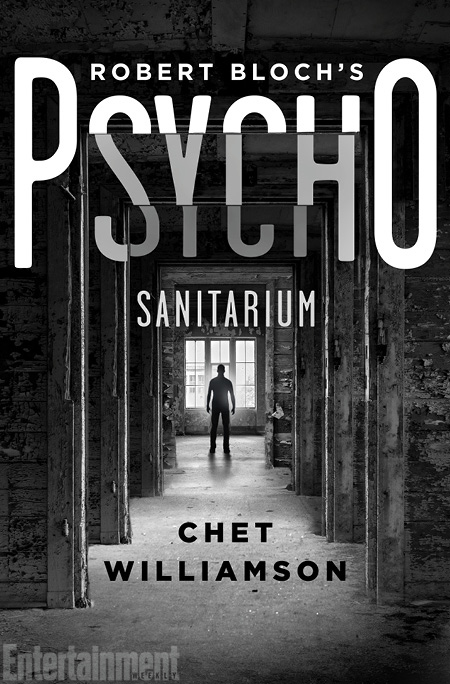 Nurse Marie was talking to Norman, but he tried not to listen to her. If he listened too closely or, even worse, if he tried to respond to her, to thank her for feeding him, or to tell her that the meat loaf was good or he liked the cake, Mother would get mad and yell at him. He hated it when she did that. It was too quiet in here, and there wasn’t anywhere else he could go to get away from her.

Nurse Marie put down the plastic spoon and picked up the paper napkin. She touched it to Norman’s mouth, dabbed either side of it, and then wiped it. It felt good when she did that, when he felt her fingers through the thin paper trace across his lips as though he was kissing them, and when they were just under his nose he inhaled, trying to get the smell of her flesh into his nostrils. He did it again now, and there was an audible sniff which he hoped Nurse Marie hadn’t noticed, and then…

Norman froze. He stopped chewing and listened, fearing the worst.

“Norman?” he heard Nurse Marie say. “Is anything wrong?”

In spite of himself, he was about to answer, to open his mouth full of carrots and tell her, even though he knew that would be a big mistake. But it was already too late.

Mother. She was angry. She knew that Nurse Marie’s wiping of his lips had made him have bad thoughts. She knew. Mother knew everything.

Is anything wrong, Norman? Why don’t you tell the bitch? Tell her how much you like having her touch you! Maybe you could dribble in your lap and see if she would wipe it up! You’d like that, wouldn’t you, you dirty boy!

Then you stop thinking that way, Norman. It was those kinds of thoughts that made you kill that other girl, wasn’t it? You couldn’t have her in your dirty way, so you had to kill her, isn’t that right?

No, Mother! You killed her, not me!

You wouldn’t have done it if you hadn’t wanted to, Norman. Don’t you blame me.

“Norman?” he heard Nurse Marie ask again. “Aren’t you hungry anymore? Have you had enough to eat?”

Norman didn’t answer, but he started to chew again. He chewed the carrots, and the crunching sound was loud inside his head, loud enough to drown out Mother, and he swallowed.

Crunch away, but I know what you’re thinking, boy. I always know.

It was only a whisper in his head, but he heard it clearly. He was finished eating now. He thought Nurse Marie had said something about chocolate cake, and he liked chocolate cake, but he didn’t want Mother to get mad again.

Was that her again?

Norman, do you want…

Nurse Marie. Oh god, yes, Nurse Marie. And he did want some cake, in spite of Mother. He opened his mouth, hoping that Mother wouldn’t speak aloud out of it.

SNEAK PEEK: Listen To The First Chapter Of My New Novel ‘Forget Her’