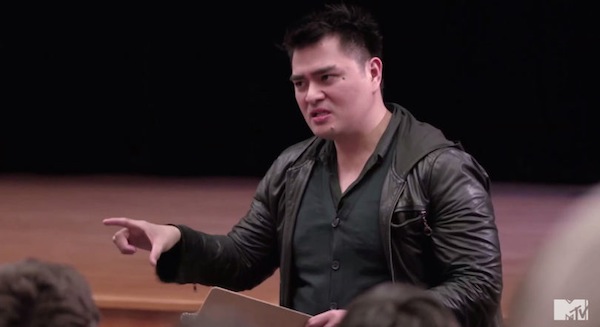 The documentary, White People, premiering on MTV tonight, aims to explore the way young, white Americans think about race and white privilege. The film directed by Jose Antonio Vargas, a Pulitzer Prize winning journalist who previously made the film Documented about his experience as an undocumented immigrant, takes Vargas out of the spotlight and centers on five white young people from varying social, economic, and educational backgrounds around the U.S who are presented with the question: what does it mean to be white?

When the trailer for White People made the rounds on the internet earlier this month, it was initially met with scorn. Do we really need white people talking about how hard it is to be white? Vargas says yes, we do. When he began this project in January he wanted to look at the way white people think about whiteness, but not just any white people, he wanted to talk to young millennials.

“All the studies show millennials are the most progressive in the country. We see expansion in women’s rights, LGBT rights. At the same time, statistics say nearly 50% white millennials feel like victims of racism, yet 4 out of 5 people feel uncomfortable talking about race. So many millennials want to be colorblind and they don’t want to see race at all. The idea we’re all created equal is a positive thing but being color blind, being unable to see race, means not seeing the reality of how we’re all treated,” he said.

Vargas wanted to open up the dialogue about race with white millennials, listen to why they feel like victims of racism, and talk to them about the reality of race in this country. He knew the conversations would get uncomfortable and he welcomed any potentially outrageous thing his interview subjects might say.

“We are so often unable to have those conversations about race. That’s why I thought about this generation for the film. I see the possibility of real progress but we can’t get there if we talk in code with words like ‘marginalized’ or ‘minority’ and not insist on real, honest, uncomfortable, difficult conversations.”

As a queer, undocumented immigrant born in the Philippines and raised in the Bay Area with degrees in political science and black studies, it may seem surprising Vargas is interested in talking to white people about their experience with race, but it’s those conversations about whiteness he says he’s been obsessed with since he arrived in the Los Angeles International Airport at 12-years-old.

“When I got to this country when I was 12 we didn’t call people white or black, we called them Americans. As someone who is Filipino, I thought, ‘What is this white and black thing?’ The conversation about race has been largely defined by that binary, but we have moved on from white and black. We have multicultural people now.”

Vargas says as white people become the minority in this country, it’s important now more than ever to include them in conversations about race.

“People of color, blacks, Asians always have to be dissected and explored. We always hear ‘being black in America’ or ‘being Asian in America.’  But white Americans, what about them?” It’s the question that fueled his quest to travel around U.S. in search of answers.

One of the things that surprised Vargas while making this film was discovering many white people don’t have a sense of racial identity.

“As an undocumented immigrant I always get asked where I came from. It was interesting to ask that question of white people  I was surprised that a vast majority didn’t really know where they come from. ‘I’m American!’ ‘I’m White!’ Okay. White is not a country. Are you Irish? Are you Swedish? A lot of people didn’t know.”

In the film we meet Samantha, Katy, Lucas, John and Dakota.

Dakota, a white gay Southerner, left his conservative small town to attend a historically black college. He talks about his experience of being a minority for the first time and brings his black friends from college and white friends from his hometown together for an uncomfortable discussion about race over dinner.

Katy, a straight-A student in Arizona believes she was racially discriminated against when applying for competitive scholarships to attend the university she had her heart set on – a common complaint from young white people Vargas investigates.

Lewis, a young white man in rural Washington state, teaches white privilege workshops on his college campus to broaden the minds of other white students. When his conservative-minded parents attend one of his workshops he hopes the experience will open their outlook.

Samantha, a high school teacher that works on a Native American reservation in South Dakota, explains what her experience has been like coming to terms with her white privilege in a community where she’s seen as the “other.”

Lastly, we meet John, born and raised in the historically Italian-American Brooklyn, New York, neighborhood of Bensonhurst. His family has been in Bensonhurst for decades and he discusses the experience of watching the area change over the years into a dominantly Asian neighborhood.

Vargas offers an open ear and a non-judgmental space for these young people to talk about their experiences – something he thinks is crucial if we want to build constructive conversations on race.

“This isn’t about making anyone feel bad,” he said. “In this country we are so politically correct, I wonder how many white people feel they’re worried about being racist. The resentment builds. I’d rather we talk about it and we examine it together. Silence is not acceptable.”

As a partnership between MTV’s Look Different campaign and Define American, Vargas’ nonprofit organization, White People is only a soft introduction into the work Vargas wants to do in constructing conversations about race and identity.

“My hope is that this film can move us to another level and create a space where actual constructive dialogue is possible. It’s nothing revolutionary. You ask, you listen, you put everything into context. I’ll probably create a couple more specials like this. There’s more to be had.”