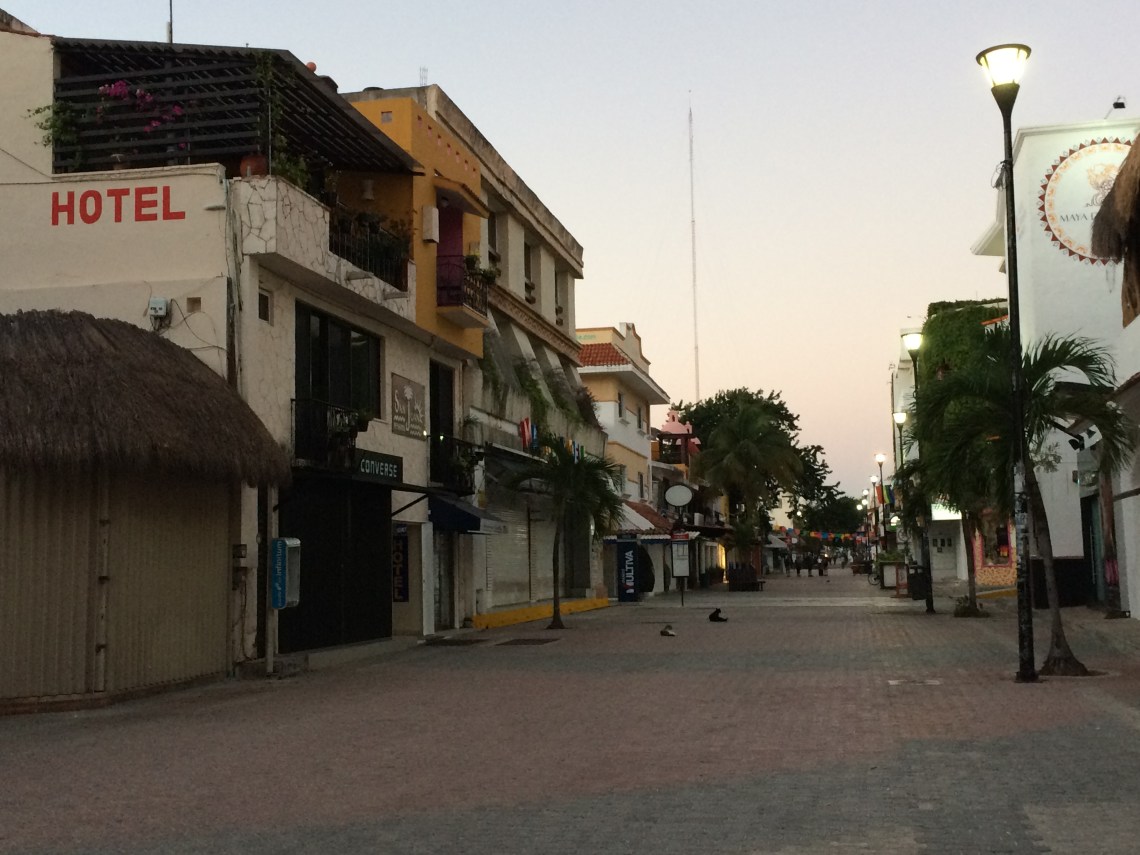 I snapped this photo a few weeks ago on my last day in Mexico. It was early morning and I was on my way to the bus station headed to the airport. 5th avenue, the most touristy street in Playa del Carmen, had been a street I both loathed and loved. I liked the convenience of coffee shops and trendy restaurants but hated the way it felt like an adult Disneyland at times. I didn’t spend much time there.

If you walked one block left from where this photo was taken you would find yourself at the ocean.

I wanted to go there, to the beach, one last time but I felt rushed. I had only gone to bed a few hours earlier and had that anxious feeling like I was probably forgetting something.

I took this photo to remind myself of the trip, of my last morning in Mexico, and because I had never seen anywhere in Playa del Carmen this quiet since I arrived. I loved how it was just me and a couple of stray cats experiencing the calm of the early morning.

I took the trip to celebrate my 30th birthday and I planned on waking up early on that day to watch the sunrise on the ocean. It seemed like a good way to start a new year, a new decade. I told a traveler my plans a few days before.

“No sunrise is beautiful enough to wake up that early for,” he told me. And although I nodded in agreement with him, I was slightly annoyed at his cynicism.

I enjoy early mornings. I like the slowness of it all (assuming you’re not in a rush to get to work). You brew your coffee, read the news, and have a few moments of peace with yourself before the rest of the world wakes up. It’s a similar kind of solitude as being alone in the darkness of the middle of the night but there’s something more hopeful about it all. I think 3 a.m. can breed different degrees of anxiety and melancholy if you let it.

Unfortunately, the sunrise on my birthday never happened. I mean, I’m sure it did, but I wasn’t there to see it. I went out salsa dancing the night before until early morning (but too early to catch the sunrise) and never made it out of bed until almost noon. So much for starting out a new decade in a ~zen~ way.

I don’t regret going salsa dancing that night or missing the sunrise that morning. No, I don’t regret any of that. I think sometimes we plan for things to go a certain way but other things happen, decisions are made, and everything turns out just fine in the end anyway. But I never saw the ocean my last morning in Mexico and that’s what I regret. I felt anxious and in such a rush to get to the airport, only to realize when I arrived I had an hour or more to kill.

It probably seems silly to feel nostalgic for a place and a moment that only happened a short time ago but that’s the way I can be. Sometimes I’ll feel nostalgic for something that took place only a couple days earlier because I know I’ll never get back to that place again – who I was in the moment, the atmosphere of the night with those particular people on that particular evening. There are tons of other snapshots I could share of places I both love and miss but for right now, this is the place I long to go back to.

Where are the places from your past – either recently or long ago – that you think back on and wish you could return to, even if just for a moment? Why do those moments stick out to you?  Longing for the past is a bittersweet experience to indulge in and it can make your soul ache if you get too lost in the emotion, but the process of reflection can be so essential for self-discovery.

If I could go back, I would turn left. I would go to the beach and sit on the white sand and breathe in the ocean air one last time. I would tell the anxious voice in my head to chill out and that nothing bad will happen if I take this moment for myself. I would remind myself it’s okay to enjoy this.

Maybe that’s something we all need to give ourselves – the permission to find enjoyment in small joys and to free ourselves of the burdens of life for just a second, because often the denial of living in the moment leads to longing for something later we could have had but failed to take.