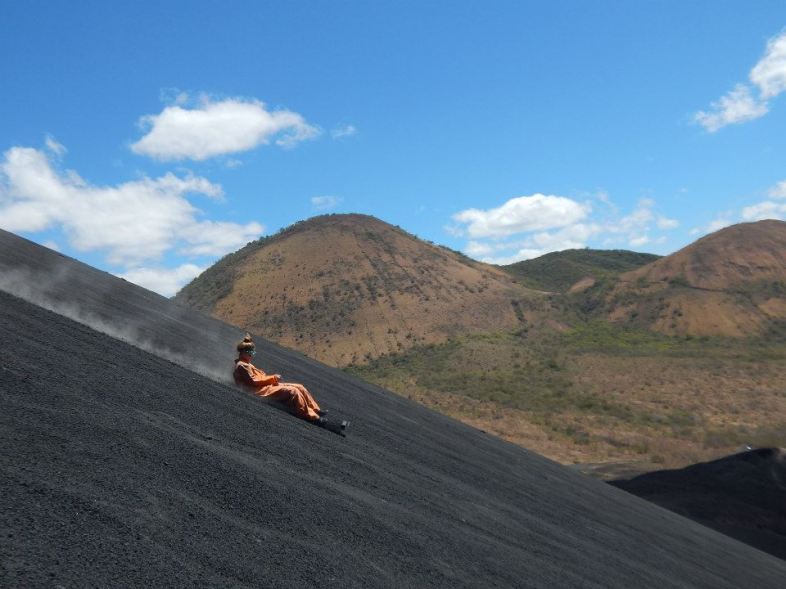 A piece of plywood. A pair of safety goggles. An orange jumpsuit. An adventurous spirit. These four things were all I needed to go volcano boarding in Leon, Nicaragua – the only place in the world you can participate in the extreme adventure sport.

Volcano boarding was born in 2006 when Darryn Webb, a tour guide from Australia, had a plan. He wanted to find a suitable material for coasting down the side of the soot covered Cerro Negro – the youngest active volcano in Central America. He tried everything – a fridge, a mattress, a picnic table, even his front door. Nothing worked until he tried a piece of plywood. 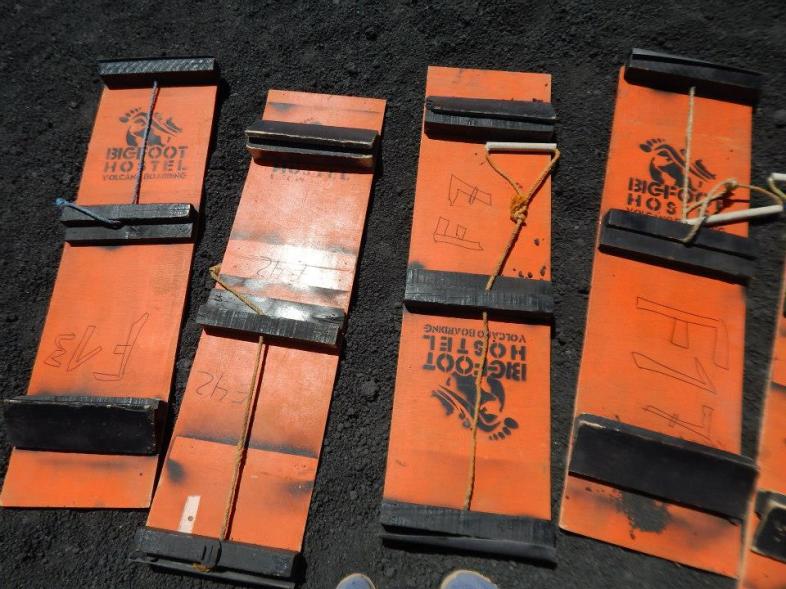 Almost a decade later and I find myself in a group of about 15 ragtag kids from all around the world listening to our guide Tom, a 20-something dude from England, tell Daryn’s ambitious tale. Before we begin the hike up the side of the volcano we take a moment for a group photo. 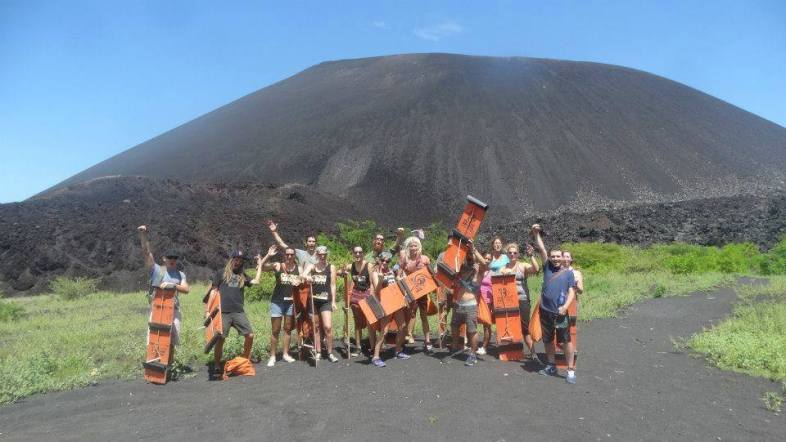 It’s early October, a time of year where back home in Michigan the air would be coated with a slight chill and the leaves would have already changed to bright orange and yellows. Here in Leon, though, it’s easily 90 degrees with the sun beating down on our backs.

20 minutes later and we haven’t made it even half way up yet. Chanelle, a traveler from South Africa I met three days ago, is in front of me and she slips on the loose rock as we make our way up. The terrain is becoming increasingly more difficult the steeper we climb. 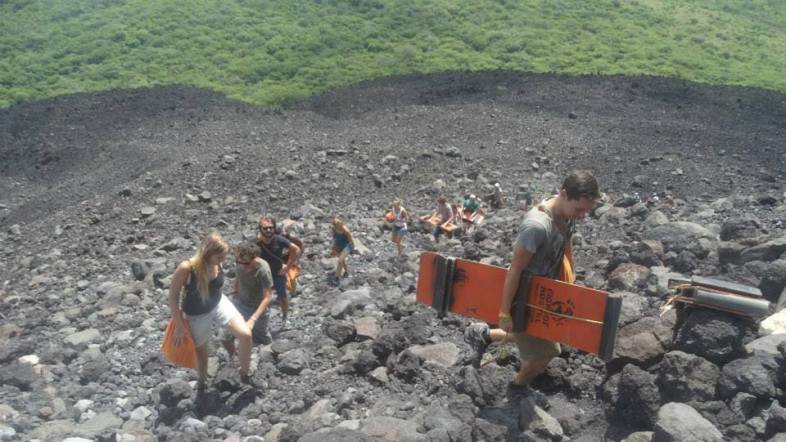 Beneath our feet we see steam rising from the ground, and every so often we hear the earth hiss, reminding us we aren’t on just any hike, but we are climbing a live volcano.

The Cerro Negro, also known as The Black Hill, is one of the most active volcanoes in Central America. The last time it erupted was over 10 years ago, not too long before volcano boarding became a sport. Our guide jokingly assures us we’re “probably fine” but also points out the volcano is overdue for an eruption.

After an hour’s hike we reach the top and look over the vast landscape around us. 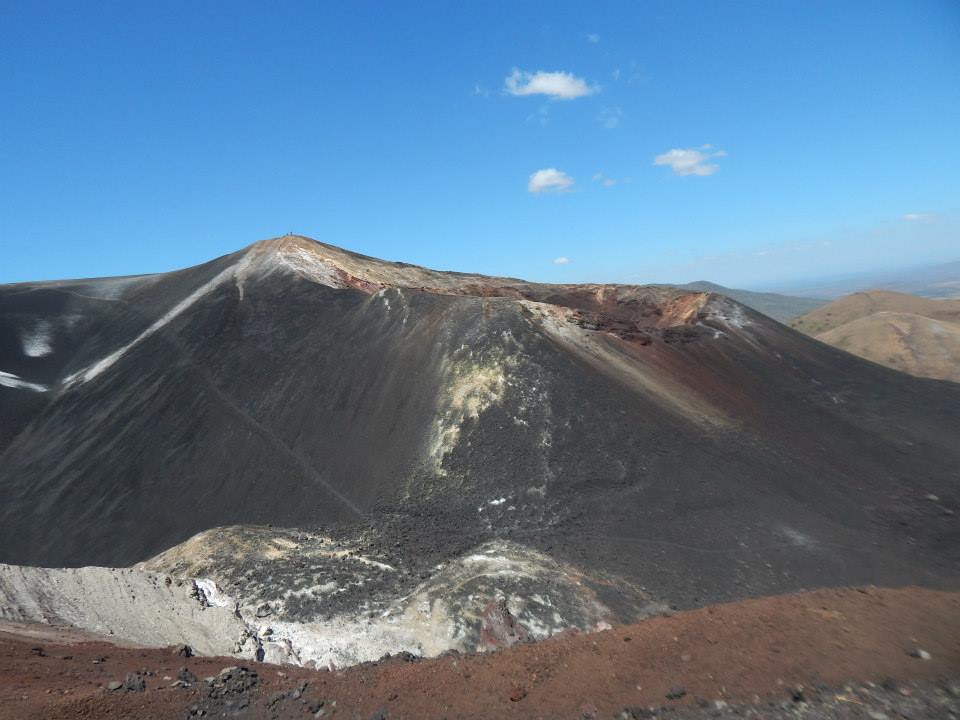 Tom tells us to put our hands to the ground beneath us. It’s here where we can really feel the heat of the volcano brewing underneath. He then instructs us to put our orange jumpsuits and goggles on and gives us the basic instructions of volcano boarding.

A lot of people want to stand up on the board, mimicking snowboarding, but that method sucks, Tom says. You won’t get any speed that way. And gaining speed is one of the most adrenaline pumping parts of the whole experience.

Basically, volcano boarding is essentially like sledding. The difference? You can easily clock up to 95 kilometers per hour on your board. He tells us how to position ourselves on the board for the fastest way down, how to brake with our feet and how to prepare for a landing when we can tell we’re going to flip off our boards.

He asks us who wants to go first and we all look at each other nervously. An hour ago we were all pumped up to do this, but now that we’re at the top it’s looking like a long way to the bottom. Eventually, after a few awkward moments, someone volunteers. We watch them begin the descent, spilling from their board moments later. 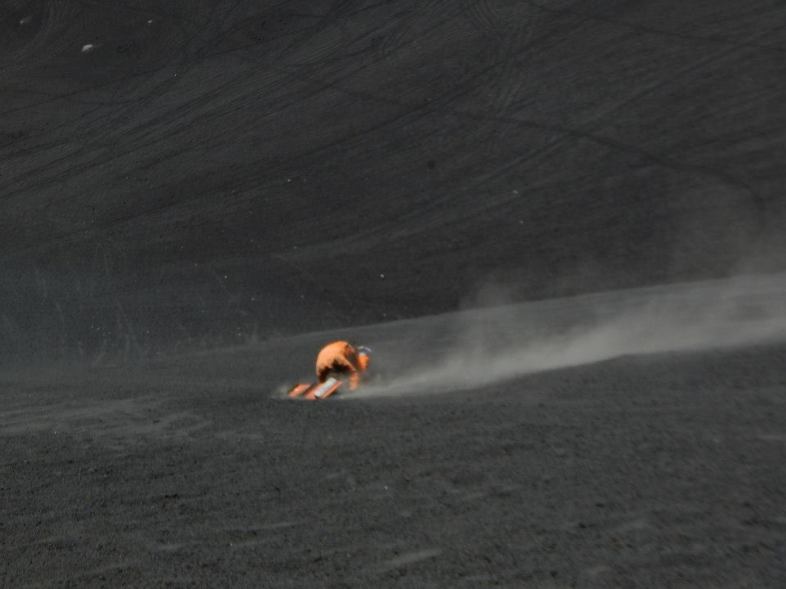 “Daaaamn,” a guy from Brazil says. “That looked rough.” We wait to hear the guy’s alright before sending down the next person. A handful of people later and I’m next.

I sit on my board and wait for someone to give me a push. The initial experience is slow and takes a minute to get going. For a few seconds I’m moving at a glacial pace and wondering what the big fuss is over volcano boarding. This is the second most dangerous tourist activity in the world? Yeah, okay.

Soon enough I gain speed. Then more speed. Then more. And pretty soon I’m filled with a mix of terror and excitement. Two conflicting thoughts are running through my head: 1. This is fucking awesome. 2. Oh God, I hope I don’t die.

I start freaking out a bit. Scared of the speed I’ve gained, I push my heels into the volcano’s surface, attempting to brake. Immediately, I get the aching suspicion I’m going to crash. Sure enough, I do. I fly off my board and completely forget Tom’s advice about how to prepare for this. I just hope my board doesn’t hit me as we’re both somersaulting down the volcano. Luckily, it doesn’t. I land flat on my back.

It takes me a minute to take everything in. I think about how warm the volcano feels underneath me. I lay there for a moment collecting my thoughts before realizing my group is yelling at me, asking me to wave my hand if I’m okay. I wave at them, stand up and collect my board before finishing the descent.

When I make it to the bottom Chanelle laughs at me. “You’re covered in ash!” I touch my face and neck and realize I am, indeed, covered with soot.

One by one everyone makes it down, but not without a few bumps and scrapes along the way. Emma, a girl from Australia, wins the day’s best speed at 77 kph. We gather together at the base of The Black Hill requesting the cookies and beer Tom promised us earlier for a long afternoon on the volcano.

Exhilarated, dirty and exhausted we cheers each other with our cans of Toña.

Why I’ve Stopped Trying To Create The Life I Want

What I’ve Learned In My Search Of Impacting Others