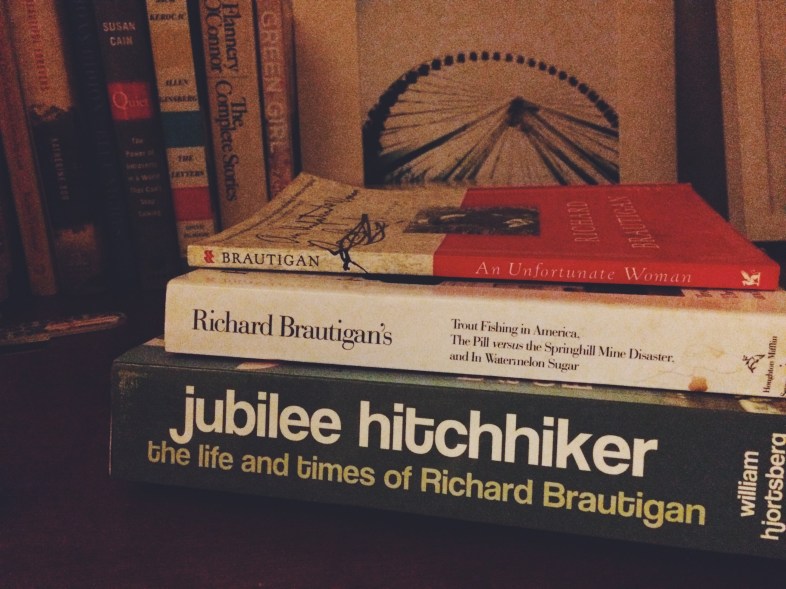 I was in a used bookstore in South Haven, Michigan the first time I picked up a book by Richard Brautigan. I bought In Watermelon Sugar for 50 cents and read the yellow stained pages while I sat on the pier overlooking Lake Michigan. Isn’t it funny how memory works? I can’t remember basic items when I’m out grocery shopping but I can always remember every book I’ve bought or have been given right down to the location and the mood I was in that day. So, I bought the small little book and I instantly became enthralled with Brautigan’s writing style. I loved his sense of humor and the strange, interesting way he looked at the world. I’ve been re-reading some of my favorite poems and chapters from his books over the holidays and thought I’d share with you a few memorable bits I think you’ll like.

I will be very careful the next time I fall in love, she told herself. Also, she had made a promise to herself that she intended on keeping. She was never going to go out with another writer: no matter how charming, sensitive, inventive or fun they could be. They weren’t worth it in the long run. They were emotionally too expensive and the upkeep was complicated. They were like having a vacuum cleaner around the house that broke all the time and only Einstein could fix it. She wanted her next lover to be a broom.

It’s so nice
to wake up in the morning
all alone
and not have to tell somebody
you love them
when you don’t love them
any more.

I don’t know what it is,
but I distrust myself
when I start to like a girl
a lot.

It makes me nervous.
I don’t say the right things
or perhaps I start
to examine,
evaluate
compute
what I am saying.

If I say, “Do you think it’s going to rain?”
and she says, “I don’t know,”
I start thinking: Does she really like me?

In other words
I get a little creepy.

A friend of mine once said,
“It’s twenty times better to be friends
with someone
than it is to be in love with them.”

I think he’s right and besides,
it’s raining somewhere, programming flowers
and keeping snails happy.
That’s all taken care of.

BUT
if a girl likes me a lot
and starts getting real nervous
and suddenly begins asking me funny questions
and looks sad if I give the wrong answers
and she says things like,
“Do you think it’s going to rain?”
and I say, “It beats me,”
and she says, “Oh,”
and looks a little sad
at the clear blue California sky,
I think: Thank God, it’s you, baby, this time
instead of me.

I have emotions
that are like newspapers that
read themselves.
I go for days at a time
trapped in the want ads.

Gee, You’re so Beautiful That It’s Starting to Rain

Oh, Marcia,
I want your long blonde beauty
to be taught in high school,
so kids will learn that God
lives like music in the skin
and sounds like a sunshine harpsicord.
I want high school report cards
to look like this:

Playing with Gentle Glass Things
A
Computer Magic
A
Writing Letters to Those You Love
A
Finding out about Fish
A
Marcia’s Long Blonde Beauty
A+!

I Was Trying To Describe You To Someone

I was trying to describe you to someone a few days ago. You don’t look like any girl I’ve ever seen before.

I couldn’t say “Well she looks just like Jane Fonda, except that she’s got red hair, and her mouth is different and of course, she’s not a movie star…”

I couldn’t say that because you don’t look like Jane Fonda at all.
I finally ended up describing you as a movie I saw when I was a child in Tacoma Washington. I guess I saw it in 1941 or 42, somewhere in there. I think I was seven, or eight, or six.

It was a movie about rural electrification, a perfect 1930’s New Deal morality kind of movie to show kids. The movie was about farmers living in the country without electricity. They had to use lanterns to see by at night, for sewing and reading, and they didn’t have any appliances like toasters or washing machines, and they couldn’t listen to the radio. They built a dam with big electric generators and they put poles across the countryside and strung wire over fields and pastures.

There was an incredible heroic dimension that came from the simple putting up of poles for the wires to travel along. They looked ancient and modern at the same time.

Then the movie showed electricity like a young Greek god, coming to the farmer to take away forever the dark ways of his life. Suddenly, religiously, with the throwing of a switch, the farmer had electric lights to see by when he milked his cows in the early black winter mornings. The farmer’s family got to listen to the radio and have a toaster and lots of bright lights to sew dresses and read the newspaper by.

It was really a fantastic movie and excited me like listening to the Star Spangled Banner, or seeing photographs of President Roosevelt, or hearing him on the radio “…the President of the United States…”

I wanted electricity to go everywhere in the world. I wanted all the farmers in the world to be able to listen to President Roosevelt on the radio…

And that’s how you look to me.

It’s Time To Train Yourself

It’s time to train yourself
to sleep alone again
and it’s so fucking hard.

I drank coffee and read old books and waited for the year to end.

Spinning like a ghost
on the bottom of a
top,
I’m haunted by all
the space that I
will live without
you.

I Live In The Twentieth Century

I live in the Twentieth Century
and you lie here beside me. You

were unhappy when you fell asleep.
There was nothing I could do about
it. I felt helpless. Your face
is so beautiful that I cannot stop
to describe it, and there’s nothing
I can do to make you happy while
you sleep.

Probably the closest things to perfection are the huge absolutely empty holes that astronomers have recently discovered in space. If there’s nothing there, how can anything go wrong?

2. Find a place to sleep where it is quiet,
and sleep there.

3. Reduce intellectual and emotional noise
until you arrive at the silence of yourself
and listen to it.

and our graves will
be like two lovers washing
their clothes together
in a laundromat.

Sometimes life is merely a matter of coffee and whatever intimacy a cup of coffee affords.