Passing has several connotations in the case of race and gender. Let’s be clear, I abhor the use of the word “Pass”. Traditionally it means, to allow through or beyond a gate or barrier, as in to “pass” through. Or to complete successfully; as in “pass” an examination.

As a young child I often found myself having to explain who and what my mother was. My mother was a very fair-skinned black woman. And when I say fair-skinned, I mean she looked white.Passing as a white woman was easy for her. I noticed the way people treated her as opposed to say, my father or aunts and uncles who were obviously black. I never thought that one day I too would be questioned about my race. I can remember my schoolmates questioning me, “Your mother is white?” I would answer, ”No she’s not white. She’s mixed with black, Indian and white blood.” This was a very long explanation for a 10-year-old.

As far as “passing” as white or any other race I never wanted or felt the need to. “Passing” indicates privilege in terms of both gender and race. This is something my mother never felt the desire to do either. In the last year of her life she sat in her reclining chair on a sticky summer night and said, “My skin is white but my soul is black. It’s your soul that makes up who you are. If you hate someone that’s coming from your soul.” She went on to say, “When I rode the bus down south (when I lived in Memphis) I never did ride in the front of the bus although this white man told me I could.” You see it was her view of herself that shaped who she was. She never took advantage of the privilege of looking and appearing to be white purposefully.

“Why are you here?” I was asked that question once while representing the US Department of State in Suriname, South America for a black history month celebration. While the semantics and politics were too much to explain at the moment as a black Surinamese citizen queried my participation in the events, the question momentarily erased my confidence in who I was.

You see it wasn’t the appropriate time to explain to him about how in my household we could only listen to Mahalia Jackson on Sundays or that my mother taught me how to get all the vitamins out of the neck bones by sucking out the marrow. Or how when we were kids we ran and huddled around the television when Aretha Franklin or James Brown was on. Or how my grandmother played piano with Bessie Smith or that slavery was a part of my ancestry. I couldn’t tell him how the conductor of the train told my father he had to ride in another car with my brothers and sisters separate from my mother back in the 1940’s. How could I explain to this man who asked me, “Why I was there?”

This event caused me to think about where I stood in terms of my own identity. There is an intersectionality that I possess that is unique in that I identify as a woman, as black and as transgender. 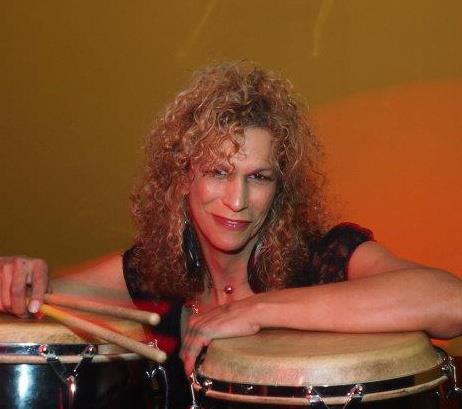 Early on in my transition and path to womanhood I was obsessed with appearing to womanhood I was obsessed with appearing heteronormatively female. There were days when I would not go out of my house if I didn’t feel that I appeared “female” enough. I often find that some of my sisters also obsess with appearing undoubtedly and unmistakably female. As trans folk we often go through great lengths to physically match the soul and spirit in which we were born. We will even risk our health to make sure that no one knows.

The idea of being “passable” is a societal construct in which only those that meet certain physical standards are allowed to “make the grade” if you will. So why is it that so many trans folk put such a priority on appearing heteronormative?

Appearing heteronormative gives you a privilege and access that those who don’t live with the stigma of being trans will never understand. Others may be able to empathize but to live in our world it takes a lot of resilience. Much like the stigma of being black, being openly trans carries consequences. I can remember some of my early experiences of being excluded and feeling erased as a result of letting people know I was trans.

I am a world-class musician and my resume speaks for itself. I’ve worked for years with groups like The Isley Brothers, Whitney Houston, and many other greats from the genres of R&B, Soul and Jazz. Yet in 2010, I lost a well-paying gig with a band because as they put it “clients were feeling uncomfortable with me.” The person who replaced me couldn’t carry my stick bag let alone measure up to the job I did. As trans folk we jeopardize our careers, our families and many other privileges most people would take for granted. There is pressure to meet sometimes unrealistic expectations of beauty or what is considered normal.

There are those trans folk who are successfully living stealth in society. Living stealth (meaning that no one knows that you’re trans) also carries its own consequences. In order to do that one must sometimes extricate themselves from loved ones or a career and basically start an entirely new life. I never had that luxury. I transitioned late in life and had already established myself in a successful music career and I had a child who I could not bear being apart from. Living stealth wasn’t an option for me.

There is also the issue of safety for reasons to appear as heteronormative as possible. Trans women of color especially face these issues as we often live in communities that lack the resources for understanding what it is to be trans. It is often the very communities which prey upon trans women as we go about our daily lives. As the saying goes in our community don’t let them know your “T” (your truth). The implication of “passing” is that we are somehow deceiving or trying to fool someone else into believing that we are something other than who we are. We are always who we are. As a trans woman I believe I never was male. I may have presented as a boy or a man but my identity, my spirit and my soul has always been female.

It is the constant examination and scrutiny of one’s identity that leads to internalized phobias and stigmas. And internalizing these stigmas and phobias are what lead to risks of great magnitude in terms of health and well-being.

Trans women of color often come from marginalized communities where it’s difficult to navigate just being a woman of color let alone trans. We must remember that we are still living in a society where women are devalued and that being black or a person from a community of color carries with it, it’s own barriers. For a trans woman it can be a difficult maze to navigate through when you add in homelessness, joblessness, violence, exclusion from family and the racial or ethnic communities that you have come from. It takes a lot of resilience to create push back against all of those syndemic factors.

There is still work to be done in trying to dismantle structural oppression and uplift the narratives of people of trans experience. There are those that are out there doing this work. Most of all we need love and affirmation whether it be from a family member, a friend, a co-worker or just someone in our community. Sometimes that is the work that needs to be done. If you are a cis-gender person finding out how to become an ally to someone who is trans is helpful. However, don’t claim allyship without asking. In other words, understand the context in which trans folk live first. Most of all support is what is needed and that can take many forms. Knowing we are loved and appreciated for who we are can go along way.

There was a time when I didn’t love myself. I didn’t love who I was. I felt ashamed of being me and I did not feel that I was enough. With the support of my community and educating myself about who I am, I learned that I am enough. I can truly say that today I love myself. I love my tan skin, the three different types of hair I have on my head. I love my voice, my long beautiful legs, my angular face, my small breasts and my deep-set eyes. I don’t feel the need to change anything to meet someone else’s standard. I just want to live in peace and in happiness.

If “passing” is a test, and it becomes your life’s work, there is something askew. We were not put on this earth to “pass” someone’s test. We were put here to better humanity. These issues that I speak of are human issues not just trans issues. I do think that in society there are certain tests that you must pass but proving your gender or your race should not be one of them.

Read this: How Otherkins Harm The Equality Movement
Read this: I Had Sex With A Trans Woman And This Is What Happened
Read this: The New Face Of Feminism: Intersectionism
Being trans Blackness Gender Heteronormative Intersectionality race Transphobia

The Real Problem Behind Not Picking A Black Bachelor