I’m a 1.5-generation immigrant so I’m like half-FOB-by, which means I still throw up peace signs when posing for pictures. I speak Korean, and I poke fun at Asian moms. I spent my formative years in Guam–an island with tolerance and diversity decades ahead of its time–so racial tension and political correctness were not issues. But there are one or two incidents that stick out from my childhood past. 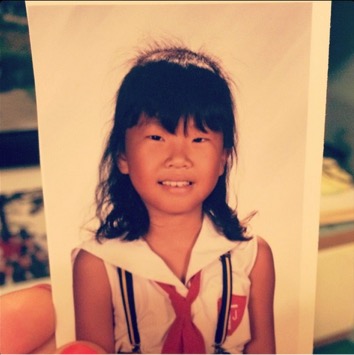 My third grade teacher sniffed around the cubbies. As the clock struck twelve, we opened our lunch boxes in the classroom (my school didn’t have a cafeteria). The smell of my kimchi was unavoidably pungent, and my teacher directed me to eat my rice and fermented cabbage outside. Fortunately, a few friends felt bad enough to join me on a bench. I didn’t call my parents right away, but after school, I relayed the incident. You bet they grew livid and there was a big meeting with the principal that I was not a part of. I believe the teacher, a Caucasian from the mainland who married a native Guamanian, was reprimanded somehow but didn’t treat me any differently the rest of the school year. Still, I saved any kimchi-eating for home.

In ABC’s new, real-life based Fresh Off the Boat, Eddie Huang (full disclosure: I have babysat star Hudson Yang) goes through a similar incident with the stinky noodles his mom packs inside a brown paper bag. With no bologna to be found, he asks for Lunchables post-ridicule.

The show follows an immigrant family pursuing the American dream in Orlando. Randall Park, who most recently portrayed Kim Jong Un in The Interview, plays Eddie’s dad. Randall tells me he identifies with Eddie’s experiences as well as mine. While Randall grew up in diverse L.A. with an array of buddies that would rival a Benetton ad, his friends also freaked out over the Korean food his mom packed for lunch. Anchovies, anyone?

For me, it happened again. My mom never changed her homeland cooking ways, and I was the only one who used the microwave for mac and cheese or the oven for out-of-the-box cakes. By high school, I was packing blander options or had my umma (mom) drop off Burger King sandwiches. During sophomore year though, I walked towards my locker in the morning and a boy remarked, “Did you have kimchi for breakfast?” I whispered under my breath, “Oh no.” I was crushed by a comment from a cute guy and from that point on, had Frosted Flakes because they’re g-r-e-a-a-a-a-a-t…!

I don’t discriminate with food options. Sometimes I wonder if I should have stuck to my parents’ diet. What if I hadn’t conformed? What if the smell of chicken wings was considered disgusting to some? I mean, store-bought bologna, Gushers and cereal don’t constitute a healthy diet. These days, I do find it perplexing that people exclaim their desire to get barbeque in K-Town when they find out I’m Korean. It’s like me expressing my love for cheese to a person from Wisconsin. The flavors of my experience are unique as much as my taste preferences are varied.

I’m sure many of us can relate to an embarrassing moment that increased self-consciousness. But as an adult I am aware of my Asian Pacific American identity – and proud of it. I’m hopeful premieres like Fresh Off the Boat on a major network can raise the overall consciousness of a modern cultural collective, one not so mainstream but valid nonetheless.