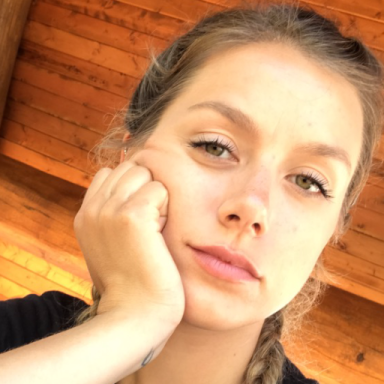 The discovery, made many years ago during the holidays, seemed like a strange miracle at the time. A stroke of dumb luck, the combination of alcohol and genius.

My friends and I were gathered around the kitchen enjoying drinks. Well, everyone else was enjoying drinks. I—in typical “me” fashion—had overdone it a little too quickly and had traded drinking for eating ice cream straight out of the tub. For this reason, my recount of the night is a little fuzzy, but I’ll do my best.

“I forgot I had this.” My friend produced a bottle of whiskey from the cupboard beneath the counter. Without consulting the group, she opened the bottle with a flourish and began lining up shot glasses like a bartender at a club.

“We are not doing shots of whiskey,” someone protested.

“Sure we are,” was the response.

When a shot was pushed in my direction, I waved it away, brandishing my spoon in disgust.

“That’s gross,” I slurred through a mouthful of Breyers.

I can only assume my friends were very convincing or my refusal came across as half-hearted. Either way, I found myself sitting with a shot of whiskey in one hand and a tub of ice cream in the other.

I tipped my head back, held the whiskey in my mouth for half a second, and spat it out directly into the ice cream.

There was a pause as everyone struggled to swallow their own mouthful of fiery liquid.

“That was nasty,” said one friend.

“You just ruined a whole tub of ice cream!” commented another.

And I did try to eat around it. But you can’t really eat around whiskey that’s begun melting into ice cream and so sure enough, I ended up just spooning the concoction into my mouth in the careless manner of an intoxicated person.

“This is actually really good.” I smacked my lips. “Can you pass the bottle?”

“You’re very drunk,” my friend lamented but she passed me the bottle, and watched me pour a little (a lot) into the tub.

“You have to try this.” My enthusiasm sobered me up. “Am I losing my mind? How is this so delicious?”

The tub of ice cream and bottle of whiskey was passed around the kitchen and everyone was in agreement—the mixture was very tasty indeed.

“Is this a thing?” someone asked.

It turns out it is a thing. I don’t know why it took me years to finally look into this, but if you search “whiskey and ice cream,” a slew of results will pop up. There are recipes for whiskey and ice cream cocktails, floats, and even how to make whiskey ice cream in your kitchen. Blogs have posts on which whiskies go well with which ice cream and even list reasons why this pairing is so tasty. According to The Whiskey Wash, a site dedicated to all things whiskey, “ice cream’s bland, sweet creaminess benefits from the kick of whiskey, and whiskey benefits from ice cream’s tempering influence.”

Many articles, including the one I quoted above, state this pairing is perfect to take pleasure in during the sweltering heat of summer, and with this I wholeheartedly disagree. Perhaps it’s because I first discovered it during the holidays, but I believe whiskey and ice cream are meant to be enjoyed together during the chilly winter months. What better way to keep yourself merry and bright while also eating dessert? The fact that it can be combined into a drink is an excellent excuse to have more than one. Deck the halls with bottles of whiskey and tubs of ice cream I say!

To wrap things up, my first piece of advice to you is not to wait until you’re half in the bag to try this creation yourself. My second piece of advice is not to do what we did, which was pour half a bottle of $120 Booker’s Kentucky Straight Bourbon into a $5 tub of ice cream. Do your research, find out what you like, and enjoy responsibly. Cheers!

Stitched with the thread of promise.

The 5 Stages of Breakup Grief