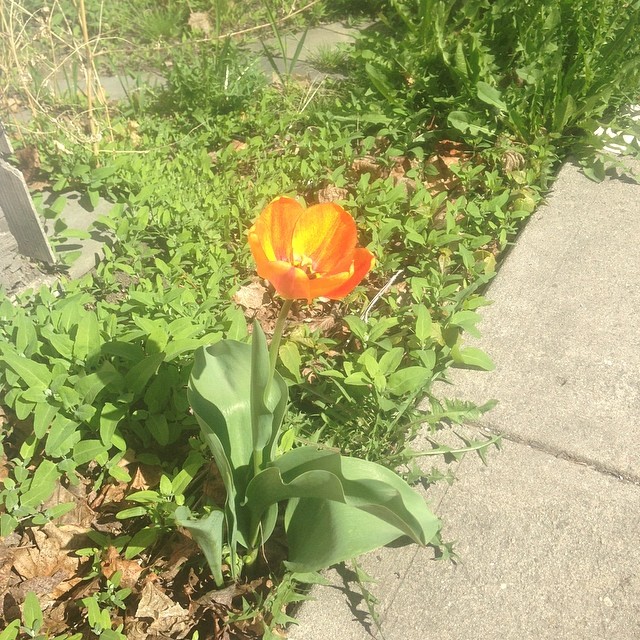 My grandmother’s couch is in the basement. Eventually I had to concede that it’s almost comically small and I’m the only person who fits on it comfortably so it went into a place where no one felt obligated to pretend like it was their seat of choice. I probably still sleep on it on nights when I’m up too late and can’t stop my mind from racing. He comes down and covers me with a blanket but doesn’t ask me to come to bed because he knows what I’m like to sleep next to and is probably secretly thrilled that he has a night off from sleeping next to tossing and turning. I constantly complain about the wifi speed and how it’s bullshit that you have compromise on megabytes when you live in the country. I still suck at gardening but have somehow managed to grow herbs that are actually doing surprisingly well. He’s hung spider plants and aloe vera all around the house and it infuriates me that I spend all this time trying to be like the Barefoot Contessa and trying to have this beautiful, sprawling garden but end up just buying all my produce because I am inept and he could probably whisper at a tree and it would start growing fruit. We’re always playing records and he yells at me when I order Top 40 albums from Urban Outfitters on vinyl. I’ve still never gotten into fishing. But we both drink black coffee now and I wonder how I ever insisted on needing soy milk to make it palatable. Whenever people come to visit they remind me of City Me who was manic and high strung and worked 11 hour days and frequently woke up having nightmares about her email. They comment about how calm I am here. How mellow I seem. They probably make jokes about how scary it is to see me actually calm, and poke fun about when I’ll eventually snap and go back to civilization. And I just laugh it off because I know that as cliché and stupid as it sounds, my heart always belonged out there. So even though I miss things like delivery and public transportation and block parties, it’s worth it. We’re worth it. I decided to compromise and build something new entirely because if I’ve done it before by myself how much better can it be when you do it with someone else. I decided that just because I didn’t need him, and never will, I wanted him. And so I let him move my grandmother’s couch into the basement because it really is kind of small. And because when you decide to let someone in, compromise doesn’t have to feel like giving absolutely everything up in order to make room.

Learning To Love With Type 1 Diabetes