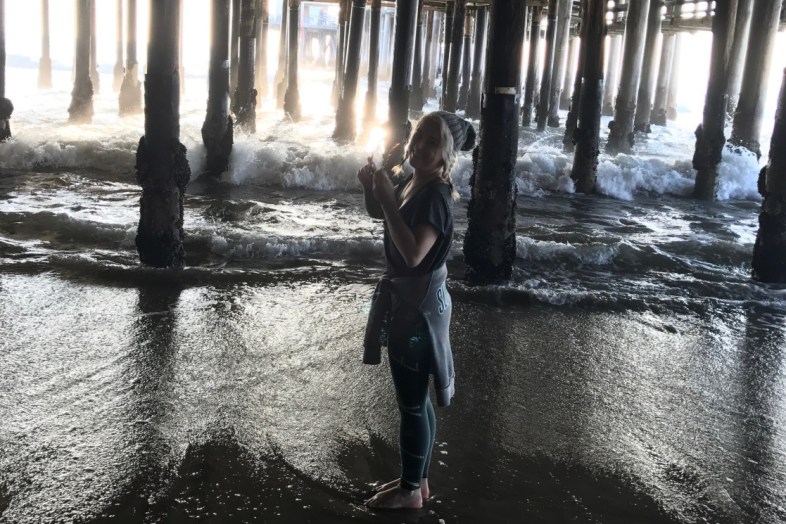 Blood makes up 7% of the human body. The average person contains roughly 8 pints of blood, made up of 55% plasma, between 200,000 and 500,000 platelets, between 4000 and 11,000 leukocytes (white blood cells), and up to 11 million erythrocytes (red blood cells). The primary function for red blood cells, is to carry hemoglobin throughout the body and distribute oxygen to our cells and tissue. According to Mayo Clinic, any level of oxygen in the blood below 90% warrants immediate medical attention.

When I was little and I would cut my fingers or bite a hangnail off too aggressively, I would always suck the blood out. Retrospectively kind of gross, but I was always certain I could feel the oxygen coming out of whatever wound I was nursing.

I was positive that I could taste it. That I could feel those little, tiny, microscopic air bubbles pulsating out of my body and tickling the tip of my tongue.

I was positive I was the only one who knew this secret. This somehow, illusive invisible air supply was only known by me. That this discovery, this sensation, was further confirmation that I was somehow more evolved, more advanced, more intuitive, more perceptive than my friends who instantly went running for bandaids after every paper cut or finger prick at the nurse’s office.

I was positive, that I was magic.

I’ve always wanted to be extraordinary.

Growing up just saying, “I live near farms with horses!” wasn’t enough so it morphed into I live near a place where horses can ACTUALLY fly when I would brag to the other kids at my school. When I would read stories about coming across magical lands or portals in unexpected places, I would search the woods in my backyard basically praying that one of those would open up in a tree or behind a piles of sticks just for me. Sure, I could retell the tale of Narnia, but internally I desperately wanted my own personal version.

Having a wild imagination coupled with a severe fear of mediocrity (but obviously not having the vocabulary to describe what that was because I was a child) just made my ultimate goal to be the “best.” The most talked about. The most enviable. The most special.

It was a pursuit of being extraordinary.

In grade school it wasn’t enough to read stories of the long, lost Russian duchess Anastasia, so I would convince my friends that I was probably related to her. In middle school it was me firmly believing that playing “cat scratches” or “light as a feather” wasn’t just a result of too much sugar and a lack of sleep and preteen giddiness that made magic; it was me because I was an actual witch.

And in high school and beyond? It just meant I was stupidly, blindly competitive.

The Type A and Type B personality theory describes the idea that people can be divided into two distinct personality “types”. Type B being more relaxed, more passive, and more easy-going; while Type A is more ambitious, difficult, and competitive. Studies done in the 1950s by  cardiologists Meyer Friedman and Ray Rosenman showed that individuals with Type A personalities were double as likely to suffer from high levels of stress, magnesium deficiencies, and cardiovascular problems.

When I was in college and dating a guy who smoked weed daily and never rose above a 5 on the stressed scale, I talked a big game about the importance of R&R. Doing nothing all day was great, sitting on the couch binge watching TV hand in hand was absolutely my scene. I was the definition of chill, so easy breezy I could’ve been the poster child for Covergirl. Relaxed? Hi, nice to meet you. That was so me.

Meanwhile I was taking two classes above our University’s max allowed credits, working full-time as an assistant manager of a local business, performing in shows almost every night, and living by myself completely out of my own pocket. All while maintaining the illusion that I was the cool, relaxed, chill girlfriend who slept 8 hours a night and never wanted to fight or got nervous about where he was when he’d disappear.

Sure. I was absolutely Type B.

I’ve always cared about winning, even when I would never have admitted that out loud.

It’s why in elementary school when I was too small to handle a basketball in gym class so the teacher opted to toss me a volleyball instead, I rejected it and pretended like I just didn’t want to play. Perception is a powerful thing, and even 8-year-old me understood that it was better to look like I didn’t care rather than admit I was incapable of something. Even then I knew: it’s better to look like you were in control of the situation rather than admit that you’ve lost.

When I was deep in the middle of my theatre career, you never would’ve known when I was disappointed. I cried over roles and criticism exclusively behind closed doors and only to people who I knew would keep my shame a secret. In my mind, part of being a winner was (and is) maintaining the exterior of one — even if internally you feel like you’re absolutely nothing. So when I lost out on a role that I’d wanted since I was old enough to work a walkman, I smiled. I brought the girl who got it flowers on opening night. I congratulated her endlessly using words like “lovely” and “mesmerizing” and “wonderful.” She might have had the big solo and the starring role, but it was fine because look how good I was doing despite not getting to sing those 4 minutes and 11 seconds in the spotlight. Internally I felt completely broken and like all of my work was for nothing and I’d been completely slapped in the face by loss, but on the outside I was rising above.

I’ve joked about it, but to me one of the best things you could possibly say to me is some variation of, “You’re right,” or, “You win.” Even when I know for a fact I am right, and I am in some way or another “succeeding”, I’m always chasing the affirmation from somewhere else. The blue ribbon that says, “You did it.” The basketball that no one thought I could handle. The role that I know I deserve.

Maybe self-success is never going to feel worth it if it’s not coupled with the gold star from somebody else.

1:  a person who puts on a false appearance of virtue or religion

2: a person who acts in contradiction to his or her stated beliefs or feelings

Calling someone hypocritical is a favorite insult of millennials. It’s a gotcha moment. An “I see you.” It’s a verbalized ripping down of whatever veil so-and-so has carefully concocted and snarkily reminding them that they are, in fact, just as human as they’ve tried to pretend they’re not.

But the thing no one cares to admit when they’re tossing out “hypocritical” and “contracting” onto anyone passing by?

It’s that we all are.

And we’re all just praying that nobody notices.

I’ve always wanted to be extraordinary. Magical, special, outstanding, exceptional. Anything above average. That’s what I wanted to be.

Whether it was being convinced that I’d figured out all the secrets of how the human body truly works, was living a life more fantastical than anyone else, or was miles ahead of the rest of the runners on the metaphorical track – that’s what and where I wanted to be. That’s who I wanted to be.

So I danced the hardest, belted the highest, and lied my way to the proverbial top. If being extraordinary was the ultimate goal I wouldn’t stop until I was breathtaking.

Except…even in my pursuit of the ultimate goal I was hiding my deepest, darkest, most poignant fear.

And that’s that ultimately, I’m just a person.

And I hate admitting that more than you could possibly imagine.

Because there’s nothing magical about humanity. Nothing special about settling for average. Nothing spectacular about being like everyone else.

The truth is, we’re all probably on the same playing field.

And we’re all also pretending like we’ve got ourselves completely together while simultaneously acting like we’re the opposite of who we actually are.

And truthfully? That breaks my heart.

I’m staring at my computer screen for six hours. I sip another glass of red wine while cracking my knuckles in a very boss-ass-bitch way. I’ve distracted myself with stories of friend’s ex, to puppies, to just word vomit from finishing an essay (this essay) about how I’m a walking contradiction for literally an afternoon.

There are arguably 8 pints of blood in the human body, and I would willingly spill a good amount of my own if it meant being able to be completely comfortable with who I am day to day.

The Type A and Type B personality theory divides us up based on who is more likely to freak the hell out versus keep their cool under unexpected pressure, and I would give up a whole lot to be able to not care about how you’re going to talk about me behind my back after I go home at the end of the evening.

I recognize how I may never be able to actually catch it.

Blood makes up 7% of the human body. The average person contains roughly 8 pints of blood, made up of 55% plasma, between 200,000 and 500,000 platelets, between 4000 and 11,000 leukocytes (white blood cells), and up to 11 million erythrocytes (red blood cells). The primary function for red blood cells, is to carry hemoglobin throughout the body and distribute oxygen to our cells and tissue. According to Mayo Clinic, any level of oxygen in the blood below 90% warrants immediate medical attention.

I ripped off another piece of my pinkie cuticle today. The blood oozed and rippled down my finger.

And I instinctively put it into my mouth, and sucked until I felt the familiar sensation of an illusive little air bubble on the outer edges of my tongue.

Maybe I’m never going to be extraordinary, or magical, or anything.

But I’ll tell you what. I’m never going to stop trying.

To Be Honest, You Never Deserved The Love I Gave You

What I Would Tell My Younger Self: ‘You Have To Be Strong And Then You’ll Be Happy’