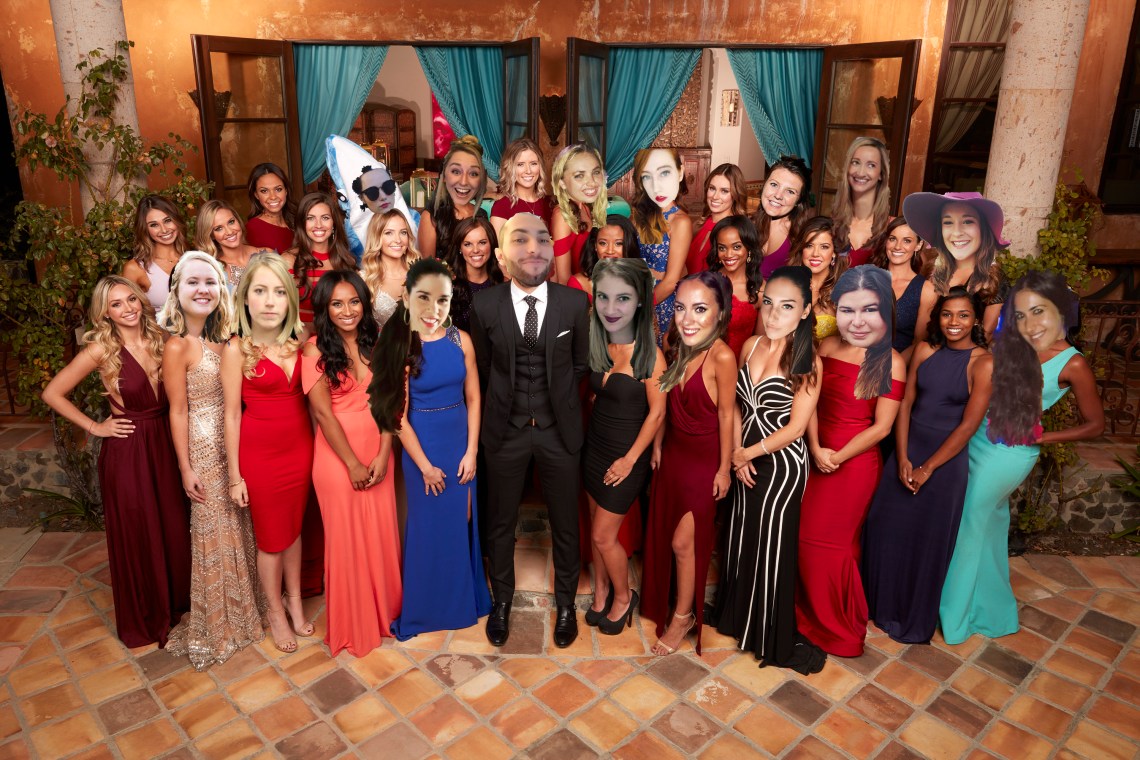 🌹🌹🌹Chris Harrison Voice: Welcome to this season of, The Bachelor!🌹🌹🌹

Unfortunately, our bachelor is not the devilishly handsome man in the very professional photo you see above (but he’s great, so tweet at him or something). Instead this season, PICTURE THIS:

We’re blessed with a semi-traditional, 6’4″ dreamboat from Colorado. He’s the middle child in a family of five, and is the stereotypical protective older brother to his younger sister (something that is definitely emphasized in episode one in many aw-inducing shots) and really loves his mom. He wants kids, at least two, and will name the boy after his dad. He wears that same J Crew button down all basic but still put together dudes wear and says things like, “I’m just ready to meet my best friend.”

The First Night with Limo Exits and The First Impression Rose

First out of the limo is Bianca, who is radiating from head to toe in an unbelievably beaded gown. “Am I the first one you’ve met?!” she exclaims, and goes in for a second, even tighter more poignant hug. “You’ve got such a long night ahead of you; I’m sorry!” Her joke lands perfectly and he laughs into her hair. Their chemistry is instantaneous. “Quick,” he begins. “We’ve got like…2 minutes tops. What should I remember about you?” Bianca pauses thoughtfully. “Have you ever heard of premature ventricular contractions?” He shakes his head. She smiles, “Well, it means that your heart skips a beat. And sometimes no one can explain why.” With that she makes her way up to the mansion, and everyone is internally slow clapping for her.

Early TV godsend Holly makes a pretty forward joke involving the question, “Do you sleep on your stomach?” It goes over pretty well but our good ol’ boy Bachelor is obviously a little flustered. Mom fave Lauren charms him instantly asking him to feel how fast her heart is racing and if she has any lipstick on her teeth. Becca shows up from an exotic vacation with one braid in her hair and gives him a fertility talisman – it’s a little odd but you can tell she means well.

Clad in a stunning black evening gown, Ari makes her way out of the limo looking glowey, smiley, and with an effortless approachability about her. She adorably mouths, “I’m nervous!” at him as she walks his way which lezbereal, not only melts his heart but melts America’s right along with it. He holds her hands to steady them as she says, “See! I’m shaking!” After they hug as she goes towards the mansion she calls over her shoulder, “Come find me later! We can hide out together!” You can tell he’s smitten – and rightfully so.

Katie says approximately 4 sentences after her limo exit, one of which being, “Wow. You’re tall.” Chrissy asks him his zodiac sign (“Ummm, I think Cancer?”) upon which she gets really excited as she too, is a Cancer. Heidi promises to explain MBTI to him when he looks confused but assures him that she knows how to get along with anyone. Mélanie makes a dirtier joke than Holly which no one saw coming, and as she goes back up to the house a cameraman lingers a little too long on her.

Hair in beachy waves and carrying what looks like a little book, Marisa is all bubbly and brimming with excitement that you can feel through whatever you’re streaming the show from. She practically bounces up to him proclaiming, “I’m a hugger,” and wraps him in her arms. She hands him the little manuscript saying, “You don’t have to read it now, but I wrote a little poetry book before coming here about everything I felt about the whole thing.” He seems honestly a little confused, but genuinely also appreciates the gesture. After she kisses his cheek and makes her way inside, he affectionately rubs the side of his face and looks after her warmly.

Nicole keeps it sweet and simple and tells him how excited she is to be there and that she hopes they’ll chat again later. Something about her is weirdly reserved and no one can quite pinpoint it. Kim confesses her love of improv and being spontaneous and asks him to do a trust fall, he jokes about dropping her. It’s a little weird. Kirsten and he exchange a hug where neither is sure which direction the other is going at first, but they’re able to laugh it off. You can tell Kendra is sizing him up from the second she gets out of the limo, and while he doesn’t seem to mind he unexpectedly blurts out, “You’re pretty intimidating.” She laughs and tosses her hair (still blonde – if you were wondering) and throws back, “Yeah…I get that a lot.”

Last out of the limo in all red is Rania. He says how excited he is to meet her and she nods along, sort of quiet. “What’s up?” he presses. She slowly shrugs, widely gazing up towards the sky. “You know,” she says, thoughtfully. “I just never really saw myself in this situation. It’s kind of crazy, if I’m being honest.” He gently pulls her chin back down, making deep eye contact. “I like honest.” Without missing a beat, “Same.” she says back. There’s a moment in which you think they’re going to kiss, but she resists. “I’m going to see you inside, right?” He nods. “Definitely.”