A teenager just yelled at me at an event which is a perfect example for how I don't know how the Internet works even though it's my job.

“Um…what are you doing?”

I looked up from my phone to a pair of VERY furrowed (but I must admit ~*totes on fleek*~) eyebrows. The girl staring back at me could not have been more than 18 but regardless, she sent me, a 26-year-old woman with a pretty cool job and the ability to buy my own Frye boots, into a nervous tailspin.

The fleeked out brows raised up into one of those cool-but-bitchy girl “oh REALLY” faces. I instantaneously felt the way I felt on the bus in middle school when everyone else had someone to sit with and I was by myself listening to Celine Dion’s greatest hits on my walkman. (To be fair I was probably sitting alone because The Power of Love is not nearly as much of a banger as Genie in a Bottle…but I digress.)

“Oh so you just get to jump to the front of the line AND take a chair? Must be nice.”

I’m one of those writers who is immensely inspired by other writers. I KNOW. Go figure. Fucking statement of the century. But in a similar fashion to when teenaged boys are turned off by authors who are not men, I typically gravitate more towards female writers. I read Sloane Crosley, Lena Dunham, Amy Poehler, and Katie Heaney before I pick up a copy of something written by a David or a Matt. I’m not saying that men are not inspiring, just typically I’d rather read something written by someone who understands what it’s like to get stabbed by an underwire bra.

Some of my favorite women in comedy are YouTubers. I used to hide this fact like it was an Intervention-worthy secret. Like the fact that I enjoy Mamrie Hart or Hannah Hart was in the same vein as eating laundry detergent or the interior of couch cushions. For a long time I felt like my enjoyment of YouTube was immature. That it was something that someone in their mid-twenties shouldn’t get or should pass on in favor of Downton Abbey and NPR.

But then I became really fascinated with the business side of YouTube and digital media in general and I realized that it wasn’t immature, it’s just where entertainment is headed. And, typically, when new technology is introduced young people (i.e.: the 16 to 20 demographic) are the first to pick it up.

That and I decided…fuck it. Like what you like and don’t let people make you feel bad about it.

One of the first women on YouTube that I admired, looked up to, and idealized was Grace Helbig. I won’t bore you with Grace’s backstory but essentially she’s a very, very funny lady who initially planned on being a comedian in “traditional” (blech on that word) media, but found a home and success online. She self-describes herself as “the Internet’s awkward older sister” and her work and overall comedic style is hysterical and right up my alley.

Grace’s career is very much something I aspire to emulate in my own way and I’ve followed her pretty closely over the past two years. I watched her E! show, listened to her podcast on all of my commutes, and devoured her first book when I was home for the holidays in 2014. So this past week when her second book was released, and I found out that a signing was happening twenty minutes from me in Seattle, I was super amped to go.

I paid for my tickets, actually washed my hair for a change, put on my favorite “Never Read The Comments” tee and headed to the bookstore excited to take a selfie with someone I admired.

What I did not anticipate was the overwhelming sense of un-coolness that would come over me from being surrounded by that coveted 16-20 demographic.

Fleeked Out Brows was none-too impressed when my dumbass went the wrong way and thought the front of the line was the back. She made it a point to give me the classic girl up down look, and apparently didn’t think my tee was nearly as witty or poignant as I do. And after making sure that I knew I was someone who was at this event alone because my only friends were the ones coming through my laptop screen, she did the oh-so-annoying audible whisper thing with her friends about “showing me” as I scurried away.

It was the overwhelming feeling of not belonging somewhere and just like that, I felt like I was too old for YouTube again. And this is coming from someone who paid $200 on merchandise at a One Direction concert.

The thing about feeling like an uncool loser is that even after your terrible teenaged skin has faded and you realize that your first high school break up ISN’T the end of the world, every now and then you still get slapped with the reality that you’re not one of the popular kids. I have a dream job and am working on projects that I’m so excited about and feel proud of and great about, but still one bratty look from someone who is better at filling in her eyebrows than me can make me feel about 2 inches tall. Even when you’re (arguably) a grown up, it’s still possible to feel like the uncool loser you were before you learned who you were.

But you know what’s different about feeling like a lame-o when you’re an adult?

You get over it way fucking faster.

Instead of getting home and obsessing over how much shit that stranger must have talked about you and letting it ruin your day, you lol to yourself and text your friend about how dumb you are for not being able to follow glow tape on bookstore carpet. Instead of caring and dwelling on what other people think about you, you just shrug it off and move on with your day. Instead of going broke for those Adidas sneakers everyone else has, you tromp around in your Target moccasins and throw up your middle finger to anyone who tries to give you shit about it.

Instead of watching your YouTube videos under cloak and dagger and hiding your Sims obsession, you let your freak flag fly and write entire think-pieces on it for all of the interwebs to see.

So even though I remembered how it felt when Ella and Kristina gave me shit for not knowing about oral sex in 6th grade when Fleeked Out Brows made it a point to put me in my place, it took reliving that awkwardness to get over myself and remember that owning yourself and liking yourself is the best part about growing up.

And besides. I got to meet Grace Helbig, one of my comedy icons and someone I aspire to be like. 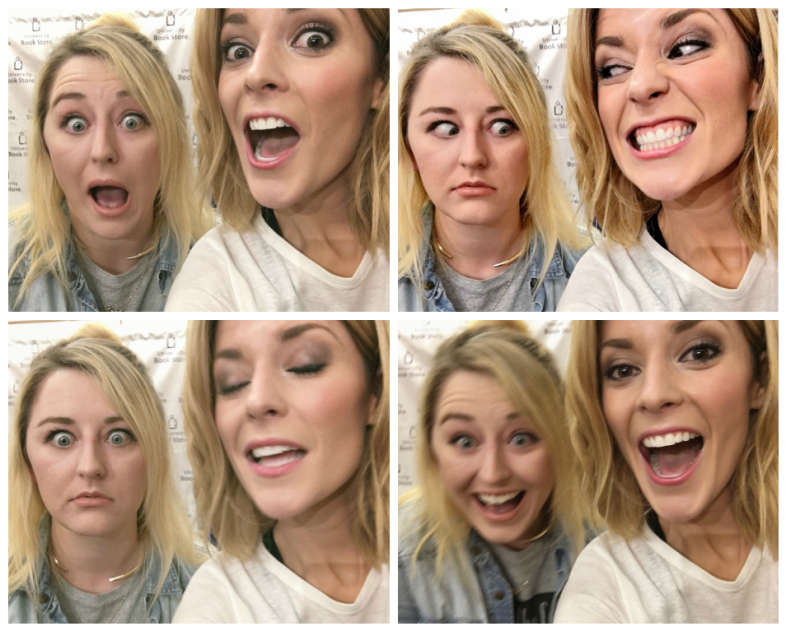 And PS: she LOVED my shirt.

I Don’t Like How Certain Songs Remind Me Of You

I Hope You Discover The Power Of Saying No