Hello everyone. I don’t like being melodramatic, but my boyfriend is spending the night in a cabin with some pretty dark rumors, and things have been getting kinda freaky. I really need some advice.

Let me tell you a little bit about myself. I am a rising college senior, and I live with my boyfriend not far from the campus we both attend. We’ve been pretty serious — especially after he’s gotten back from a study abroad.

My boyfriend Eric is a bit of a thrill seeker. He always ropes me into watching these awful horror movies that I absolutely hate. He’s one of those guys who would prefer something “interesting” happen than just something “good,” so I wasn’t surprised AT ALL when he told me that he was going to spend the night at a cabin that was rumored to be haunted.

I try not to get super nervous about this shit, but I just can’t help it. Before leaving, Eric told me he would text me once he got to the cabin, but they had been gone for three hours, and nothing (it was supposed to be like a two hour drive MAX). He finally messaged me, but they still weren’t even there yet. 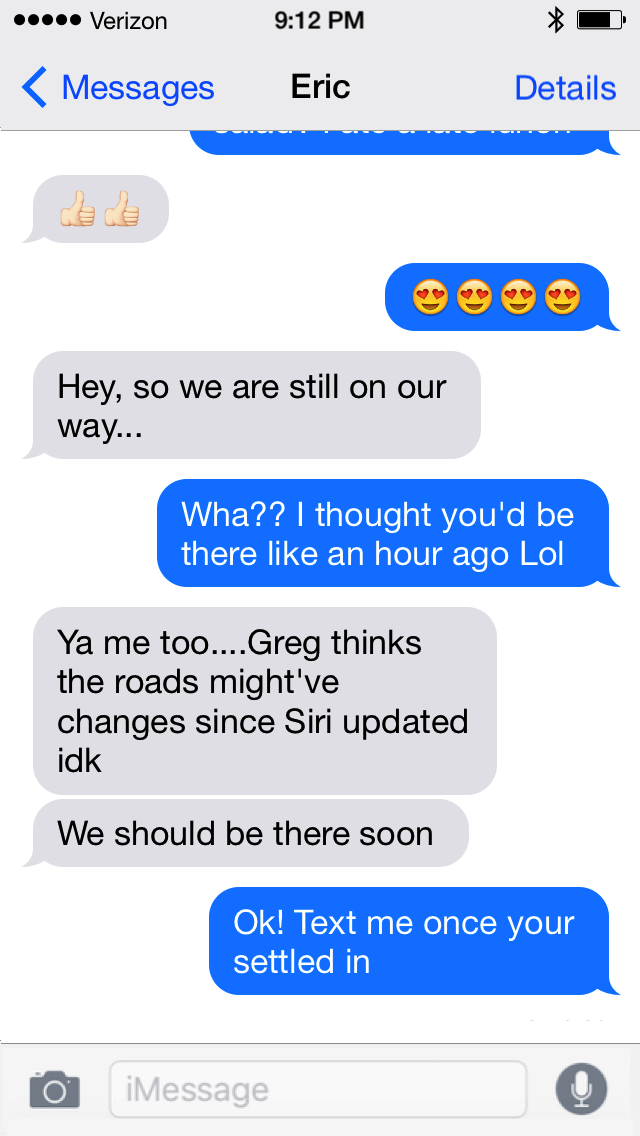 This is when I first started to worry. Honestly, as embarrassed as I am, my first thought drifted to his faithfulness. I am super insecure and it’s something I’m trying to work on, but I still spent fifteen minutes or so after this exchange worrying if this “time lapse” might have something to do with another woman. After sitting myself down and reminding myself how strong our relationship is, and how great a guy Eric is (also it doesn’t really make any sense), I finally stopped being fucking ridiculous and tried to go about my evening.

I went to get dinner with my parents, which is when I got the next string of texts: 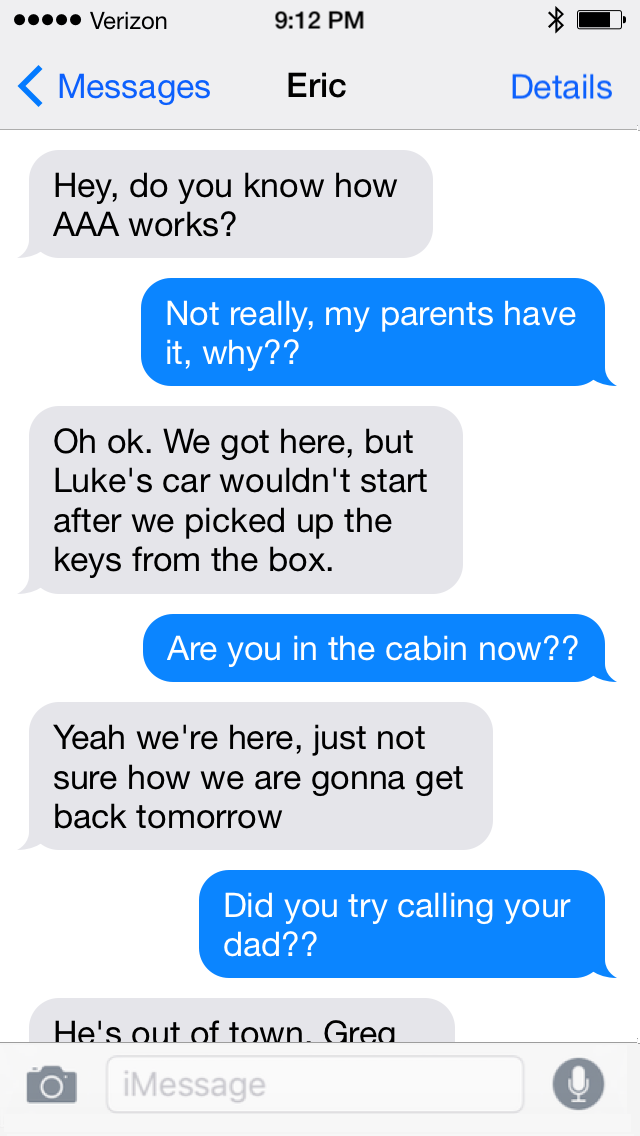 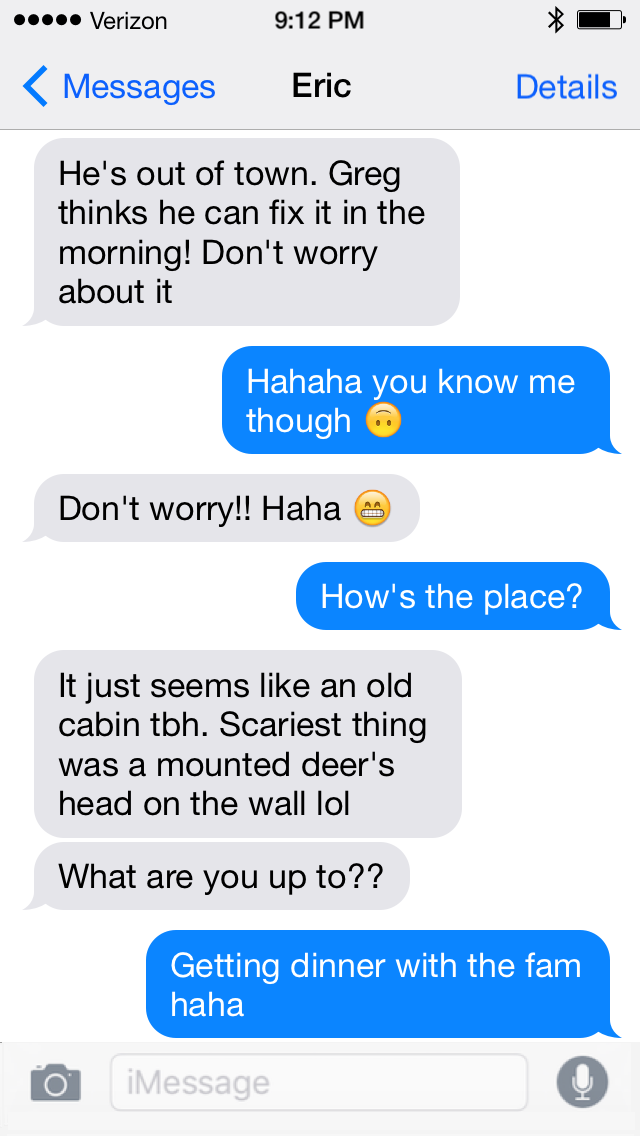 Apparently, the park with the cabin is a very under-funded public park with a super tiny budget. I’ve heard there’s only like a handful of full-time rangers and overseers. That’s why they have a system where you pick up the key to your place in a “box” (idk what that means exactly) rather than checking in at a lodge or administrative building.

I tried to keep it cool with Eric, but I felt kinda uneasy For reference, our original conversation (above) was around 5:30PM. Our second convo was just about an hour later, around 6:40PM.

I was back home and relaxing when I got these messages: 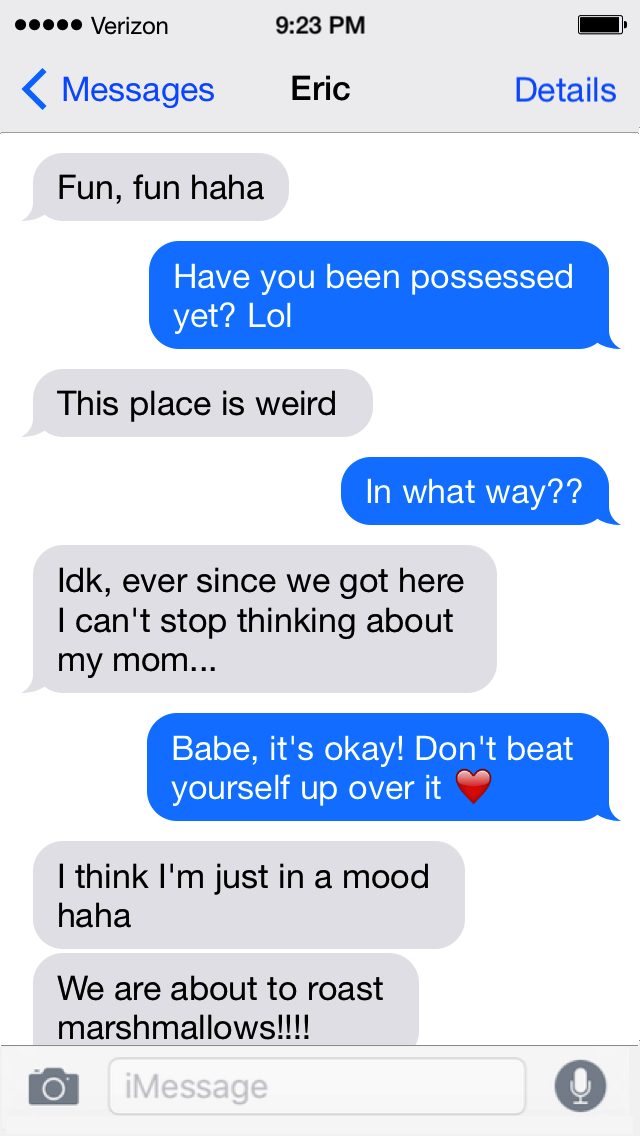 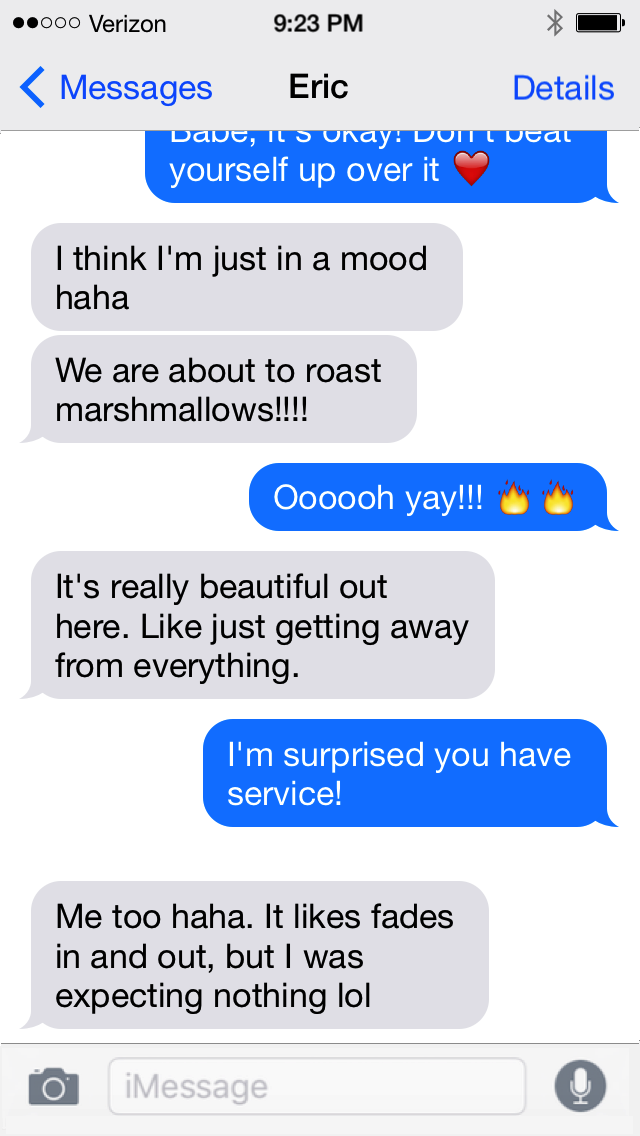 Some side info here: Eric’s mom passed away about a year and a half ago. She had cancer, and it was an excruciatingly long process. She was actually diagnosed only a few months after we started dating. She was a really great woman, and understandably, Eric really struggles with her passing from time to time.

It was weird that he suddenly became fixated with it now, out in the wilderness (probably drinking) with his best friends, but honestly, my fear for his mental health temporarily crowded out my fear of the paranormal. 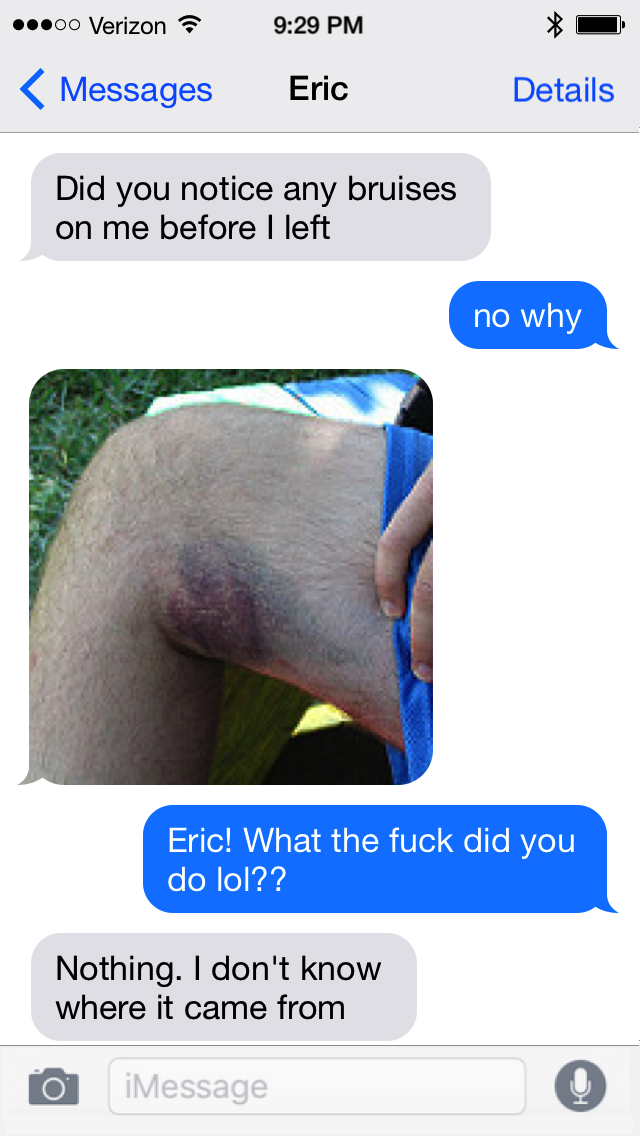 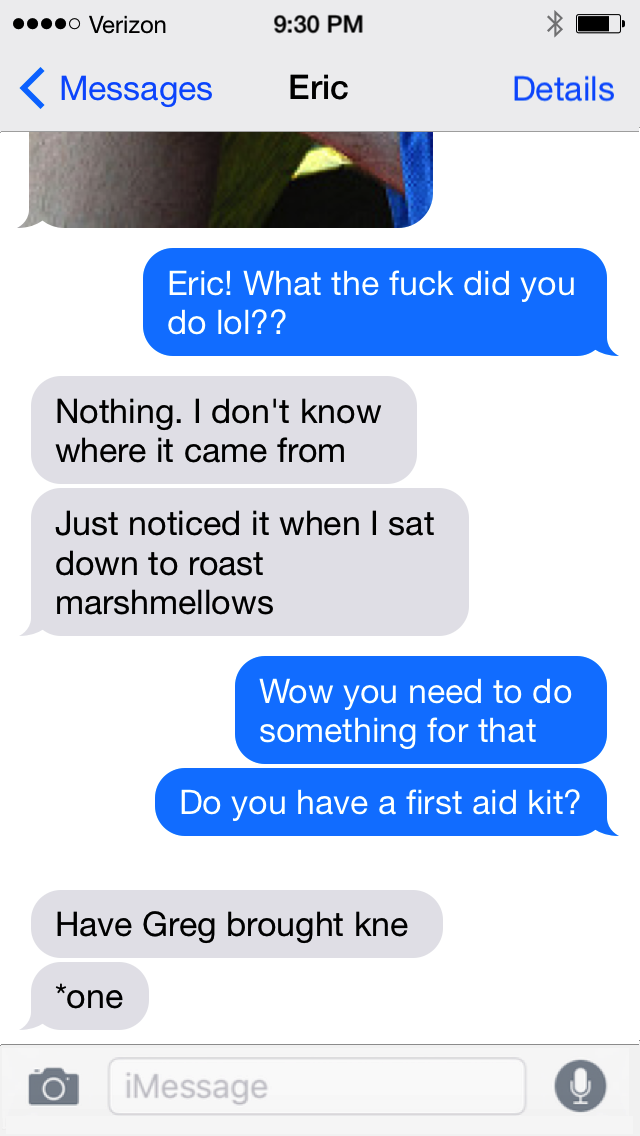 That picture really freaked me out. Like that bruise looks nasty — like he fell off a motorbike or something super extreme. Where did it come from? I’ve been spending the last hour Googling information about the cabin and its associated rumors, but haven’t come up with much. 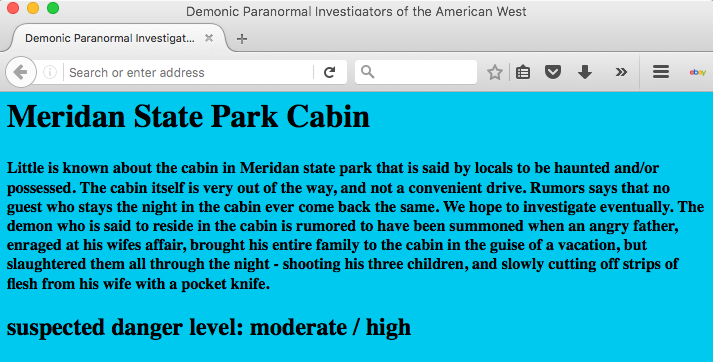 This is the only mention of the cabin that I’ve managed to find on the internet. The website is extremely old, and looks like it hasn’t been updated since 2004 (if not earlier). Despite how… not credible the site looks, reading the “story” behind the cabin made me shudder. 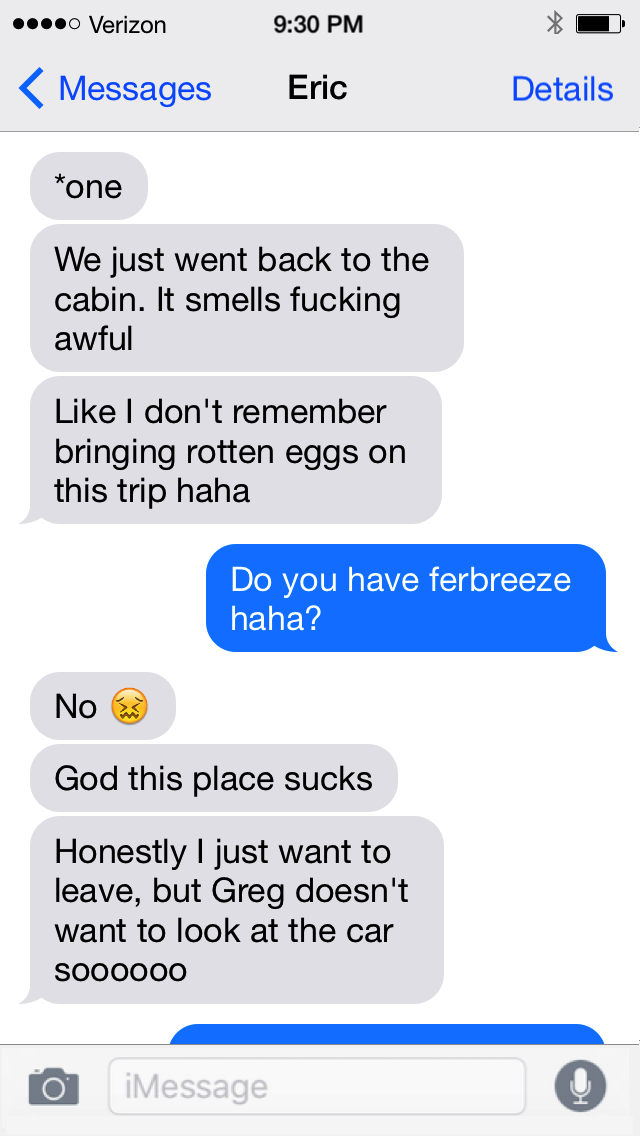 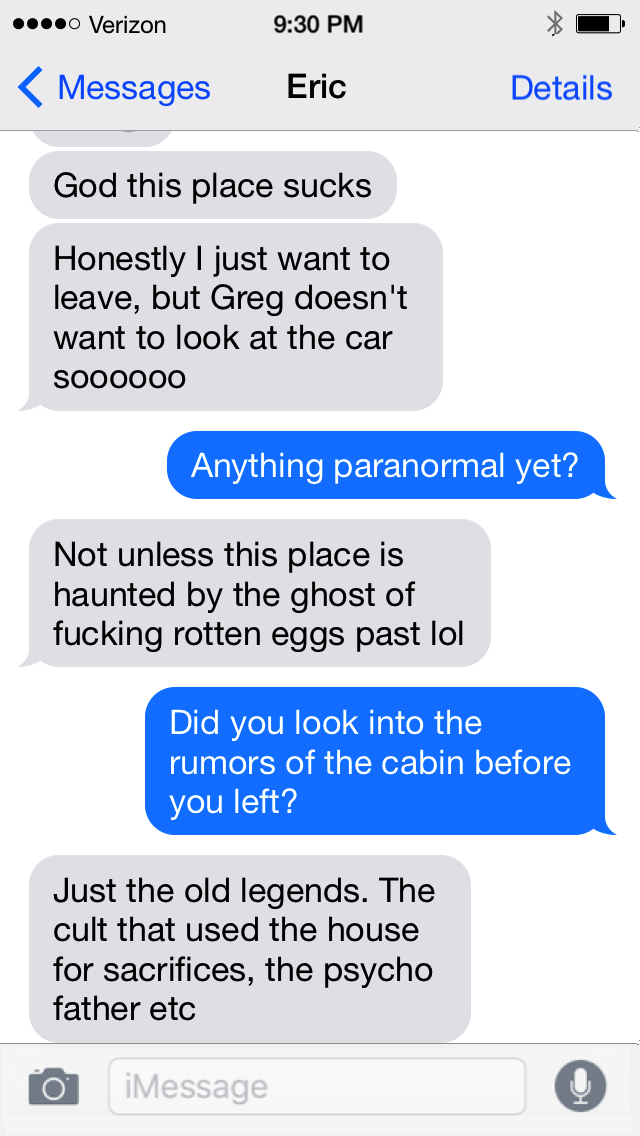 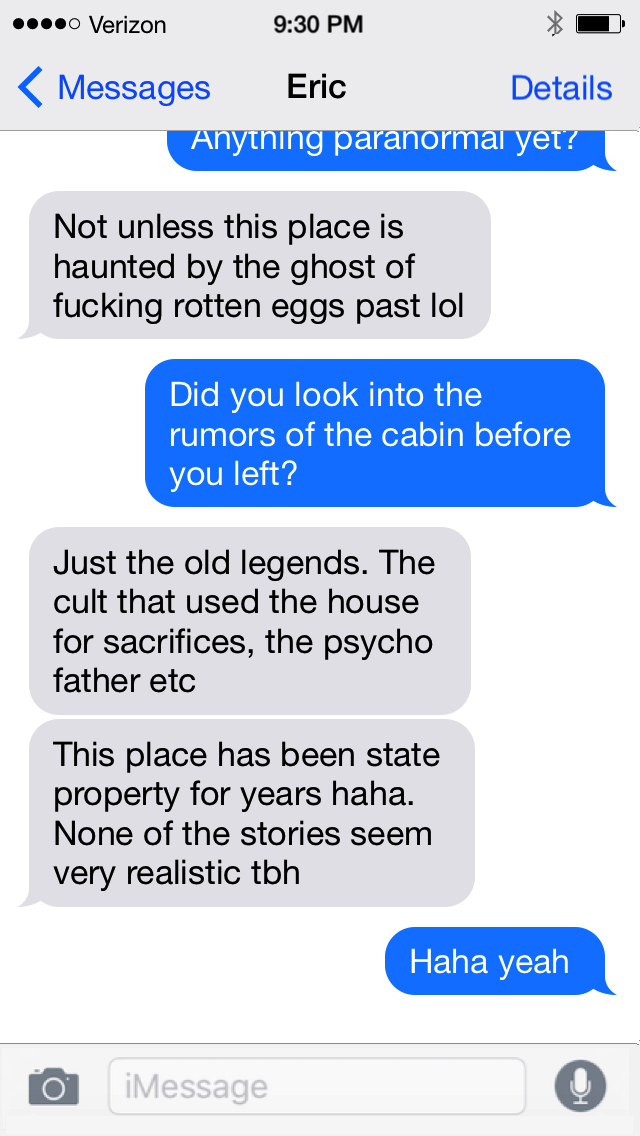 I tried to play it off subtly. I didn’t want him to think I was actually obsessing over this, but I dunno… I was just about to head to bed when I got this last message: 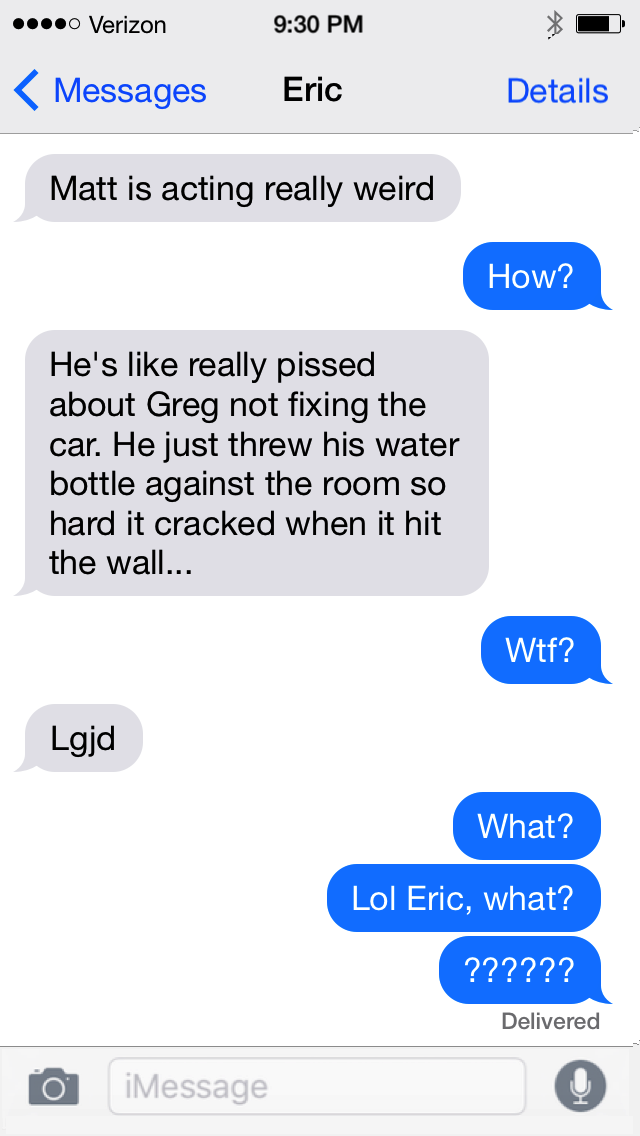 I haven’t heard back since. This message was originally delivered just before 9:00PM. I started working on putting this all together around 9:15, and it’s now almost ten.

What should I do? Am I overreacting? Part of me wants to get in a car and drive up there. Part of me thinks I’m crazy. Does anybody have experience with the paranormal or, god forbid, demons?

So, Eric finally texted me back, but it doesn’t really make me feel that much better…. 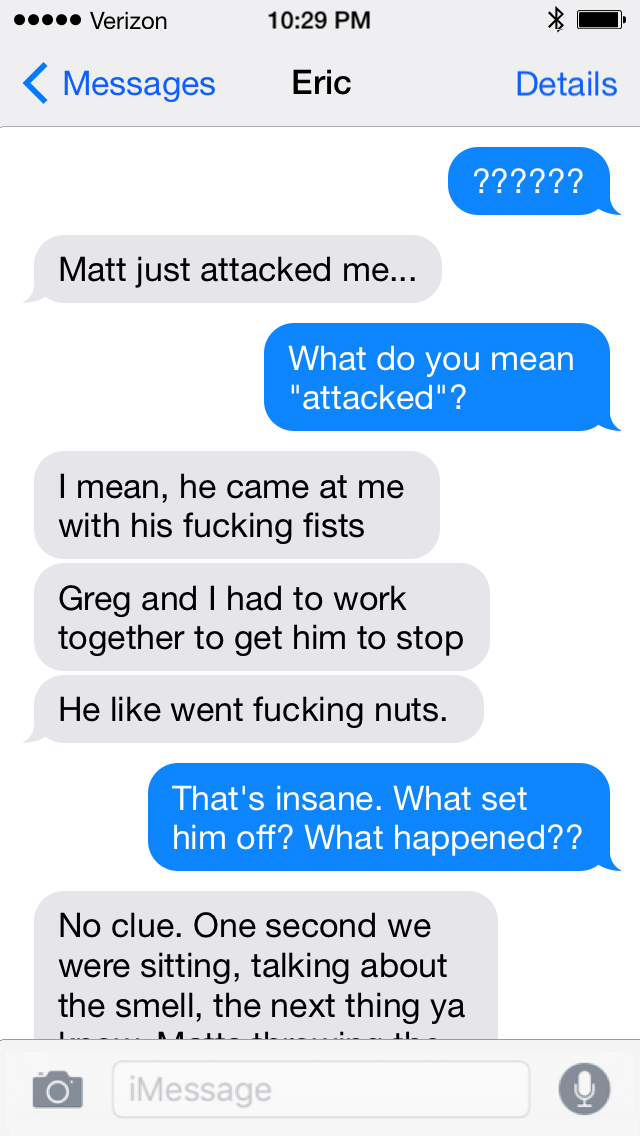 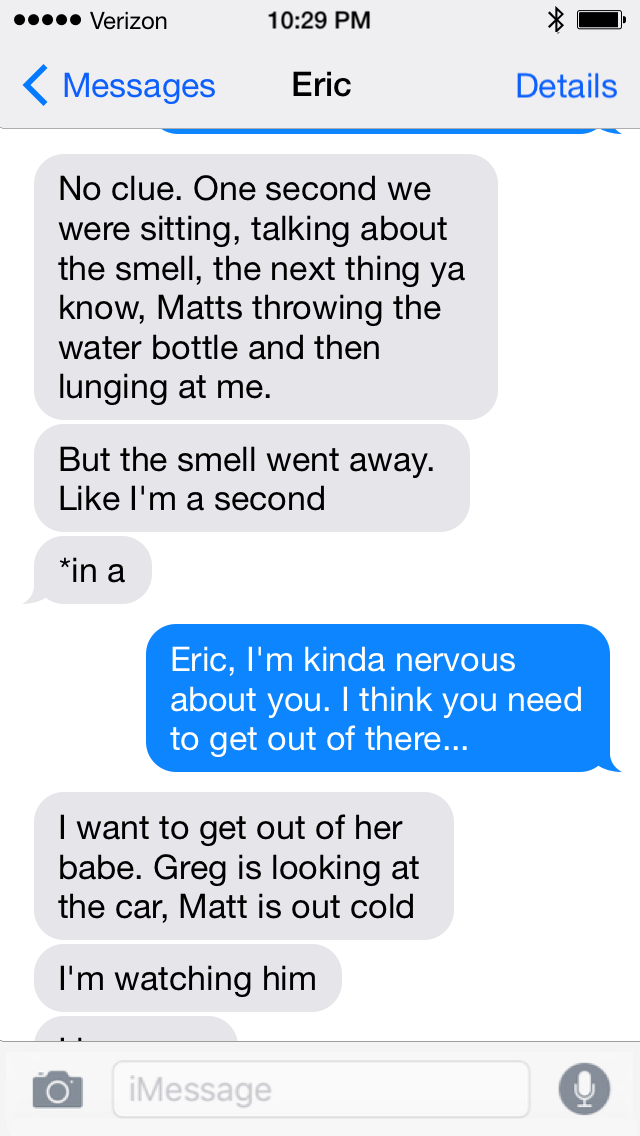 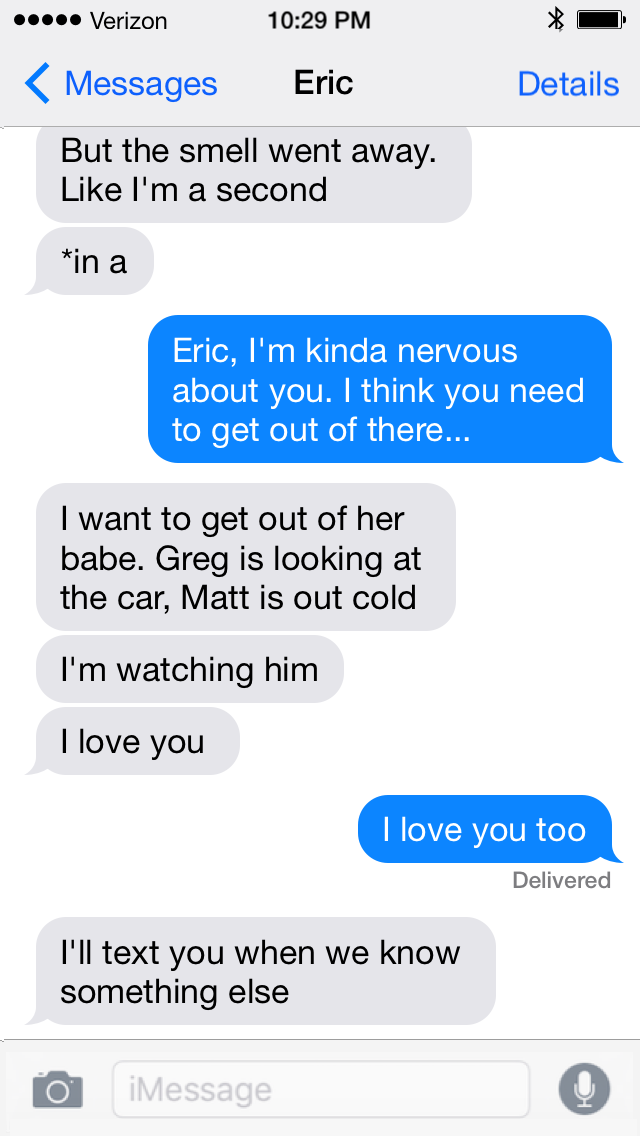 I guess we see what happens next. I’m really freaking out.

I haven’t bothered my boyfriend since he last texted me, because who knows what he’s dealing with. I have done some research though, and I’m becoming more and more convinced that something…paranormal…is happening up in that cabin. And it seems demonic.

Apparently the easiest way to kill a demon is to invoke religion. I’ve been effectively agnostic for the last few years, but I just unearthed by old Bible I was given as a confirmation present. I dunno, just having it next to me makes me feel a little better.

Hopefully this is all a dream / joke / misunderstanding. But I dunno. 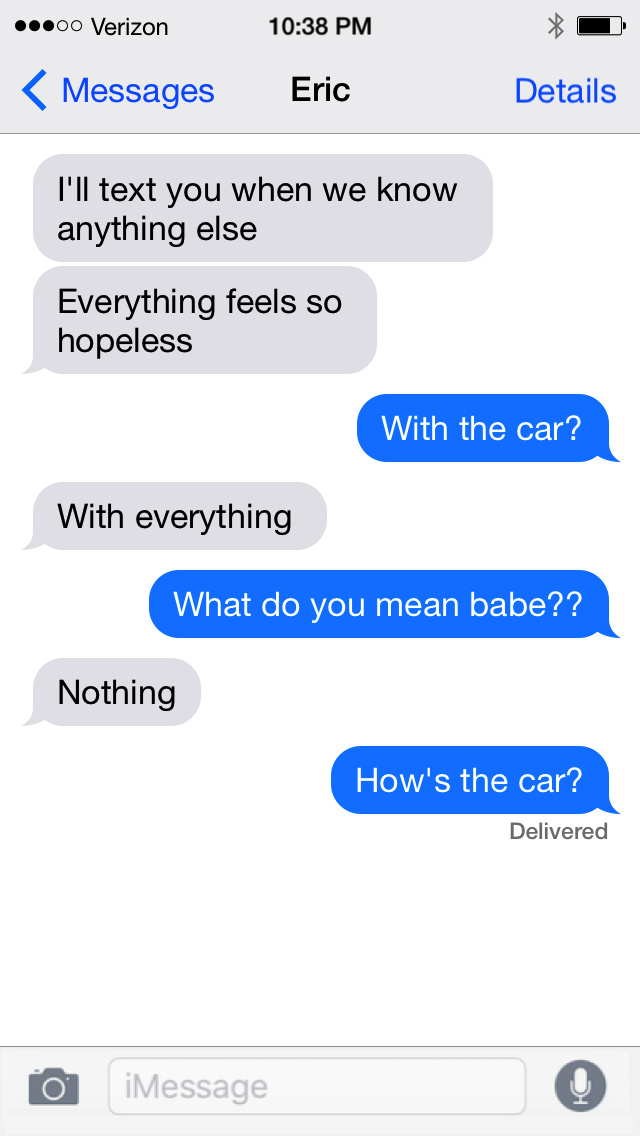 I’m getting really freaked out now… 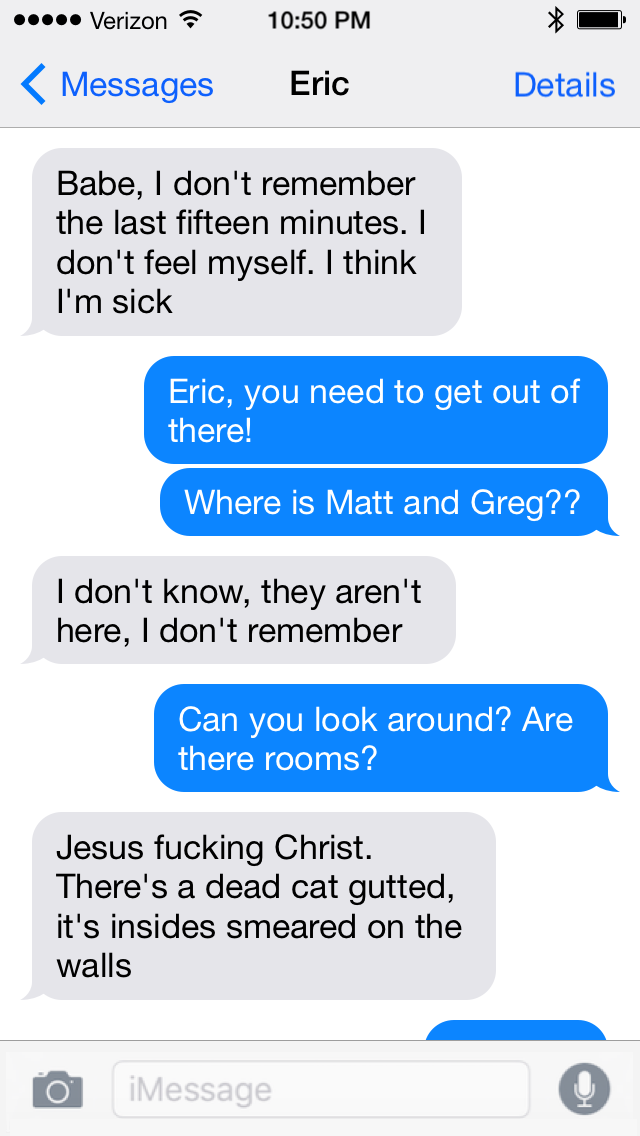 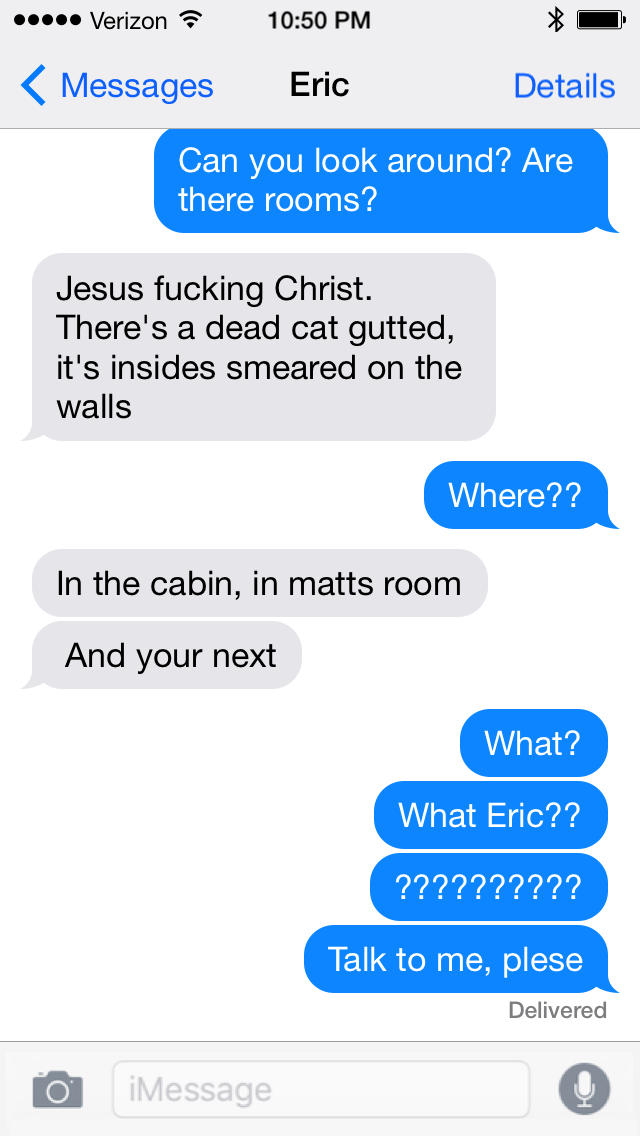 I have never been this scared in my life. For the last ten minutes I’ve been re-reading this messages, hoping, praying that Eric will respond. Will say something. I would give anything to see three little dots at the bottom of my phone right now.

I can’t tell you all how much I’ve appreciated your advice. For everyone who’s stayed with me, and kept with this, thank you so, SO much. However, I am going against most of your advice. I can’t let Eric die up there. I can’t do nothing.

I found the address of the start park online, and directions to the cabin scribbled on the back of some receipt paper. I’m bringing my Bible, my rosary, and all the courage I can muster. When I come back with Eric, I will make sure to update this post.

Have You Heard About What Lives In Teasley Park?

In 1993 Sadie Carmichael Disappeared, And I’ve Never Told Anyone What I Know Until Now (Part Three)