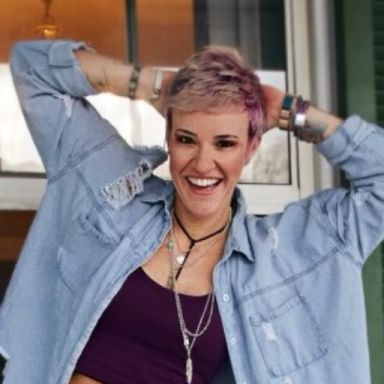 On Monday, July 6, 2020, I woke up, but my hands and feet did not. Why wasn’t that tingling and numbness going away? Surely I couldn’t have slept in such an awkward position that all four of my extremities fell asleep, could I? As the week went on, my legs became weaker and weaker, until I could barely walk my dog around the block. On Sunday, I drove to the emergency room in a panic.

As the doctors ran tests, one of them asked, “Did you Google this? What do you think it is?” Offended that the expert was asking me, the patient, to diagnose myself, I stammered, “Well, I read something about Guillain-Barre… but that seems so rare that I-… I haven’t really considered it a possibility.”

“Right, well, your case is presenting a bit differently than we typically see with that, but all of the other tests are normal, so we’re going to have to wait and see what happens,” the doctor responded. “You could either pull out of it or rapidly deteriorate until you become totally paralyzed and need a ventilator, so let us know immediately if it gets worse.”

And I was on my way.

I held it together until I got home and then burst into tears. My mom’s maternal instincts kicked into high gear from several states away and she FaceTimed me immediately, as if she had been reading my mind. I hadn’t even told her I was going to the ER that day, but somehow she knew I wasn’t okay. I told her that I had been to the ER, how scared I was, and what the potential diagnosis was, and she appropriately freaked out. We cried together and put together a plan for when she could get to Nashville, and I went to bed. Two days later, I called the hospital because I was having double vision in my peripherals.

I left a message with the nurse and told her to ask the doctor I had seen if that was typical and whether I’d need to come back. He called me from his personal cell phone at 5:45 a.m. the next morning and told me to come to the ER immediately. It’s one thing for your boyfriend or your parents to freak out, but it’s quite another for your doctor to freak out. Double vision, as it turns out, is very serious. Terrified, I called a friend to have him drive me to the hospital and watch my dog.

Despite our plan to have my mom meet me at home, she had to come straight to the hospital on the tail-end of her 9-hour drive because I had been admitted. She arrived right after my spinal tap and after another doctor had told me, “It’s probably cancer, MS, or something else. See you in the morning!” Bedside manner was in short supply.

My vision got worse over the next 24 hours, and I lost my balance. I couldn’t stand up in the shower without falling into the wall, and I had the inexplicable sensation of wearing a football helmet. I felt pressure on the sides of my head and around my jawline. The MRI showed demyelination in my brain and spinal cord. My immune system was attacking the protective coating of my nerves, so the doctors gave me high dose steroids to suppress my immune system. The steroids were to tell my immune system, “Hold your fire.” It would be a brilliant strategy under normal circumstances, but voluntarily suppressing someone’s immune system during a global pandemic is suboptimal. Alas, it was our only option.

On the third day in the hospital, I was discharged, but my journey would continue for at least the next three days and, unbeknownst to me, for the next seven months. I left the hospital with a PICC line in my arm, which is basically a tube that goes through a vein accessed via your upper arm that leads to just above your heart, where the steroids are released when you inject them. The nurses showed me how to intravenously inject steroids through the PICC line for the next three days. No pressure, right? There’s nothing scary about self-injecting steroids straight to your heart, particularly when you are a financial analyst with no medical training whatsoever like me.

The stereotypical “roid rage” ensued. I would laugh hysterically, then cry, then sweat profusely, in that order, like clockwork, at specific times of the day. As far as I can tell, Lance Armstrong didn’t even need the bike. I was cycling just from the steroids. My dad had come to stay with me too by this point and quipped, “When you can’t travel physically, you have to travel emotionally.” I laughed (hysterically, of course). My follow-up appointment was scheduled for four days later.

It’s a strange feeling to have your parents drive you to the doctor’s office at 35 years old, but an even stranger feeling to see two of each car on the road and have no idea where actually is the side of each lane because the lines you see on the pavement are double and criss-crossing. At my appointment, a new doctor came in (I think, the ninth one I had seen, by this point?), and he told me he thought I likely had MS. I nearly fainted, and my mom and I teared up. Bedside manner was, again, nowhere to be found.

“They told me it was ADEM (acute demyelinating encephalomyelitis) when I was in the hospital,” I told him. “Why are you saying MS now? I have never had any of these symptoms before in my life, and I suddenly have them all at once. I read online that you can’t technically diagnose me with MS until I’ve had a number of episodes like this over time.”

Then he backpedaled. “Well, we don’t actually know. The lesions in your brain aren’t in the places that we typically see them in MS patients. We also don’t know when, or if, your symptoms will improve.”

The anxiety he caused me was worse than my physical symptoms, and it lasted for months after that appointment. All I had learned during the appointment was what they didn’t know. I was provided neither additional treatment nor hope. I already felt physically terrible, and now it was clear that I would have to diagnose myself and wait to see what happens. I did not want to play both doctor and patient in this twisted dramedy that had become my life.

The weeks went by, but no answers rolled in. Negative after negative after negative. No virus, no bacteria, no fungus, no explanation. Handicapped by my visual and dexterous disabilities, I was only comfortably capable of staring at the ceiling (with an eye patch on) and pondering how I could possibly have landed in this predicament. But the thing was, I already knew.

Fresh off a breakup, and the day before my symptoms began, I read a passage in Robin Norwood’s book Women Who Love Too Much that included the line, “You deserve to be loved, simply because you exist.” It shook me to my very core, in a way that no message ever has. Thirty-four-plus years of endless striving for achievement and trying to feel “good enough” in a world that constantly tells women they are not, and they never will be, came crashing down around me. Add this colossal emotional realization to a heavy workload, artistic and musical aspirations, daily pilates, and recreational sports, and you have one completely overloaded Katilyn. I completely shut down—mind, body, and soul. I was so stressed out and so torn about which direction to head in next that I figuratively and literally couldn’t see straight.

Devoid of medical explanations for my disease, I looked to Louise Hay’s book Heal Your Body for answers. Double vision is not included in her list of symptoms, for which there are mental causes of the dis-ease, but crossed eyes are included. It was right there on the page: “Crossed purposes. A refusal to see what’s out there.” Oof. So true for me. I have always had a dream of being a singer, and I even moved to Nashville in 2019 to pursue it. But I wasn’t doing what I came here to do.

I have a comfortable job in the financial industry, and I’m good at it. I have artistic and musical talents, but I had only been flirting with each as a hobby. I am a decent athlete, having played sports all my life, and I had been playing volleyball consistently since I graduated college. When you have many talents, you have multiple paths to choose from and will eventually arrive at a crossroads, or in my case, a cross-eyes, where you have to pick one. I was clearly refusing to pick one, so my body forced me to stop until I did. While staring at the ceiling, I asked myself, “Is it my life’s purpose to remain an analyst, or is it to be a singer? Should I be an artist or should I be a writer?” I had more than a vision for my future; I had double, even quadruple, vision for my future. Luckily, I only physically had double vision. My symptoms began to heal in an order that would only allow me to focus on one of each of these four paths at a time. My days of multitasking and trying to succeed at all of them had clearly come to an end.

Had my vision healed first, I know I would have dove straight back into everything I was doing, all at once, as if nothing had ever happened. So, my body cleverly healed my vision last. Unable to drive anywhere, I’d have to entertain myself at home. With weak limbs and numb hands and feet, I couldn’t play sports or the guitar. The steroids messed with my vocal chords, so I couldn’t sing for a couple months. Instead, I chose to focus first on what I could do—art. I started to paint, but in a new style that required no precision—acrylic pouring. When my vision had improved enough that I could see up to three feet in front of me without the images being double, I started a detailed colored pencil drawing. When I regained feeling in my fingers, I picked up the guitar. When I regained my voice, I started to sing. When my fatigue started to subside, I began to write songs. My vision took nearly seven months to correct itself. And finally, when my emotional distress subsided, I wrote you my story.

The illness I came down with, whatever it was, was extremely scary and challenging to endure, and I wouldn’t wish it on anyone. But I can see the greater purpose it served in my life. It made me stop, look around at what’s possible for me, and go after what I really want. My vision for my future has come into focus, and I know which path I want to take.

The more things I attempt and succeed, the less I know who I'm not.