By Katie Mather Updated May 6, 2021
Up until I was maybe 6 or 7, my hair would naturally curl in stupidly cute little ringlets. No one in my family had curly hair, so my mom had no idea what to do with it.

You can’t brush the curls because it will make them frizz and angry, so I think she just left it alone and hoped for the best. One day it just unraveled without explanation, and I no longer looked like some very anxious, knock-off version of Shirley Temple. I just looked like how I do now. My parents always tell me they still see my younger self in my face, which I guess I take as a compliment, but it makes me think about how self-conscious I am about the roundness of my face and my undefined cheeks. In high school, I would hide my face under curtains of flat-ironed hair. One time at dinner, I announced that I will always look younger than my age because of the remaining baby fat on my face and my friend, hilariously and without really thinking, asked out loud: “At what point does it go from ‘baby fat’ to just… fat?” I still hide behind my hair.

I have never dyed my hair because I can’t wrap my head around the upkeep. Following specific directions and using specific products and remembering specific rules make my skin crawl. It’s weird, but I know I can easily take care of other people and other living things (except plants, which are impossible, I could manage to kill a fake plant), but I sometimes really fail to see the point of taking care of myself. I’m looking forward to receiving the inevitable unsolicited emails advising me to go to therapy after this statement — but I’m not going to follow this up with a little joke to make it seem light or silly, this is just a fact: It exhausts me to take care of myself. 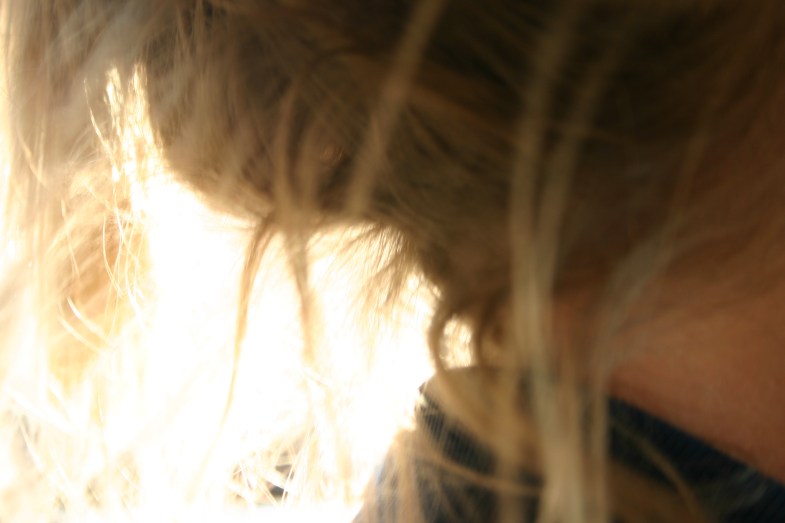 Anyway, hair. I do not dye my hair because 1) I would not take care of it and 2) I change my mind too frequently about everything. I think if I were brave I would dye it pink.

99.9% of the time, I immediately notice when someone gets a haircut. I always say something. This is my only talent. My friend Nick thinks this is the dumbest thing I brag about, yet he is always flattered when I notice his haircuts.

The first half of 2015 was awful and I try not to dwell on it too often because then it feels like someone is sitting on my chest. BUT one of the things I always think about is how I never brushed my hair. My hair was long at the time — I think it had been over a full year since I cut it. I would cut the split ends myself if I ever felt bored and was in close proximity to scissors. My mom, who is always put together and who genuinely loves the activity of getting her hair cut and feels CONFIDENCE and POWER from it, usually berates me until I do something about it — thinking/hoping it will make me feel better too. But I had spent the latter half of 2014 in Europe and stupidly happy and then the first half of 2015 back in California and probably the saddest I’ve ever been, so she didn’t know what my hair looked like and didn’t say anything.

At a certain point, I just stopped brushing my hair. It was disgusting. I would wrap it in a bun and only untie it to reluctantly wash it every other day or so, only to then immediately bundle all of my sopping wet hair, tangled and with soap suds still trapped within the knots, back on top of my head. This process would further feed my anxiety because I was constantly thinking about the day that I would inevitably have to address it. I tend to procrastinate very arbitrary things that drive everyone around me nuts — especially since this was one of the cases where me addressing the problem immediately would’ve actually made me feel better. I know this because the day I decided to fix it (my mom was visiting), I spent 20 minutes losing circulation in my arms from yanking a comb through the dead strands. I later read doing this in the shower makes it easier, but I decided to do it in my dark bedroom in front of the mirror. Because, I guess, drama. Isn’t it stupid that we sometimes know exactly what could help us feel better but we still won’t do it?

A really pretty Cool Girl in seventh grade told me I would look better if my hair was parted on the right, instead of in the middle. And that is actually why my hair is parted the way it is now.

I used to cry every time I thought my hair was too short. I’m not even sure there was a specific measurement that constituted as “too short” to me, I would just be devastated anytime someone cut my hair. I loved having long hair growing up — everyone who was beautiful on television had long hair.

Recently, I grew my hair out. I still go through phases where I’m convinced that long hair is going to fix everything about me. It curled at the bottom and was incredibly manageable, considering I don’t do anything with it other than wash it with drugstore products and then use a comb rather than a brush. Those are my hair tips — I edited the original phrasing of “hair beauty tips” because I thought “beauty” was a bit of a stretch, my hair is just there. My sister, who styles and layers floral-smelling products, has beautiful hair. Anyway, the beginning of this year I felt like I was just floating by a lot and I spent an exorbitant amount of time desperately trying to win the attention of someone who did not at all want to give it to me. My hair grew and grew and grew.

There’s this unexplainable phenomenon where cutting off all your hair is the ultimate symbol of a much needed change. You’ve seen makeover movies. After a disastrous period where I was deliberately fucking one thing up after another as a bizarre form of unnecessary self-inflicted punishment, I cut off all my hair. I did not cry. I did feel slightly better. I don’t think twice before brushing it now.

Hair Mental health No Idea What This Is Wellness